As Private Eye is wont to say, it’s Grim up North London, but if the eponymous characters of that newspaper were to dart out of their shell, they might find a remarkable building peaking its tall spire above the council estates of Kilburn. 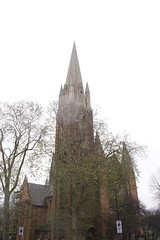 This is St Augstine’s Church, which was consecrated around 130 years ago in the Anglo-Catholic style, and should be high up on anyone’s list of churches to visit in London.

Although officially, it is a mere parish church, as it was built to serve the emergent Oxford Movement, which sought a return to some of the mysteries of the Catholic Church, within an Anglican framework, it therefore had to be built to serve a wider geographic area than most CoE churches.

And as such it is much larger than most churches, and is also known as the “Cathedral of North London“. However, while vast numbers of articles refer to it by the nickname, I have been unable to find out who first coined the term. Could this be a nickname that was created by popular usage, or as a deliberate bit of marketing spin by a former vicar?

Regardless of the origin of the term, it is quite appropriate, for this is a very sizable building, and the church spire would dominate the area, if it were not surrounded by post-war blocks of flats.

Although the church website says that it is open on Saturday mornings, when I arrived, the main door was resolutely locked shut. A chat with some workmen hanging around by a side entrance sent me over the modern brick building next door, which is the home of the vicar.

To be honest, I am a bit iffy about knocking on the door of the vicarage to ask why he is late in opening his church to this camera wielding heathen, but a genial face appeared and was only to happy to let me know that if I pop in via the side entrance, a lady inside will open up the church for me.

It turned out that they were waiting for some extra people to arrive, and then the main doors would be opened. Disturbing said lady, who was busy ironing the vestments she opened up the church and switched on some of the lighting for me.

I had the whole church to myself. 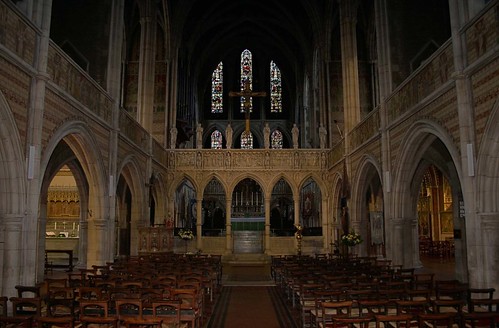 While the exterior of the church is an impressive size, it is the brickwork and tile decorations within that make this such an extraordinary building to visit. The dark brick vaulting is reminiscent of stone cathedral ceilings, and the stained glass drops delights of colour into the central nave.

But lined all around the central nave, and in side chapels are the magnificant tile decorations. Muted in colour so as to not overwhelm the senses, the sheer volume of decoration lifts the building from mundane brick work to artistic magnificance. 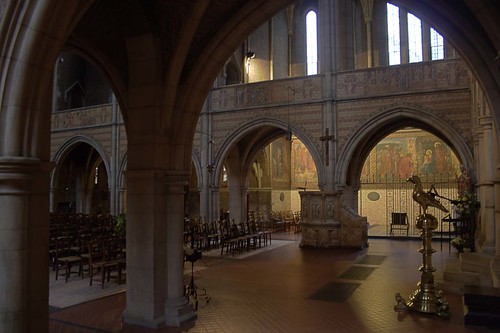 A grand altar is grand, but the side chapel devoted to St Michael has something simply stunning. The ornate decorated ceiling is pure Pugin in concept — although he had nothing to do with the church — and the altar is a golden confusion of religious icons. 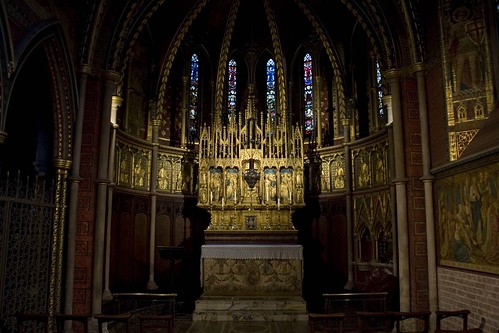 Although Pugin’s influence can be seen here, the alter screens (reredors) were designed by Sir Giles Gilbert Scott, the architect of that bastion of industrial brick, the Battersea Power Station.

Dotted around the walls are a number of mini-shrines devoted to a particular saint or icon and helps to clutter up the otherwise possibly austere layout of the side wings of the building.

Although more light would have helped the photography, for sheer atmosphere as a visitor, the gloom was quite wonderful. 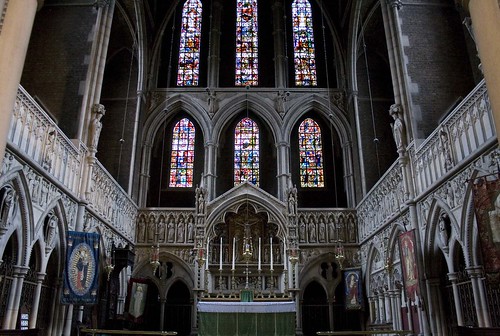 This may be a an ordinary church in religious classifications, but it is most certainly a cathedral to architecture.

Well worth a visit if you are in the area – or even a special trip. The church is open to the public apart from services on Saturday and Tuesday mornings. It is a couple of minutes walk from Kilburn Park tube station on the Bakerloo Line.

This coming Saturday (1st Dec), there will be a church fayre from 11am to 3pm if you want to see the building full of life. 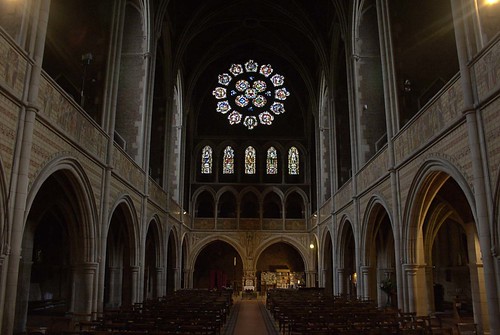 Some more photos taken this morning over here.