It can scarce have escaped your notice that the Soviets have invaded London. Less keeping calm and carrying on though, than get excited and rush over to the Science Museum.

Their latest blockbuster exhibition will be an eye-opener to westerners, and many Russians, as most of the objects have never been seen outside the motherland, and rarely enough there either.

It took years of negotiation for most of the objects to be permitted to leave Russia at all, followed by a week in a ship to get to the UK, and even then some of them were almost too big to fit into the museum.

The exhibition though starts with smaller objects and greater imagination as humans dreamed of reaching the stars and how that might be possible.

The display reaches the space age though with the famous beeps of Sputnik 1, which heralded the moment that mankind reached beyond the atmosphere for the first time. Sparking in mankind a mix of awesome excitement and terror as the red enemy demonstrated superiority over Western democracies for the first time. 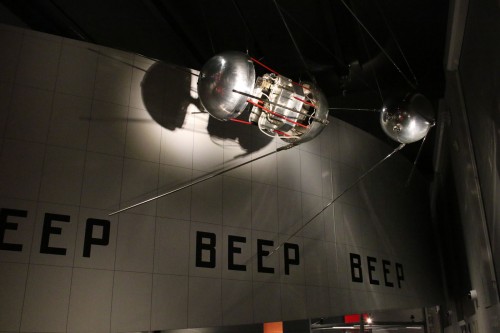 In the fevered period of the cold war, this was also a spark that launched the space race, and while the politicians put men in space, and on the moon, humanity gained far more in the form of satellite television and telephony.

In our modern age of instant communications it is difficult to remember the sheer excitement as the space race lifted an industrial society into the technology age where almost anything seemed possible.

As the exhibition shows though, they were still in the embryonic stage of that development. It might have been the white heat of technology, but the computers were still rudimentary and often very physical in nature.

The charred balls that carried humans (male and female) into space being oversized walnuts that seemed diminutive to the message they carried. Barely big enough to carry their heavy equipment with a human as mere passenger for the propaganda. 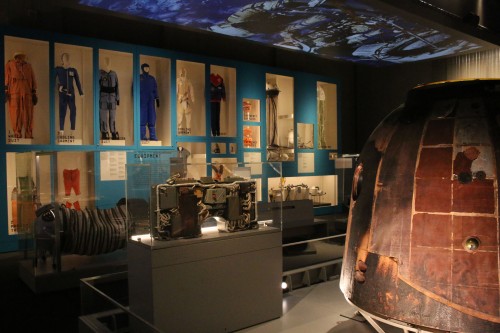 The star of the space race, and this exhibition though was the moon race, and it wasn’t until 1989 that the world learnt how close the Soviets came to beating the USA to the moon. Only a series of rocket failures delayed their mission long enough to let America claim the prize and the glory.

The Russian lunar lander is the largest object on display here, alongside a lunar rover, two of which did make it to the moon. Slightly hidden around one side is the folded up steps that would have carried a human onto the moon’s surface. 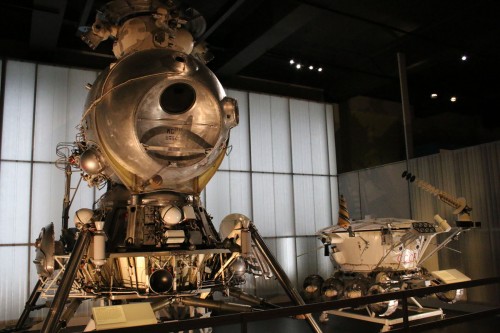 How different would public imagination be today if those first words were uttered not in English, but in Russian?

That is however also the bit that’s missing from this exhibition — imagination. It’s a great display of objects, and small signs explaining the objects. But the imagination is missing. The excitement of the space race that had people avidly glued to TV sets to watch grainy footage of mankind’s tentative steps into the unknown.

There was a genuine unknown going on. As Donald Rumsfeld said, a known unknown, and plenty of unknown unknowns. In fact, the quote comes from NASA, he was only repeating it. 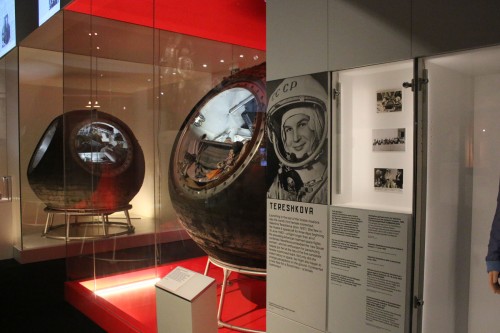 The exhibition is clinical in how it displays the objects, as museum pieces are wont to be in a museum. And I usually like that. However, this time, it needed a bit of the magic, the excitement, the 1960s.

The past is a strange land, but here we don’t feel disoriented by that unfamiliar landscape. It’s a display of the old and the odd, but that is all.

But if anything is to remind us of the peculiarities of life in space, seek out the toilet, with its very evident gender specific attachment. 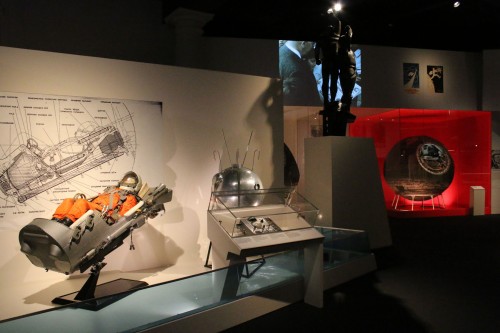 Today, the UK is one of the world’s leading developers of space technology, but we humans will always be more excited by the thought of humans being sent into space. In that sense, the USA and Russia have all the glory, and the rockets, and the heritage. 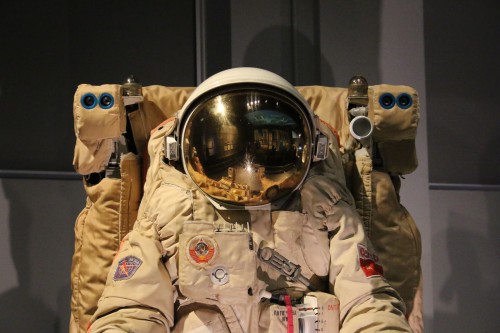 This exhibition is a rare chance to see any of that heritage, and as it is from the Russian side, probably one of those rare moments where the saying “once in a lifetime opportunity” is accurate.

The display finishes with one of the earliest objects, a model of Yuri Gagarin with sensors installed, which was launched into space to test how a human might cope. It’s both old, yet set alone in a futuristic room, as if a future spaceman is resting in cryogenic suspension as they travel between the stars.

We live in an age that is too late to discover any new lands on Earth, but we are too early to fully leave the planet to explore the Solar system.

Maybe this exhibition will motivate the next generation of astronauts, cosmonauts, or taikonauts. And mankind can reach for the stars once more. 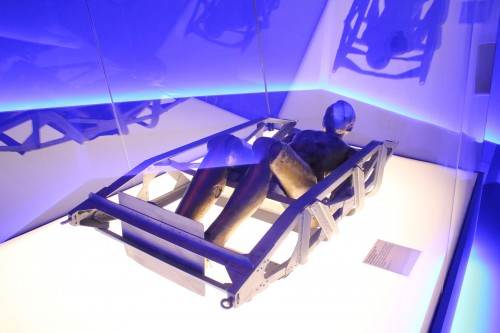 The exhibition, Cosmonauts: Birth of the Space Age is open daily until 13th March 2016.