The remains of a strange tunnel near the Embankment

If you wander around the back streets of the posher bits of grand buildings along the Embankment, you might spy an old looking tunnel entrance under some buildings. You might, not unreasonably presume that it is a subterranean car park entrance — but you’d be only partially correct, for this is a curious little road tunnel that is surprisingly useful.

The road is a remnant, a left over from the construction and later demolition of the mighty Adelphi terrace next to the Thames. The row of neo-classical buildings were level with The Strand, and built up upon an undercroft of arches and warehouses facing the river. 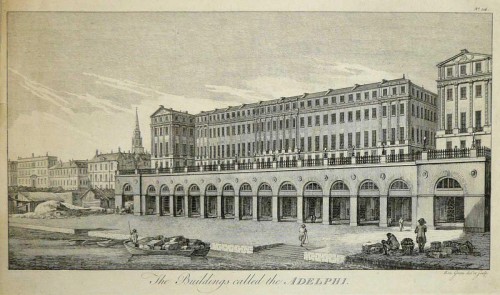 At the time of construction, a road was built under the buildings, known as the Subterranean Way leading to Lower Robert Street to convey carriages and carts into the undercrofts and riverside warehouses.

The river frontage was however lost when the Embankment was constructed, and as a result, the arches swiftly became notorious for activities as down market as the occupants in the grand houses above were noble.

Mr. Timbs in the Curiosities of London (1855) remarks that “the most abandoned characters used to lurk; outcasts and vagrants came there to sleep; and many a streetthief escaped from his pursuers in those subterranean haunts, before the introduction of gas-lights and a vigilant police. Even now tramps prowl in a ghastly manner down the dim-lit passages.”

An article in The National Magazine in 1857 describes the nighttime residents as having “quaffed the cup of suffering to its dregs”, which is poetic, if despairing to think about.

In fact, there were several articles around then by the gentlemanly press describing life in the arches, but more as tourist curiosity that should appeal to bold hearted folk, rather than as a disgrace to be solved.

In the early 1930s though, the grand houses and less grand warehouses were replaced with the current Art-Deco style building — but they kept Lower Robert Street open as it was frankly, a very useful little cut through for taxis, and those who know about it.

A short brick tunnel sitting between two more modern lengths of road it has a curious charm in its brief winding route under the buildings above.

As I stood in the tunnel taking a photograph on the very narrow cobbled pavement, an expensive looking car passed by. The more common sight being taxis who know about this little short-cut, and who smiled to see me standing in a corner with a camera.

A less common sight is the ghost of a prostitute who is is claimed to have been murdered by a customer.

Once down the short winding remnant of the old arches, you are into a modern square cut roadway that leads to an underground car park — and down towards the Embankment for the motorist.

The exit is rather less curious than the entrance, but fits the façade that now run along the road.

It’s all locked up over night though — possibly to deter a return to is antique usage by the homeless and prostitutes.

The local pedestrian staircase and the gardens are closed more often, so the road is a useful escape from a pedestrian dead-end, as I informed three lost souls who wandered around looking for a way out.

You can however find your way in by heading to York Buildings, which is despite its name, not a collection of buildings, but a road — and you can see the tunnel on this map. If you choose to explore it, be sensible and stick close to the sides — as motorists are not used to pedestrians being down there.