There is a very small part of North London that has a railway station named after it, and that festive area is called Turkey Street.

Now, as it happens, it’s not a turkey as we understand it today, but more of that later.

The railway station is a recent addition to TfL’s growing collection of overground lines, but has had a rather chequered history. 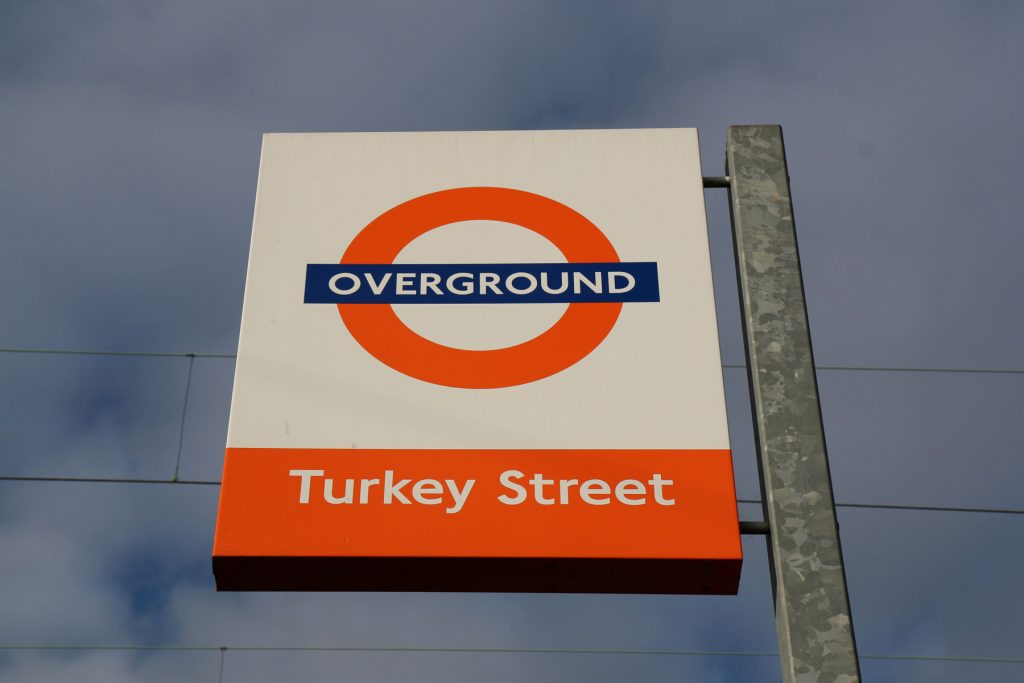 Opened in 1891 on a new railway line running from Edmonton to Cheshunt, it saw increasing competition from the arrival of the trams, and passenger services ceased less than 20 years after it opened, although freight continued to use the line.

The station itself was was originally called Forty Hill, after the nearby mansion of the same name, and had a small brick station masters house and ticket office, with stairs leading up to the platforms.

The railway runs over the Turkey Brook and when originally opened, the name of the station, Forty Hall was painted onto the railway bridge running across the road. 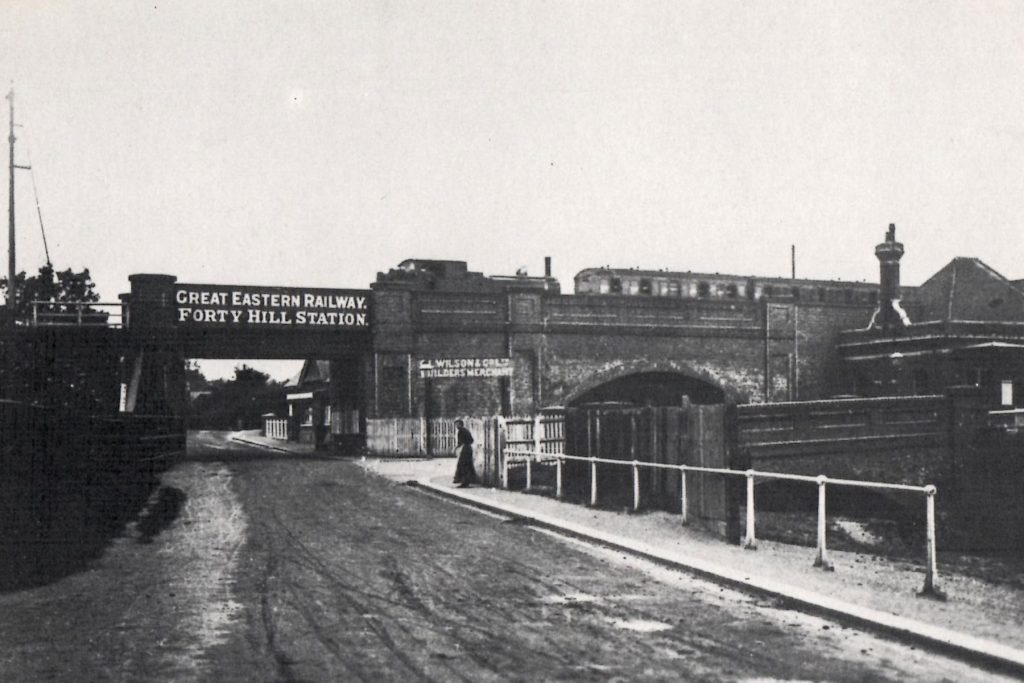 However, the station closed in 1909 and, apart from a short burst of use during WW1 for local munitions factories, it was left to run down until passenger services returned in 1960.

In the 1980’s, the old station master house was removed, and a rather uninspiring steel canopy was installed. The old ticket hall was on the other side of the tracks, and that is now a shop, so the ticket office was swapped around. Last May, the service was taken over by London Overground, and at the moment, they are busy rebuilding the site for a new canopy for commuters. 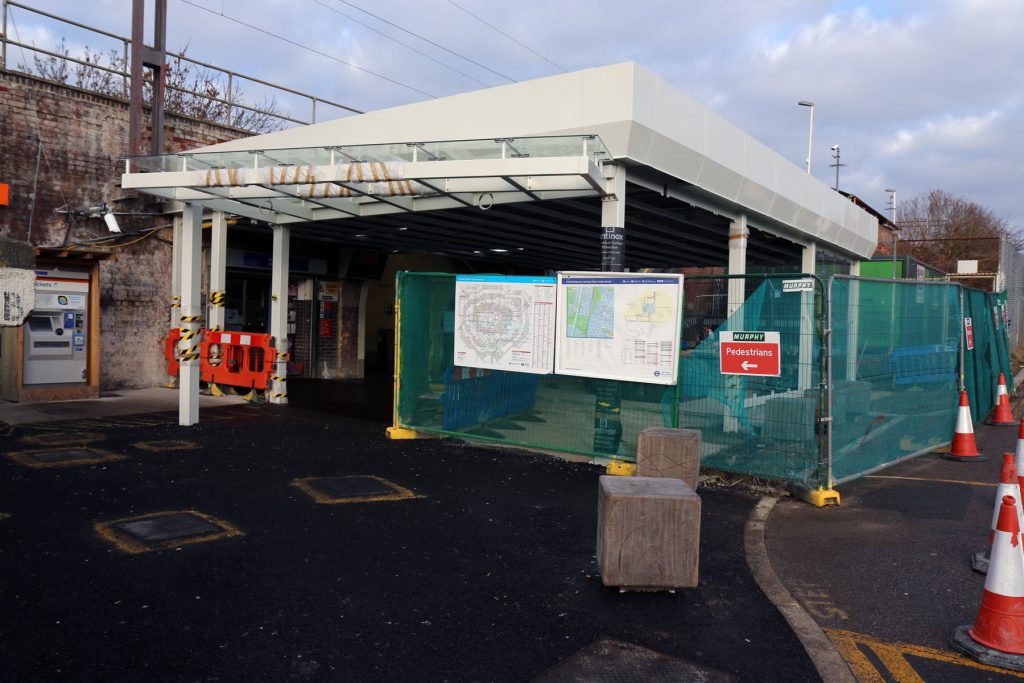 Up at the platform level, it’s a bland, rather windswept two platforms with little of note to recommend it. 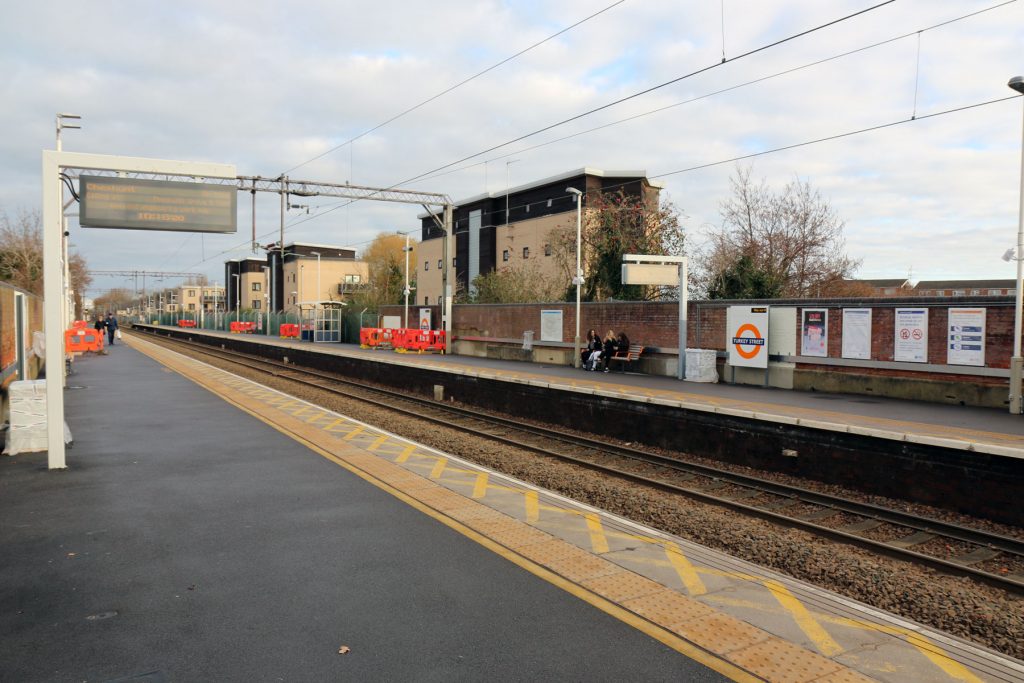 I suspect that on very wet days, commuters may be huddled in the tunnel that runs underneath the railway line and links up the two platforms.

What is charming though are a series of wooden blocks outside the station, which have the look of having been decorated by school children and have drawings, and memories of the area carved into them. 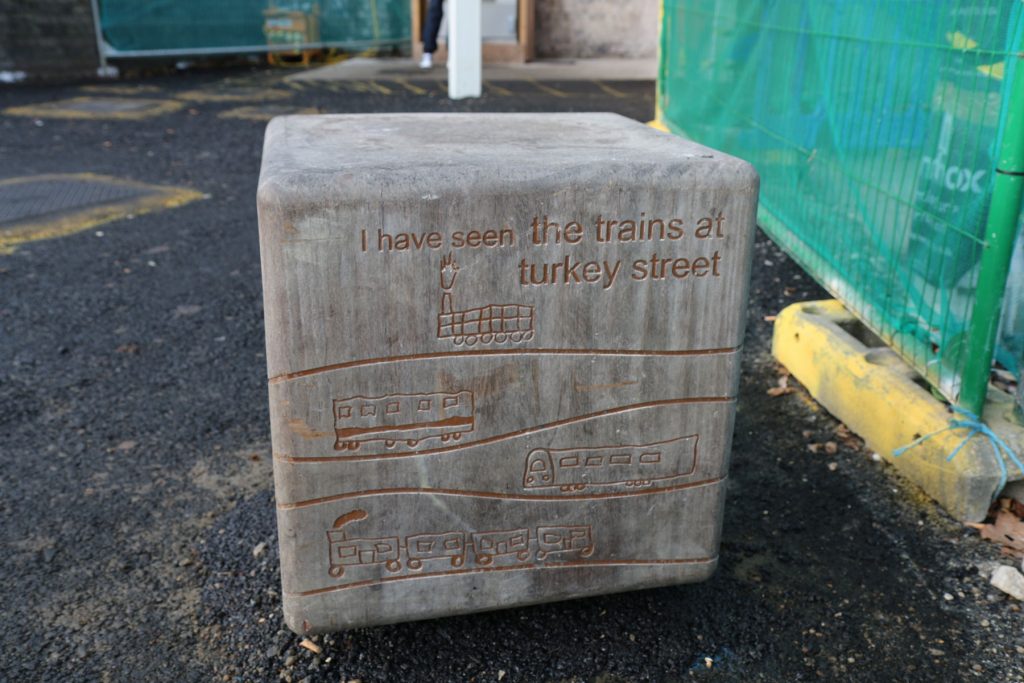 The name of the station though is what probably stands out in this festive season, and why is it called Turkey Street?

Well, it’s sadly nothing to do with the bird, but probably, as in most English names, a slow corruption over the years from something else.

The original name may have been ‘Tuckey Street’, as a John Tuckey held land here in the reign of Richard II . In 1695, however, the name was shown in Camden’s Britannia as ‘Tuttle Street’

It was back as Tuckey Street on Cary’s Map of Middlesex (1789), while the OS map of 1890 referred to the whole area as Turkey Street.

So, nothing to do with Christmas Lunch, but curiously, the turkey bird is also not really a specific type of bird. Or at least, it never used to be.

The original turkey bird was probably a type of guineafowl being imported into Europe by turkish traders. As it was an exotic bird, it gained the name of a turkey bird, and all exotic birds were called turkeys.

When the American turkey was discovered by Europeans, it’s thought that as it was also rather exotic looking, it should also be a Turkish bird.

To Brits, all edible exotic birds were Turkish, and while we tend today to eat one specific type of bird called a Turkey, for a while, anything fancy would do.

And to conclude, within the Turkey Street political ward, the area contained 1,200 people who spoke Turkish.

Which is most apt for an area that has nothing whatsoever to do with Turkey.