The Queen’s “crystal diamond” arrives at the Tower of London

Published 2 May 2012 by By Ian Mansfield Events and Tours

Yesterday evening, just after the last of the tourists were removed (well, almost all of them), a marching band entered the Tower of London, and the Pageantmaster of the Queen’s Diamond Jubilee Beacons, escorted by Yeomen carried a “crystal diamond” to be presented to the Constable of the Tower for safe keeping.

A marching band through the Tower is always photogenic, and a rather lot of professional photographers turned up with noticeably better cameras than mine to record the event. I felt like I had turned up to a formal dinner, in a lounge suit.

As the Tower was still clearing visitors out, there was quite a crowd around the main gate clogging the area up. Then the marching band, made up of Sea Cadets started playing music around the corner so most of the crowd rushed off to see what was going on. Clever crowd control!

After a while though, they progressed down towards the main gate – which was then shut in their face until they asked permission to enter (very much as happened at the Ceremony of the Constables Dues).

Having been granted entry, they passed through the main gate — just after a cleaner had got out of the way, much to the relief of everyone — and progressed past Traitors Gate and around the White Tower to the Jewel House where the Crown Jewels are stored.

A few late leaving tourists got an unexpected surprise. 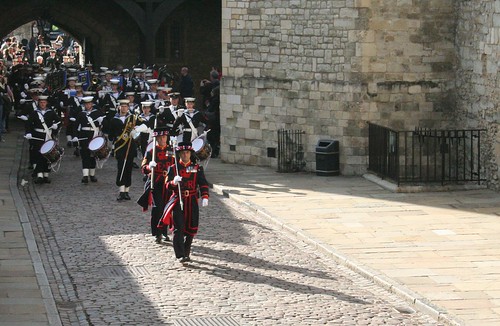 The parade included the 60 members of the Sea Cadets, a number of officers at the rear, and in the middle, escorted by Yeoman, was the Pageantmaster of the Queen’s Diamond Jubilee Beacons, who carried the Crystal Diamond on a purple cushion. 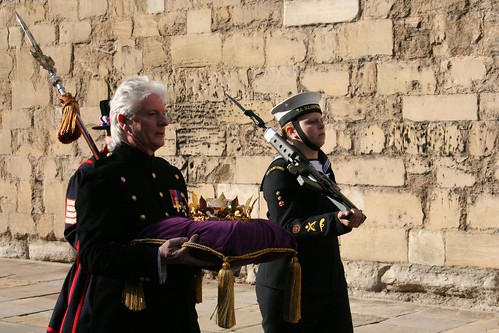 Another crowd was by the Tower though, mainly it seemed made up of families of the Sea Cadets. Having your son/daughter in the services does include the occasional treat of being allowed into venues like this for ceremonies. 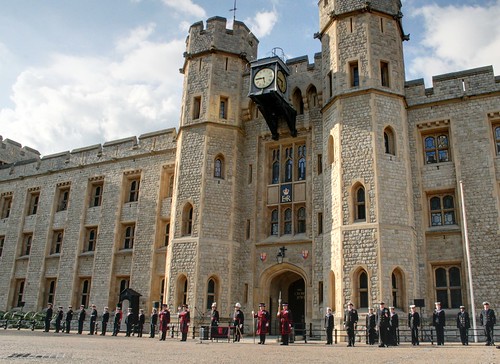 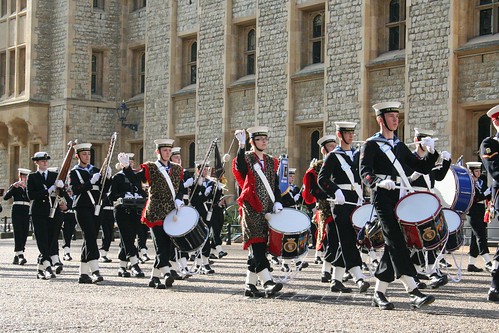 With the courtyard cleared it was also a chance to get some poses with the Pageantmaster and a couple of Yeomen (Beefeaters). 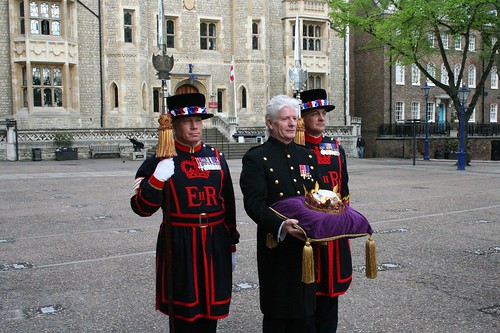 The crystal diamond — actually, it’s a large lump of crystal glass surrounded by a 22 carat gold crown — will be on display for the next few weeks inside the White Tower. It will then be taken to Buckingham Palace on 4th June. Later that night The Queen will use it to trigger the lighting of the National Beacon on the Mall, London, at about 10.30pm. 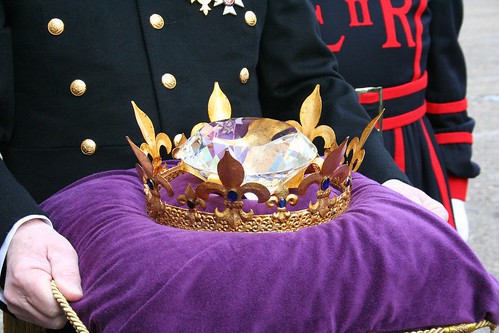 Incidentally, leaving the Tower gave me a rare chance to take a few photos of the Tower devoid of people. Something I only realised on the way out. Will try to remember if/when I am back there after hours again. 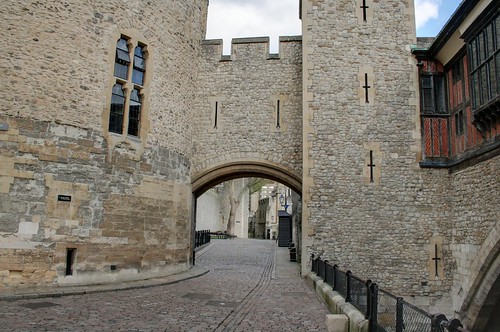 Usual thanks to the Tower staff for facilitating access, and the participants for putting on a show.