The Queen’s Chapel of the Savoy

There is a rather nice looking old church just off Strand in central London that I have often passed close to at weekends and wanted to pop in for a look around – but it is only open for a few hours each day during the week.

The chapel building is the last surviving building of a hospital founded by Henry VII for homeless people in 1512, but it is now more notable for being one of the few churches that are known as a Royal Peculiar, and are under the direct control of The Queen.

There are just 11 such churches in the UK that fall under the Monarch’s direct jurisdiction – including Westminster Abbey.

The site’s history can be traced back as far as at least as 1246, when the land was gifted to Count Peter of Savoy and although the land passed back to the Monarch when the Count died, it has retained his name ever since.

Incidentally, the rent for the land was “three barbed arrows for all services” to be paid annually to the Exchequer.

In the mid 14th century, a Royal Palace was built on the site, but that was destroyed shortly afterwards by the Peasants Revolt of 1381. Despite its seemingly convenient location between Westminster and The City, it remained a ruined site until 1512. This could be partly due to the state of The Strand, which my copy of Old and New London, notes was a very poor quality road at the time.

In 1512, Henry VII built his hospital for 100 “pour and nedie men”, and his son finally got round to improving the roads in the area – but not until he had been on the throne for 35 years. Despite its Royal links, the hospital was never a rich one and was dissolved in 1702.

After a short time when the site served as a parish church, most of the site was cleared in the 19th century for redevelopment – specifically the Savoy Hotel and Waterloo Bridge. All that was left was the Chapel and the graveyard, and the Chapel itself had suffered considerable damage from a fire in 1864.

What I wanted to see when I popped in on Friday was hinted at by a sign outside the Chapel – and that is the incredible ceiling. Although structurally it dates from after the fire, the design, in a bold blue with gold decoration is based on the early Tudor design. 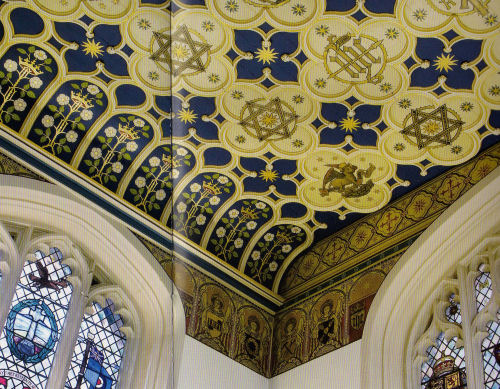 Ceiling detail of the Chapel

Photos in the Chapel are not permitted, so the above photo is taken from a handy guidebook they sell there.

It’s quite a small Chapel, and unusually aligned North/South instead of the usual East/West, with some lovely stained glass windows. At the rear is a very impressive looking organ that takes up most of the width of the building.

Certainly worth popping in for a look if you are in the area and it is open. 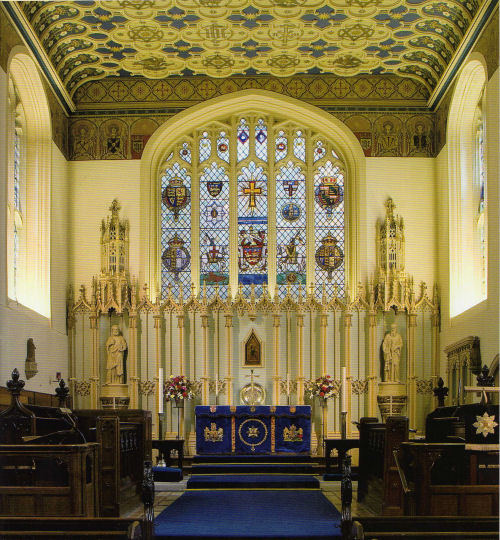 1 Pings/Trackbacks for "The Queen’s Chapel of the Savoy"