You should be informed that by Grace of God etc., our beloved Sovereign Lord, the Queen has issued Letters Patent that issue a new Commission of Lieutenancy for the City of London.

What does this all mean? Well, whenever the Queen visits a place in the UK you might notice that she is usually accompanied by someone typically in military uniform and guiding the event.

Although today a largely ceremonial, and unpaid role, the post of Lord Lieutenant was once exceptionally important. The role largely evolved during the reign of King Henry VIII as the Lieutenants took over the local Militia, the precursor of today’s army.

The role has changed over the years, mainly thanks to changes in county borders, and the consolidation of a formal military structure. Today they act as the Monarchs representative in each of the Counties, but still retain a role as a military liaison for the counties as well.

As counties are large, and Lord Lieutenants less so, they typically have around 40 deputies. Greater London has a Lord Lieutenant as well — currently Sir David Brewer CMG JP.

…but of course, the City of London, being well, the ancient beast that it is has a different way of doing things.

As such, while nominally there is a top person and a load of deputies, technically the post of Lord Lieutenant is held by all of them jointly in Commission.

As an aside, the current Lord Lieutenant of Greater London is the former Lord Mayor of the City of London, which puts him in the unusual position of having held the job title twice, once in Commission and once in person.

Quite why the City of London has its Lord Lieutenant held in Commission seems difficult to work out — but it seems to have been so since at least 1617, if not earlier. Certainly the earliest reference is the one in 1617.

It may be that the City was granted the Commission in recognition of its assistance when King James I was struggling with his finances and its efforts in mustering a sizeable Militia during a period of mini-rebellion.

Another likely factor is that King James I was not in a strong position himself, and having a single person in such a politically and militarily powerful position with the full financial weight of the City of London would have been akin to having a shadow monarchy. Dangerous!

At the time, the Commission was made up of just the Lord Mayor and 10 other persons, so fairly manageable. Their job was to manage the City Militia and prepare the City for defense should a foreign invader do some invading, or the locals want to depose the monarch.

The Lord Mayor, aldermen and other officials automatically became members of the Commission, and then the Lord Mayor would nominate a number of outside experts to the Commission to ensure it retained its military expertise.

However, the Commission wasn’t to remain so compact for long, and by 1702, it included 142 people, including all the City’s aldermen, who often doubled up as officers in the Militia.

By 1900 though, the Commission had swelled to an unmanageable 360 people, and finally something was done about it after King Edward VII decided it was all getting a bit out of hand. Although it took time, between 1901 and 1951, only one person was appointed for every three vacancies that might otherwise has arisen.

In addition until 1938, the Lord Mayor, city officials and aldermen once appointed to the Commission effectively held the post for life. Now, the moment a person ceases to hold the City job, they also cease to be a member of the Commission.

There has been a bit of tension over the past 50 years or so about the make-up of the Commission. The automatically appointed members being usually businessmen outnumbering the nominated members who are generally required to have military experience in order to maintain the polite fiction at least that the Lord Lieutenancy is a military position.

The other reason within London for the tension is that the Commission handles the Trophy Tax. This was a levy imposed on city businesses and residents used to fund the militia.

That tax was later used to fund the construction of the imposing barracks headquarters at Finsbury Barracks, now occupied by the Honourable Artillery Company.

The tax is still collected as part of the general taxes raised by the City, and to this day, the Lieutenancy continues to use the Trophy Tax to make grants to the City of London Territorial Army Volunteer Reserve for example for recruiting campaigns, additional training facilities, competitions and charitable work associated with the Reserve. 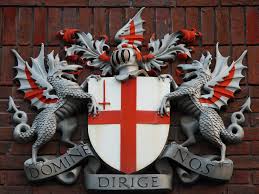 So there you have it — on Christmas Eve, the Queen renewed this City of London tradition. Hopefully they’ll have a cake in 2017, on the 400th anniversary of the creation of the Commission.