From the outside, it doesn’t actually look all that interesting with a fairly bland brick wall dominating the side of the church and from the outside, the windows don’t look anything particularly interesting. What does make the church, dedicated to St Paul stand out though is the huge clock tower that sits proud of the front of the church and has been the lure that has periodically drawn me over from the main road to see if the doors were ever open. 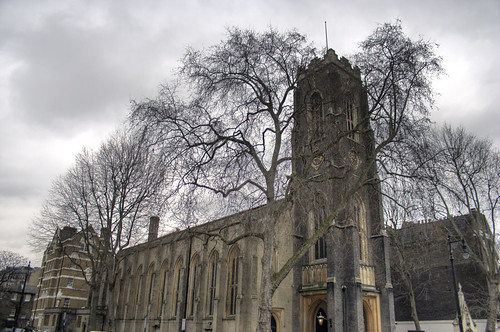 For once, the doors were open, and even better, the internal doors yielded when lightly pushed upon, and what an amazing interior greeted an unexpected visitor.

I wasn’t aware of its history when I visited, but this was the first London church to be designed in the new Oxford Movement, which saw a return to a more ornate gothic design which was a fusion of Anglo-Catholicism.

It has an interior that would not be out of place in a Medieval Palace or one of the City’s great livery halls. 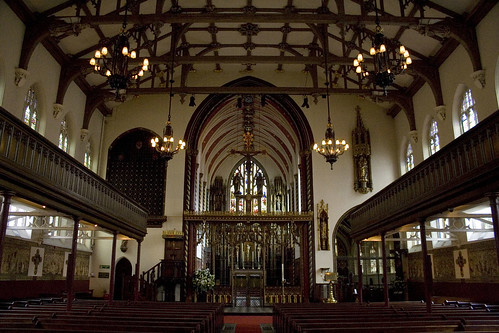 A vast wooden beamed ceiling is punctuated by angels holding up each of the mighty beams, with huge carved corbels lining the ceiling. Sadly the dim lighting while delightful to the eye and soul, was a challenge for the camera – so you will just have to go and visit the place yourself to see those impressive details up close.

Having gasped at the ceiling as you enter, the eye is inevitably drawn down to the highly decorated screen at the far end, and as you step forward, the milky softness of the carpet compels a visitor to step lightly as they approach the altar. 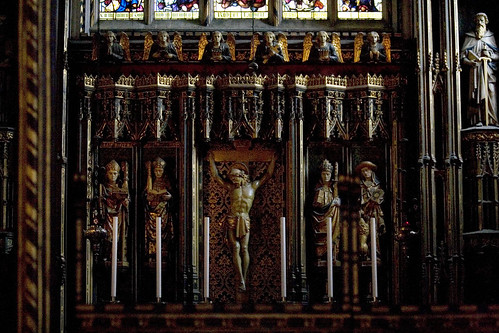 Probably supported by a congregation that is not short of a few pennies, this church boasts a pristine interior with exceptional tiled decorations along the walls depicting the stations of the cross.

Although the windows looked nothing special from the outside, that was simply because the lighting inside the building is set to a very low level. From the inside, the stained glass is astounding. Not just in the completeness, but also in the depth of colour and clarity. 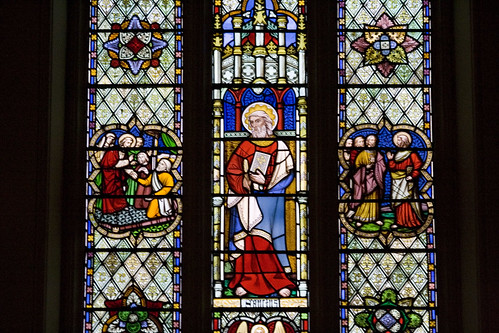 As I entered, I thought alone, it turned out that I was joined by the organist who then filled the church with the deep chest growling sound that only a powerful church organ can generate. Wondrous.

Shortly afterwards joined by a less salubrious sort who entered with a pizza and sat at the back leaking an aroma that would sit ill at ease with the incense more commonly found in such places. Such is Christian charity to allow anyone within – whether worshipper, homeless – or blogger.

The church itself was constructed in the early 1840s, with the consecration in 1843.

A sign outside suggests that the church is open most afternoons I presume I have always been unlucky in the past, or maybe that is a new thing. 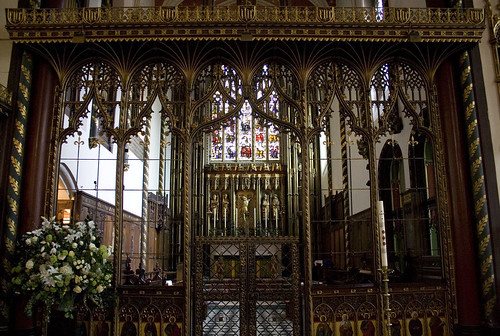 If you like that church, also check out All Saints just off Oxford Street built in a similar style.