A more widespread counterpart to its Italian cousin, the Northern Renaissance swept across northern Europe in the 15th and 16th centuries, affecting art, literature and even politics in a time of Protestant turmoil and the English reformation.

Digging into the voluminous art collection held by The Monarch, the Queen’s Gallery has now laid on a display of works from that period of time focusing on a few select artists, and regions.

A series of galleries leads you around the Renaissance from an early portrait of Erasmus through to the mass-printing works of Dürer, the Dutch influence and of course, Holbein.

Many of the artists of the period, while separated by vast distances would have met at various times as their patrons dragged them around Europe, which in turn lead to regional influences across a wide spectrum of artistic endeavours. 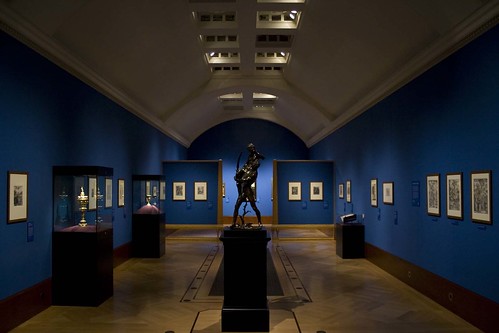 Dürer was probably one of the more commercial artists as he cleverly took full advantage of the printing press to turn single drawings into prints that could be sold repeatedly. Even though paper and printing were still staggeringly expensive, a print was then as now, still a lot cheaper than a commissioned painting.

Apart from some of his prints, the exhibition includes a couple of preparatory drawings which are rare insights into his work.

Do admire the huge processional carriage drawing as well.

At this time, art was the preserve of the rich and powerful, and often used by Monarchs as a tool of propaganda and one-upmanship against other Monarchs. This is particularly evident in one room, which has two vast tapestries ordered by Cardinal Wolsey.

It is also in here that hangs the famous Massacre of the Innocents by Pieter Brueghel the Elder. This transposed the biblical scene to wintry one, and which was later painted over so that animals replaced the children so it was less gruesome.

There is still a debate about whether that later overpainting can be removed, and if so, should it?

Obviously Holbein is here, in another gallery, although he shares the space with portraits by French artists as well. 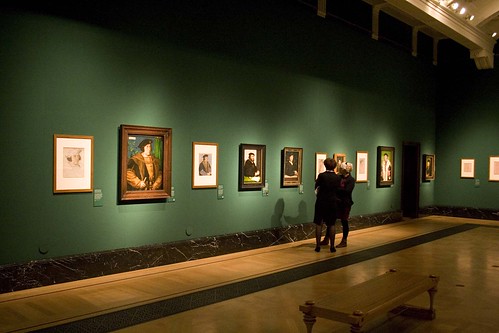 One of the most interesting paintings in here is a mystery as well. Only just restored in time for this exhibition it appears to show a German merchant from the Hanseatic League, probably based in London’s Steelyard. However, despite the restoration, they still cant quite make out the writing on a slip of paper he is holding — which probably includes his name.

Overall, this is a good exhibition of around 100 historic portraits and drawings of a style that have managed to bring together a block of work defined more by the social upheaval of the times than by artistic genre or artist name. 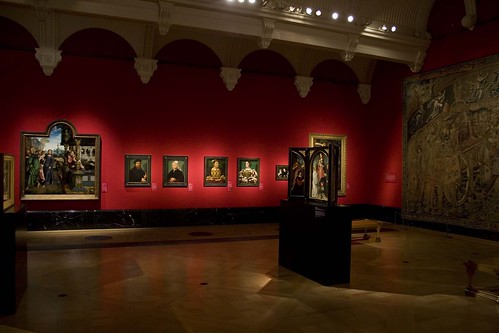 The exhibition opens today and closes next April – so expect to see lots of posters on the Underground of a rather handsome young man staring at you for the next few months.

Tickets cost £9.25 but are valid for re-admission for a year if you get them stamped on the way out, so you can visit their next exhibition (Tudor and Stuart Fashions) in May for free.