The Myth of Wren’s Masterplan for London

I recently had the great pleasure of acquiring a copy of a report commissioned by the City of London in 1944 for ideas about the rebuilding of the City when the war eventually finished. Although very speculative in ideas as you would expect as they didn’t know yet how much damage would occur or how long the war would last, much of the delight for me is the substantial numbers of maps and drawings.

However, the report noting that the City was likely to be badly damaged by bombs, was also aware that this could be the first significant opportunity since the Great Fire of London in 1666 for a wholesale redevelopment of the road and services layout.

The report starts though with a serious eye-opener, and that was the debunking of the myth that Sir Christopher Wren drew up a master plan for the City following the fire, and that local people and businesses simply ignored him and rebuilt their homes/shops as they wanted to. 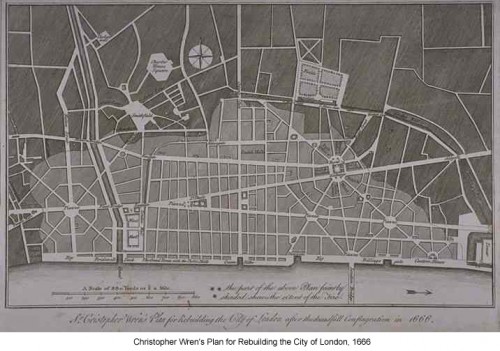 The famous quote from which it is thought that the story first emerged is thus:

“Its ‘Practicability… without Loss to any Man, or Infringement of any Property, was … demonstrated, and all material Objections fully weigh’d and answered. Yet nothing was effected because of ‘the obstinate Adverseness of a great Part of the Citizens to alter their old Properties, and to recede from building their houses again on their old Ground and Foundations; as also the distrust in many, and Unwillingness to give up their Properties , tho’ for a Time only, in to the Hands of publick Trustees, or Commissioner, til they might be dispens’d to them again, with more Advantage to themselves, than otherwise was possible to be effected”

Sounds fairly convincing – a grand plan drawn up, and rude uncommon folk simply refused to go along with it and ignored the pleas and protestations of the wiser folk to allow planned rebuilding to take place. As is often cited, the city is full of narrow streets rather than grand thoroughfares and is routinely criticised for the impediment to trade this causes.

Personally, I quite like the narrow streets, but can appreciate that their appeal is somewhat diminished if you are a delivery van trying to carry out your trade.

However, is the claim actually correct?

According to this report, although Wren’s plan was discussed in meetings, it was but one of many such plans and not a single one of them was approved.

Although a plan by the City’s own surveyor was approved by the City of London, it was rejected by Parliament, and a stalemate occurred. Notable though – at no time was Wren’s plan ever accepted by any body or organisation!

So, why do we think Wren’s plan was approved, but subsequently ignored?

Wren’s reputation was actually quite poor at the time of his death, with his Baroque style coming under fire from later architects who were looking back to the classical style promoted by Inigo Jones.

It is thought, although not proven, that the story of the master plan started with Wren’s son who wrote a rather flattering eulogy to his father which tended to rather whitewash the truth at best and told outright lies at worst – and certainly painted his dad in a more flattering light than would have been conventional at the time.

His book painted Wren as a visionary who was defeated by unenlightened self-interest by the tradesmen of the time.

It was only much later that Wren’s reputation was repaired, and it was largely through the slow transformation of St Paul’s Cathedral from a somewhat despised building that looked just a bit too Catholic for Protestant tastes into a triumphant center for National Celebrations.

So what actually happened in the aftermath of the Fire and why didn’t a Great Plan ever emerge?

At the time of the fire, it has to be remembered that England was not only at War with the Dutch Republic, but that it was still recovering from the devastating effects of the Plague. The City had limited funds to pay for the massive land purchases that any Grand Plan would have called for, and the Parliament was desperate to restart commerce as soon as possible so that it could collect taxes to pay for the ongoing war.

Given the dire financial situation, the City did what it could with very limited funds and by the standards of the time, had a huge impact on the rebuilding works. Although the buildings were largely rebuilt on the same spots as before, there was a determined effort to widen all the streets of London – and it may surprise you to learn, this was a success.

Yes! The narrow winding streets of London today were an improvement on what went before!

Prior to the fire, most streets were actually just alleys and pathways barely wide enough for a hand pushed cart to navigate, let along anything larger. When the City Commissioners granted rebuilding permissions, they used some of their funds to buy up narrow strips of land along each alley and convert them into proper streets.

Planning permissions were also used to force owners to create proper frontages on buildings that faced these new streets so that they couldn’t later “leak over” the pavements and undo the efforts to create these streets.

So, while no Grand Scheme was ever adapted, the City was greatly improved by the creation of a host of streets where none had existed before.

Some may bemoan the failure of a Grand Plan, although I am less convinced as grandiose designs inevitably fail due to their inability to predict how a future might use the City. I also quite like the more organic flow of the City as it is today. However, the oft-cited lament that the City should have been a grand Parisian style City with wide boulevards is just a myth. A myth borne out of the desire of a son to rehabilitate his father’s reputation in defiance of the facts.

Time to kill off the myth?