The missing murmurations of Leicester Square

Some thirty years ago, visitors to the cinemas of Leicester Square were warned to carry a copy of the Evening Standard with them — as protection.

Not from aggressive newspaper sellers, but from aerial bombardment from around 100,000 starlings who had taken to nesting in the trees and building alcoves of that green square, and birds being birds, hadn’t been potty trained.

A regular rain of little white droppings descended upon the heads of film fans, who had taken to carrying a copy of the London newspaper over their heads as protection.

But now, visit the square, and the murmuration of the starlings has long since gone, shuffled off to the coils of myth and ancient memory.

For while the starling is widespread in Europe, as with many birds in the UK, it has seen its local population plummet.

London’s film fans might be forgiven for blessing the end of the nightly bombardment, the vast flocks of chattering birds sweeping over the countryside as they seek a roost for the night is one of nature’s great marvels, even if one to observe from the side as opposed to underneath it. 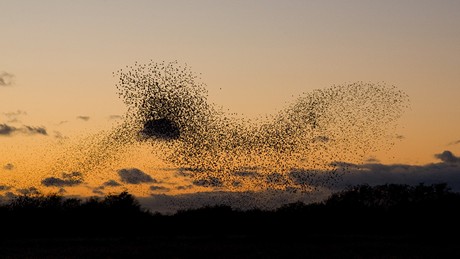 The starling as a London bird was, however, a fairly short-lived affair with the city.

The birds started to appear en-mass in the city around the end of the 19th century, and there was for a while a lengthy correspondence in the Times in 1894 about their arrival in St James Park.

One fan of the birds, a Digby Pigott noted in a letter that the sight of so many birds in the park in the evening was a delight — even if he then commented that firing a gun at them brought down a dozen birds so closely packed were they.

His gunshot couldn’t have been that effective though, as starlings were still massing in the park some 35 years later, where Duck Island was seen to be their preferred roosting location. in the park, although not in winter, when they seemed to prefer buildings — possibly for the warmth.

A Mr Wilson in 1931 commented that most of the Starlings passing over London were flying between rural feeding grounds, and the birds roosting overnight in the city were the older ones who couldn’t make the 15-20 mile flight in one day, and that the numbers were growing as London expanded and pushed the boundaries of rural England ever further away.

The British Museum was less charitable, bemoaning the cost of cleaning their facade after the starlings took a fancy to it during WW1 for some reason, and were not successfully evicted until the 1930s.

A study by Mr E M Nicholson in the 1940s found that the starlings had an odd preference for roosting amongst the stone acanthus leaves of Corinthian columns that decorate the exterior of so many classical buildings. Maybe that’s why the Starlings left the British Museum — its frontage is lined with Ionic Columns.

Of course, the starlings gained notoriety when in August 1949 a flock of them decided to rest on the minute hand of Big Ben causing it to lose 5 minutes as the clock mechanism couldn’t overcome the weight of the birds.

By the 1950s, the sight of vast clouds of starlings swooping around central London was a common sight — mostly at winter, although that was mainly due to nightfall occurring at the same time as commuters headed home. The birds just waited until later in the evening during summer, when there were fewer office workers around to notice.

However, by the 1980s, the starling was starting to be seen more as a nuisance than a delightful sight. Cars parked under trees could be pebble-dashed in a single night. People wandering through parks could swiftly come to rue the decision.

And then it all stopped.

Between the 1980s and 2000, the starling population of London collapsed. Utterly.

A decade ago I moved to a flat in docklands, and when I put out bird feed, hardly a starling was to be seen. When I moved away, there was an undeniable flock swooping up to grab food and chatter animatedly between themselves on the balcony.

They left a mess, which was easy to clean up with the mop, and significantly easier to clean than that left by the feral pigeon.

Today we bemoan the presence of that avian chav, the pigeon, which was barely known in London at the start of the 19th century and has since taken to the city with gusto, as it has in many cities.

Curiously, the pigeon population is not that large — it’s just far more noticeable as the birds tend to hang around where lazy humans discard food, and their physically larger size makes them easier to spot.

As the newly elected Mayor of London, one of Ken Livingstone’s early acts was to ban feeding pigeons in Trafalgar Square.

The nightly downpour from starlings was once decried, but I think I would prefer their nightly chatter over the sight of fat pigeons fighting over a discarded chicken in a box.