At precisely 6:52 in the evening on the 19th January, 1917, one of the largest explosions in the UK took place – in Silvertown, East London. The explosion killed 73 people, injured 328 more and left around 600 people with cuts and bruises as well as causing considerable damage to local buildings.

The blast took place at a munitions factory that was busy manufacturing explosives for soldiers fighting WW1 in France, and the sound of the explosion was recorded as far as 100 miles away.

Although not the absolute largest in the UK, it was fairly high up the scale and certainly the largest in London. It was also not entirely unexpected – as the factory had been forced into purifying TNT, a process more dangerous than manufacture itself and not the sort of thing you would ordinarily do in what was at the time a residential area.

Earlier in that that fateful evening, a fire broke out in the factory, and while it was being put out, somehow it reached the TNT store, with an inevitable reaction.

The blast was so great that hot material was flung as far away as North Greenwich, where one piece of debris hit a gasometer and caused that to also explode – sending a massive fireball into the sky. A boiler from inside the factory and weighing a reputed 15 tons was thrown out of the building and landed on the nearby road.

According to a report in the New York Times, an American dining in the Savoy Hotel said that the explosion blew out the windows in the hotel, which is evidently, miles from the site of the factory.

In addition, some 17 acres of warehouses in the area were destroyed by fires started from the falling debris. Nearly 1,000 homes were rendered uninhabitable by the explosion, with somewhere around 60,000 were damaged in some way.

Probably worth dwelling on that last number a bit – Sixty Thousand homes were damaged by the explosion. It was that big.

A contemporary report from the Stratford Express newspaper described the scene as if “some vast volcanic eruption had burst out  in the locality in question. The whole heavens were lit in awful splendour. A fiery glow seemed to have come over the dark and miserable January evening, and objects which a few minutes before had been blotted out in the intense darkness were silhouetted against the sky.”

“The awful illumination lasted in its eerie glory only a few seconds. Gradually it died away, but down by the river roared a huge column of flame, which told thousands that the explosion had been followed by fire and havoc, the like of which has never been known in these parts.”

The government mobilised a small army of emergency services to the area, although the local fire station was almost totally obliterated in the explosion, which lead to some delays in fighting the subsequent fire.

Over the next few months as suddenly homeless people were looked after in local churches and community halls, they laboured to rebuild the destroyed homes.

The investigation into the cause of the explosion — which was blamed in part on the factory, and part the government — wasn’t published until the 1950s.

The site of the factory has never been built upon and the area is now a car park. There is however a stone memorial near to the site, sitting rather neglected underneath the DLR railway viaduct (map link). 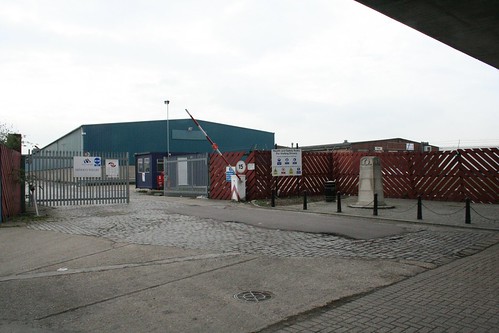 A sign next to it on the fence explains the history of the explosion, which helped with this blog post. 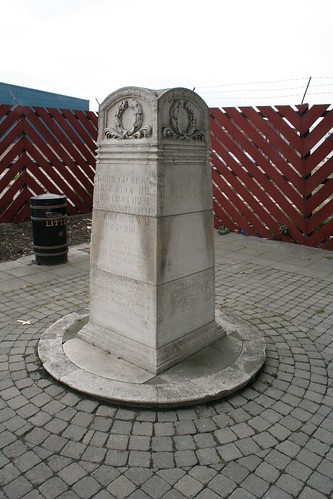 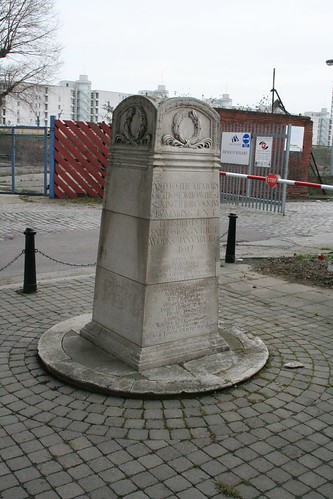 In addition to the memorial near the site, one of the policemen who died was later commemorated in Postman’s Park in central London.