The Mansion, The Military, The Museum – Bentley Priory

Published 27 August 2016 by By Ian Mansfield Events and Tours

Through a locked gate, down a road past more locked gates, and here on the edges of London is a grand building that played a very secretive role during WW2.

Only closed down by the military a few years ago, Bentley Priory is one of those grand houses that the military liked to commandeer during WW2 for their command offices, and here the defence of Britain was commanded. 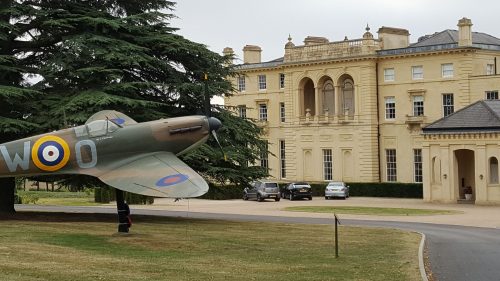 Once you would have required a very high level of security clearance to visit, but today, anyone can, as part of the old mansion is now a museum. It’s not in the most accessible of locations, and the side road is barely advertised at all.

Access is via a security gate, where a guard tells you where to go — not because this is still a secretive military establishment, but because behind that locked gate is a road lined with a number of very expensive houses, each with its own locked gates.

At the far end though, was a cluster of modern blocks, and in the middle, a couple of Spitfire’s on the lawn and the entrance to the grand mansion that gave the area its name.

I may have misinterpreted her reaction, but the lady behind the counter almost seemed surprised that I wanted to visit, and yes, just me, on my own.

I’ve actually been before, when it was a building site, so this was in part to visit the museum, and in part to see how things have changed.

A grand room starts the tour, with a rather nice set up of four office desks, each representing a period in the history of military use, and each with a progressively more modern telephone and typewriter on them. 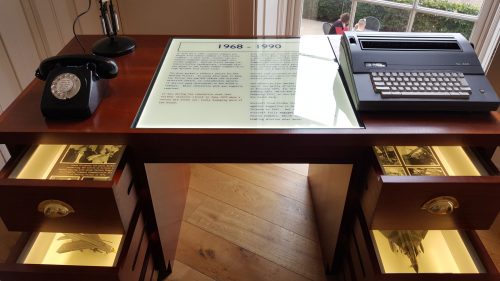 Do notice the contents in the draws, and I was particularly struck by this letter, presumably to be carried by RAF pilots flying over the middle-east. 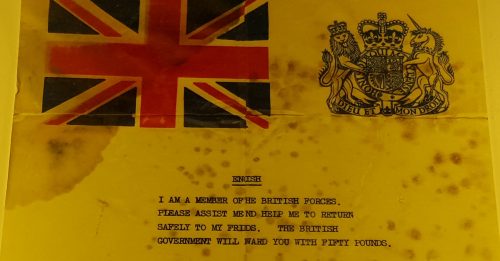 A rather odd looking room for a military museum, but which reflects the mansion’s heritage is the ornately decorated room for Queen Dowager Adelaide. She bought the place a couple of years before moving in, by which time she was too ill to use the stairs and hence some rooms on the ground floor were given over to her.

The most impressive room in the museum though is the John Soane designed round room, once for trophies, now for relics of war. If you are minded to, this is probably the room you will spend most of the visit in, as it is packed full of memories of individuals and their acts of bravery. 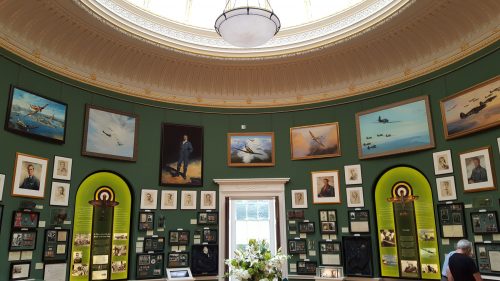 Considering recent politics, it’s also notable that there are many examples of bravery by fighters who came from Poland and Czechoslovakia, and also from around the British Empire to defend the mother country.

The next room is however the reason the military was here, it’s a recreation of part of the mapping room which was once housed in a bunker deep under the gardens. The bunker, once upgraded for the cold war has since been demolished and filled in, but it was here that the defence of Britain from the Luftwaffe was planned. 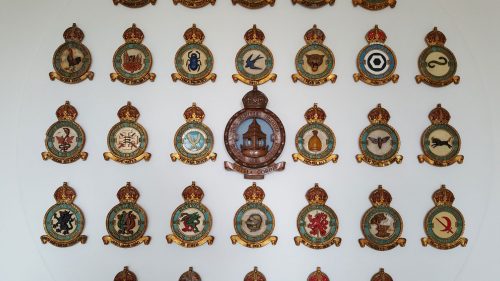 It was here that the intelligence from the observers who watched the skies was collected, where maps were updated, and where planes were ordered to fly.

It was also here that the early use of Radar was put to its fullest extent.

As the rather good documentation along the walls record, contrary to popular belief, the Germans not only knew about radar, but had their own somewhat better version of it.

Not only was their radar superior to the British, but their planes were as well — so how did Britain win?

It was the human element. Here at Bentley Priory, putting information to use in a manner that was totally unheard of in Germany. As the boards note proudly, a visiting American official was astonished at how effectively information was collected and used.

The British air force was also more human than its German counterparts. The British pilots while working 6 days a week, were ordered, yes, ordered, to relax on the 7th day. God rested, and so shall the RAF.

So while the German’s spent their time on the ground sleeping, studying and stressing, the Brits danced, drank and debauched.

The pilots were also taught to work as a team, whereas their German counterparts were more often a cluster of lesser males supporting the Alpha-male pilot. A less effective strategy that ensured that the British human element was able to out perform the German technical superiority. 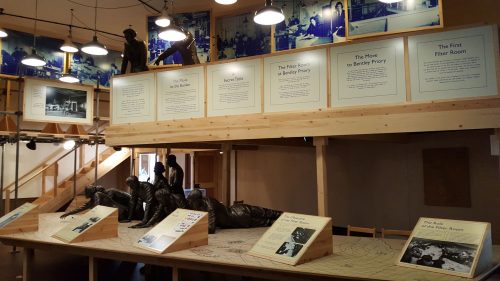 There is a final room which is a bit baffling, in that it is almost entirely empty, as if the museum sort of gave up here. A model of a spitfire cockpit can be sat in, if most of the buttons didn’t seem to do anything. A model of the command room which once sat inside here dominates, but do notice the ceiling. The sky decoration is what was popular when the mansion house was originally built, but look closely and you’ll see WW2 fighter planes in the clouds. 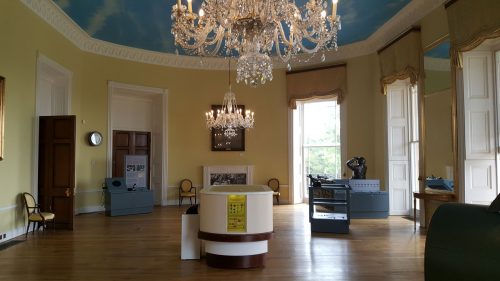 The views of the grounds outside are impressive, and rather curiously, there is the sound of light aircraft from a local airfield regularly flying overhead. It’s almost the sound of spitfires fighting over the fields of England again.

With an entry price of £9, and a location that’s hardly convenient, it’s not entirely surprising that on my visit, the staff outnumbered the visitors. As a museum on its own, it’s a bit of a stretch to recommend, but as a historic location, it’s a vital part of our nation’s heritage and worthy of a visit.

The museum is open Mon, Wed, Fri and Sat from 10am-5pm (closes at 4pm in winter)

It’s also open on Bank Holiday Mondays, and every Sunday in September.

The museum is a short bus ride from either Bushey or Stanmore stations.