Underneath one of Heathrow Airport’s runways, the remains of a so-called Early Iron Age, British dwelling, known figuratively, if inaccurately as Caesar’s Camp.

The flat marshy landscape of pre-airport Heathrow seemed to have had a mound of some sort, as the area where the camp was discovered was known as Shasbury Hill (or Schapsbury Hill on some maps), although hill is probably overdoing what was barely a slight rise in the ground.

Maps aside, the oldest known reference to the mound was in 1586, when William Camden’s Britannia mentioned a “Roman camp; a simple work and not large”.

The name attributed to it could be a derivative of robbers hill, as it was likely to be overgrown, and its mildly elevated location close to the main Bath Road an ideal vantage point to watch for coaches to rob.

At some point it seemed to acquire the nickname of Caesar’s Camp, probably following the romantic principle that anything old was attributed to Caesar. Hence the vast number of Caesar camps, wells, holes, etc dotted across the UK.

This particular “Caesar’s Camp” was first examined properly by the pioneering archeologist, William Stukeley in 1723, when he described it as “nearly perfect and sixty paces square”.

Later descriptions confirm that the site was some 300 feet square, with ditch and enclosure. 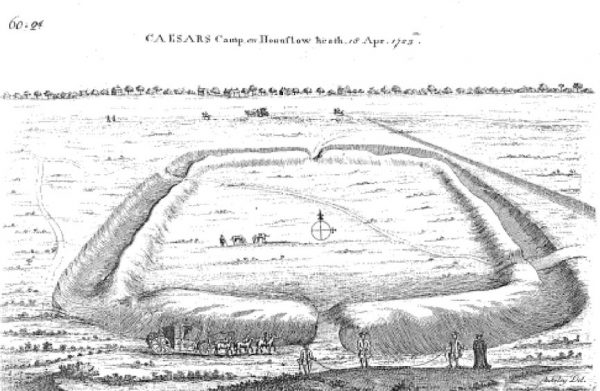 Stukeley’s drawing of the site

Unfortunately, having survived largely untouched as it was on common land, an act of Parliament which saw the parish of Harmondsworth enclosed in 1805 opened it up to ploughing.

Although described as flatted by 1906, it was still showing up on maps, such as this OS map. 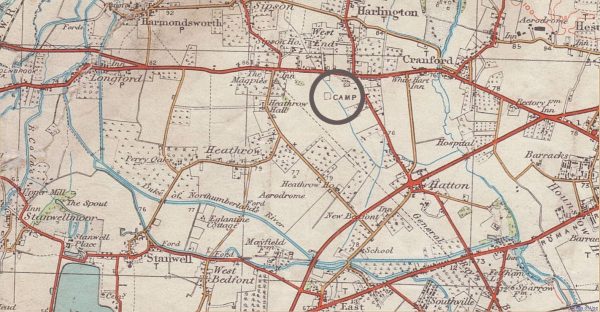 The mysterious mound was however now facing its greatest threat — the rise of Heathrow as an airport, and when the WW2 development of the airport was started, Ceaser’s Camp found itself slap bang in the middle of the northern runway.

This led at last to a systematic study of the camp, although time was short, and thanks to the ongoing war effort, support was limited. W. F. Grimes excavated the rectangular earthwork and found a timber building of a “unique concentric-rectangle plan, together with penannular house gullies;” 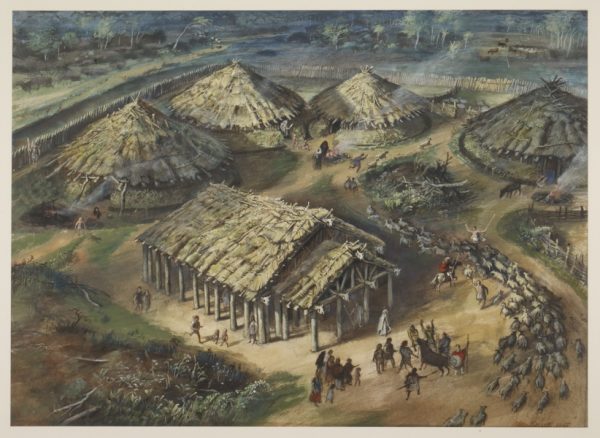 All these features were thought to be part of the same settlement except for two Neolithic pits. Now it can be seen that a Late Bronze Age occupation attested by scattered pottery and small finds but next to no identifiable structures, was followed by eleven Middle Iron Age roundhouses, and one or two features that may be Late Iron Age. 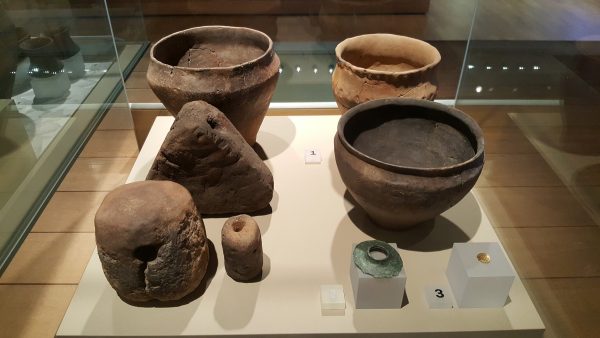 Some of the finds, on display in the Museum of London

Although other Iron Age rectangular buildings are now known, this site’s concentric plan remains unique in Britain and resembles that of some Romano–Celtic temples.

Sadly, it was wiped out of existence when tons of concrete and tarmac was laid on the site, to form the airport’s modern runways.

Overlay of 1920s map on top of modern map

Today, millions of people arrive in the UK each year, their planes first making contact with UK soil inside a “roman” camp.

The Bulletin of the Norfolk Archaeological and Historical Research Group 22

Proceedings of the Prehistoric Society Vol 59