London’s Experiment with a Naked Routemaster

Since the mid 1930s, London’s buses have been like the first Ford motor car, available in one colour, although in London’s case it was Red rather than black.

But there was a chink in the crimson armour in 1961 — a sole interloper emerged as an experiment.

The radical change? No paint at all. Naked. Shorn of its coating. Starkers in fact!

Has the permissive society of the 1960s finally lost its mind?

Its arrival was in fact heralded four years earlier when London Underground tried an experiment with unpainted trains, and London Transport said that they would try out the same idea as well when their new Routemaster buses came into service in 1959.

You see paint costs money, not just in terms of the actual paint applied to the shell of a bus (or train), but it adds weight, and that extra weight adds to the fuel bill.

London Underground estimated that stripping the paint off their trains would reduce operating costs by around £3,800 per train[1] — and that was in 1957 money.

The buses weren’t going to be left out of the fun, so they decided to test one bus. Just the one, to see what the public thought of them. 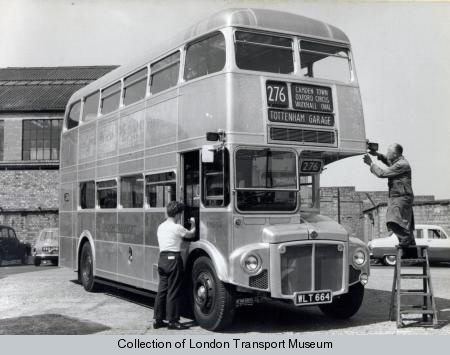 The “White Lady” as the grey aluminium bus was curiously nicknamed ran on Route 276 between Brixton and Tottenham from July 1961, and by that October, just a handful of letters of complaint had been sent in, although a slightly smaller handful arrived praising it.

The Times[4] noted that London Transport officials were surprised at the lack of comment — for or against — as we Londoners are a vocal lot when it comes to matters of transportation.

London Transport’s chief mechanical engineer, Mr Durrant said that an experiment of painting the wings of existing buses red instead of the traditional black for use on Oxford Street had provoked such angry protests that they had to be changed back again.

Although some of the letters bemoaned the plain aluminium appearance as “cheap and tinny”, or “metallic monsters of the road”, the main objection was quite simply, in London, buses are red, only red, and must stay red.

It was maintaining a 30-year old tradition that mattered to most letter writers.

The White Lady was scheduled to carry on trials for another three years. It cost £40 to paint a red bus at the time, but Mr Durrant warned that the grey aluminium might cost more than that — in polish.

The White Lady — officially RM664 — finally got a lick of paint in 1966, but not before Corgi had brought out a special model of the unique bus for collectors[5]. 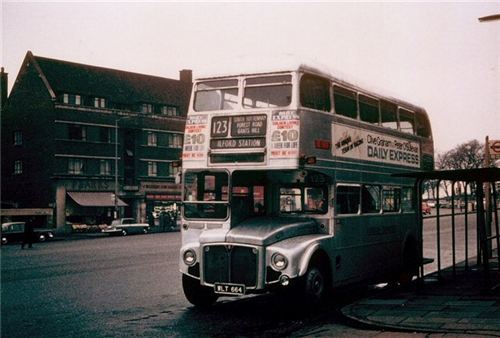 However, and here is the curiosity — a vintage bus collector has bought a different bus, RM557, a bus that I can see in old photos was red[6], but is today recreated in a replica of the White Lady colour scheme[7].

So you might just see a White Lady out and about on the streets of London on occasions. Carrying groups of excited heritage bus fans[8].

[1] Unpainted Coaches On Underground Capital Saving By Use Of Aluminium – The Times, June 13th 1957