The London church named after a French Saint

Just around the corner from St Paul’s can be found one of the City’s older churches, and one that’s unusually named after a French Saint.

The church of St Vedast-alias-Foster is named after St Vedast, Bishop of Arras in northern Gaul around the turn of the 6th century. He was instrumental in the conversion of Clovis, the Frankish king to Christianity, and hence was later to become France.

His name in England has been corrupted from St Vaast, by way of Vastes, Fastes, Faster, Fauster and Forster to Foster, the name of the lane at the front of the church, and the reason that the official designation of the church is St Vedast-alias-Foster.

It’s been suggested that the church may have been founded by the Flemish community in London in the 12th or 13th century. 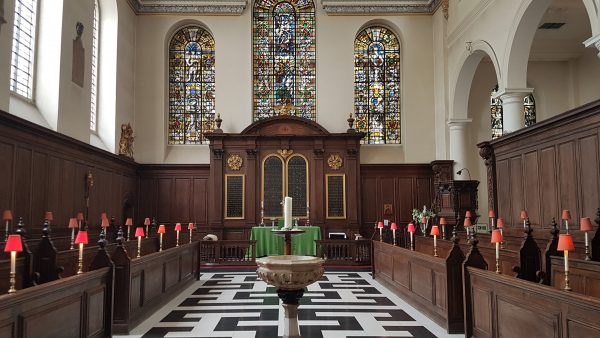 In it’s long life it was nearly destroyed twice, once by the Great Fire of London, and then more recently in the Blitz.

It’s also notable for being the “church of 13 united parishes”, as it absorbed the parish worshipers of other churches that closed down as the City’s population shrank. Astonishingly, one of the thirteen parishes is in the USA, a curiosity of how the church of St Mary Aldermanbury was rebuilt in the USA in 1968. 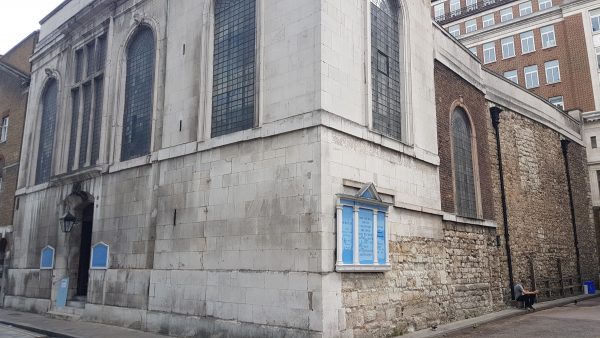 It seems to have been taken over the Puritans during the civil war, as the Rectors’ Board lists the years between 1643 and 1661 as being Foulke Bellers, a ‘Commonwealth Intruder’.

Although damaged by the Great Fire, it wasn’t included in the 50 churches to be rebuilt by Sir Christopher Wren. It later turned out that was optimistic, and maybe Wren was involved in the rebuilding, no one is entirely sure. It’s also possible that Robert Hooke and/or Nicholas Hawksmoor were involved.

The church suffered a second disaster on the 29th December 1940, the famous night that Winston Churchill ordered that nearby St Paul’s Cathedral be saved at all costs. The cost, being the absence of firemen to deal with the incendiary bombs that hit St Vedast-alias-Foster. 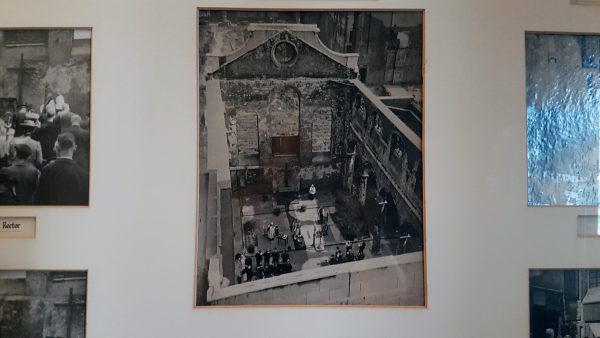 What we see today is the result of post-war restoration, and thanks to how good it is, unless you read the above before visiting, you’d probably not know that the “Georgian” interior is actually from the second Elizabethan age.

This being one of the few churches that are open all week — it does have 13 parishes to look after — on a hot day the doors were wide open and welcoming, even if the church itself was curiously empty.

I’d have thought a cool place to sit and rest on a blazingly hot day would be a blessing. 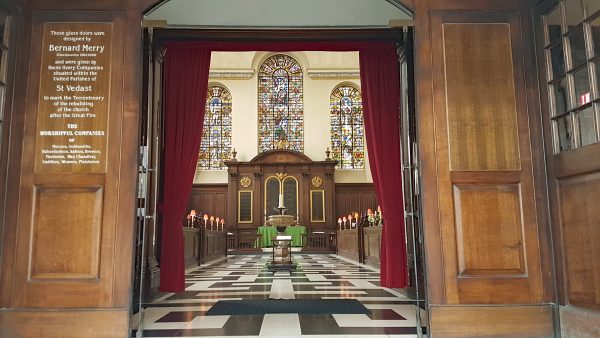 The seating was changed to reflect the smaller congregation, and a wooden wall that runs through the middle splits the church into two rooms. I had initially thought this was for the smaller space to be an old Lady Chapel, but in fact, it’s modern, being added during the WW2 repairs to reflect changing uses. 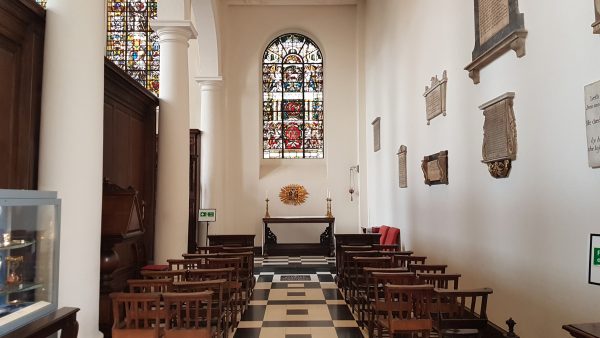 The walls are not actually perfectly square, which is noticeable if you look up at the organ and how the ceiling behind doesn’t quite line up correctly.

There’s also almost imperceptible taper in the pews and floor pattern, to give a false perspective towards the altar, making the church look longer than it is.

The richness of the wood pews contrasts with the white walls, but look up heavenward for the richly decorated ceiling, which is based on 17th-century designs from other churches. 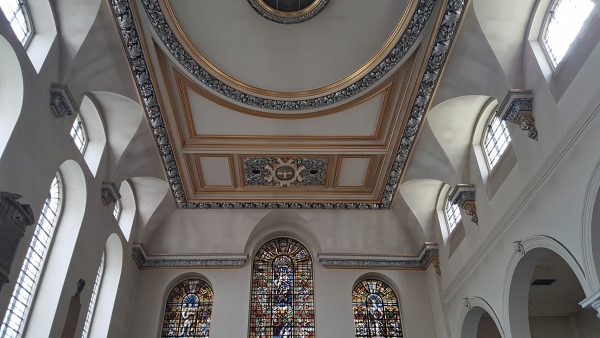 The church of St Vedast-alias-Foster is open daily, but check their calendar if making a special visit in case they have services or events.