The last scheduled train was due to leave just after 7pm, with a final train arriving at Moorgate at 7:40pm and then running empty back to its depot.

After a bit of prodding from UK Railtours owner John Farrow, the operator First Capital Connect (FCC) had agreed to run that last empty train as a special service to say farewell to the service.

I arrived about 7:20pm and there was already a small, but growing crowd of people clustering around the platform waiting for the train to arrive – and FCC staff keeping an eye on things.

The train company was not charging for the train fares (although you had to pay just to get to the platform), but was giving away free commemorative tickets and simply asking for a donation to the Railway Children charity – which was quite a nice touch I felt. Indeed, there was a good natured vibe from the staff on the platform, which was a sadly rare pleasant surprise. 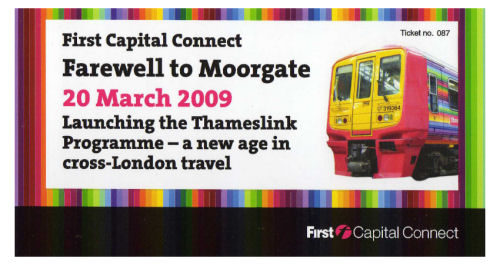 While I appreciate that the transport network is there to, well, transport people – the attitude of a worrying large percentage of train staff leaves a lot to be desired. Does a person standing in the corner with a camera really cause more problems than a family of four with a ton of luggage? I think not.

When I was over at Kings Cross the other week for the arrival of the Tornado steam train, the announcer was quite evidently exasperated with the crowds and rather than trying to light-heartedly control the throng, clearly wished we would all just bugger off somewhere else.

Anyhow – it was therefore quite a pleasure that the FCC staff were clearly in a good natured mood and shockingly for a train station, were quite happy to let people use camera tripods in places. Now that is a rarity – although, I still maintain that a camera tripod takes up less space than a pram – but prams are allowed on platforms without question while camera tripods seem to induce mild panic in station staff.

True to form, I overheard some complaint coming over the staff radios from London Underground which share the station, although I couldn’t get the detail of what had annoyed them. 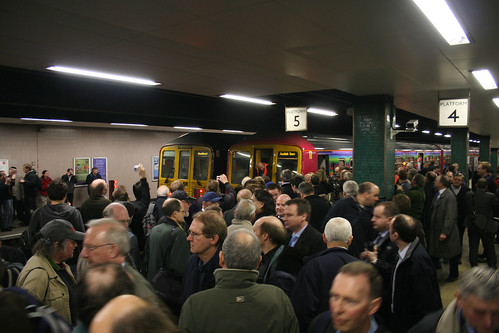 The train eventually pulled in and a mix of random commuters got off to the unexpected sight of a platform packed with people waiting to get on the train – and a large number of super-geeks who were not only going to take the last train OUT of Moorgate, but were determined to have caught the last train IN to Moorgate. I am not quite so dedicated, having preferred to meet a friend at a local pub instead.

Anyhow, onto the train which unlike most evening trains which are full of tired miserable souls heading home, was full of chatty types behaving more as if they are on a day-trip to the seaside.

The trip was uneventful – just a normal train, making a normal trip, but it was the very last one to do that trip, so the mundane had become special.

And it was a silly fun thing to do.

Serious kudos to First Capital Connect for not only running the train, but for joining into the spirit of the event and not treating us train geeks as an annoyance to be tolerated. 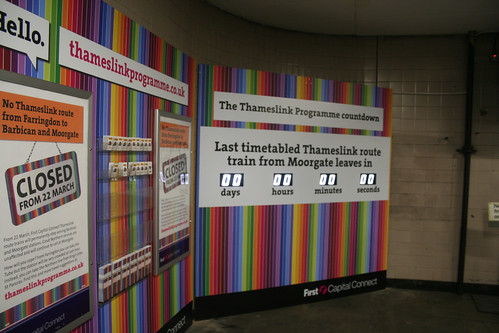 1 Pings/Trackbacks for "The last Thameslink train from Moorgate"