The last chance to ride in the old Metropolitan Line trains

Tomorrow (Wed 26th Sept) will be your very last chance to take a trip in one of the old Metropolitan Line trains running along the main part of the network as a member of the public.

There is a farewell tour taking place this Saturday, but tickets for that have sold out, so the rest of us will have to watch it from the sidelines.

However, as I understand it (and I may have misunderstood!) tomorrow one of the last of the 50-year old A Stock trains will serve the last Oyster card wielding passengers in normal service.

The timetable for train 412 is expected to be:

That’s it – a shade before 7:40pm, the last passengers will disembark the last public 8 carriage A-Stock train left in service. 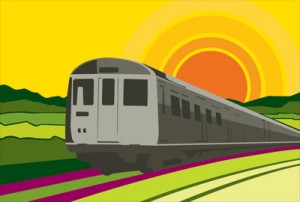 However, on Saturday, is the farewell tour, and the timetable for that has been released as a poster – which you can see here. That train, apart from being obviously the 50-year old model and not the shiny new one will also carry a banner on the front to celebrate the tour.

That train will call at all the stations served by the Met Line trains during the tour, giving plenty of chances to photograph it (no flash!) from the sidelines.

Next January, an even older train will run along the Metropolitan Line, as the London Transport Museum is currently restoring Metropolitan Railway E-Class 0-4-4T steam locomotive No.1 (Met Loco No.1) which was built in 1898.

On Sunday 13th January 2013 the locomotive will recreate the first ever journey on the new Underground, which took place in January 1863 on the original stretch of the Metropolitan Railway, returning steam once more to the London Underground.

Tickets to be on that train will be hotter than the coals in the locomotive boiler.

And no, I don’t know when, or indeed, even if tickets will be sold for that trip. If they are offered, I’ll tell you, but only after I have secured my own one first!