Published 15 June 2009 by By Ian Mansfield Events and Tours

When planning a new building, or significant alteration to one, a person is generally required to get planning permission from the local authority or face fines, or even the demolition of your works. That rule holds true no matter how rich or powerful a person you are, although being rich and powerful might help get a decent lawyer to argue your case.

For example should you live in the City of London, and being a moderately wealthy person, you might object to light industrial works opposite your home and buy up the land to build an extension to your home on. Being rather fussy, you might then notice that to get between your two properties, involves going out onto the main road – so in a blast of wisdom (and expense), you think a small bridge over the road linking the two buildings would be quite a sensible idea.

Unfortunately, failure to get planning permission for the bridge leads to a meeting at the City of London council to debate the issue – and that is what happened to Constance Knollys. Luckily, the council decided that the bridge can remain, and as Constance Knollys husband was a very powerful person, while a fine was imposed, it would be of a nominal red rose that is to be presented to the Lord Mayor.

All this happened in the Year of Our Lord, Thirteen Hundred and Eighty-One and every year – with a slight gap – a single red rose has been presented to the City of London in payment of that fine.

Today was the 628th anniversary of this annual tradition, and I wandered over to watch the public part of the event.

The formal record in the Guildhall reads: “To all persons who these present letters shall see or hear, the Mayor Aldermen and Commonalty of the City of London Greeting, know ye that we have granted unto Messire Robert Knolles Knight, our dear and well beloved fellow citizen, and to Constance his wife, leave to make a Haut-pas of the height of 14 feet extending from the house of the said Robert and Constance his wife on the west side thereof to another house to them belonging on the east side thereof, beyond the lane of Syvendenlane in the parish of All Hallows Berkyngechirche, near the Tower of London, rendering yearly to the Chamberlain of the Guild Hall of the said City for the time being one red rose at the feast of St. John the Baptist.”

For the official guests and descendants of the Knollys family, a service is held in the nearby All Hallows by the Tower church, and then a short wander over to a garden in Seething Lane (originally Syvenden Lane), which is thought to stand on the very spot where the naughty Constance built her second home. Here, the Master of the Company of Watermen and Lightermen of the River Thames chooses a rose to be cut, and after a short speech welcoming everyone and assuring us that they have permission to “vandalise” the garden, the rose was ceremonially cut and laid on a velvet cushion held by the vicar. 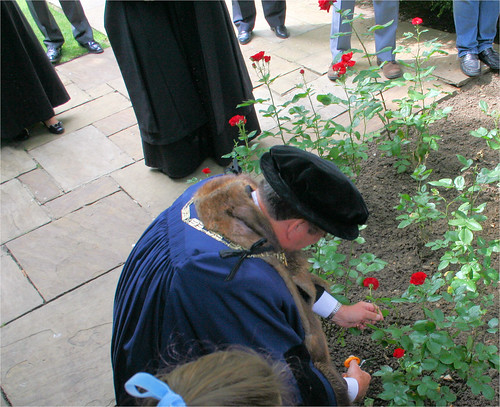 After being secured to the cushion with a pin, the Company, Knolly family and guests then process around the local streets and head towards Mansion House, where the Lord Mayor is waiting for the annual fine to be paid. Alas, the events within Mansion House were private, so my viewing of the event was limited to the cutting of the rose and the procession. 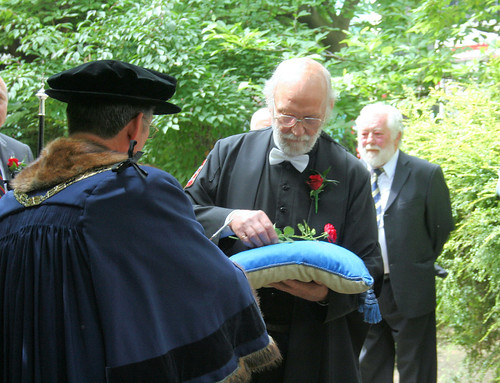 This is one of the older City of London traditions, although it fell into abeyance in the 17th century, until it was resumed in 1924. The traditions is by no means the City’s oldest though and is a mere stripling compared events such as the Trial of the Pyx, or the forthcoming 800th anniversary of London Bridge. 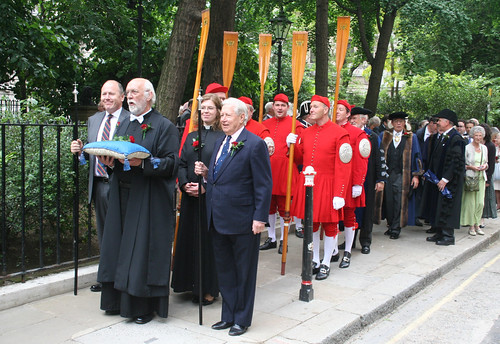 Rather weirdly, about 150 years after the fine was imposed, the family was granted a manor near Henley-on-Thames called Rotherfield Greys – with an annual rent to the Crown, of one red rose.

Incidentally, Constance Knollys was very lucky in having married Sir Robert Knollys, who was very popular with the London populace after he helped put down Jack Straw’s rebellion, which was part of the peasants revolt earlier in the same year as the annual rose fine was applied.

Although the small pedestrian bridge built by his wife is the more famous, Sir Robert himself was not adverse to building bridges, having been responsible for the “stately” bridge over the Medway at Rochester, and also founded a collegiate church of secular priests at Pontefract, in Yorkshire. Though not the founder, he was also the chief benefactor and enlarger of the Church of the Carmelites, known as the White Friars, in the City of London, in the body of whose church he was buried.

Sir Robert died in 1407, and left the house in Seething Lane to the Church in Pontefract. Following the dissolution of the college by King Henry VIII, the land was sold, and later known as Knolles Inn in memory of the original owners.

The garden that remains in Seething Lane is modern, being a left over from the construction of the nearby Trinity House, and was itself nearly built on in the 1920 – presumably this is what helped resurrect the Knollys Rose ceremony in 1924. A project to revamp the gardens is being investigated right now, and the planning document notes that the roses for the Ceremony are now an integral part of the heritage of the site. Long may they bloom there, watched over by a bust of another more famous resident of Seething Lane, one Samuel Pepys. 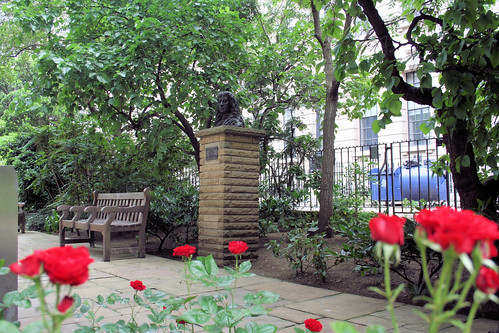 More photos over at my photo gallery.

NEWSLETTER
Tagged with: City of London, Knollys Rose, trial of the pyx