The hovercraft on the Thames

In 1963, a short-lived experiment took place, running a regular hovercraft service along the Thames linking Tower Bridge to Westminster. 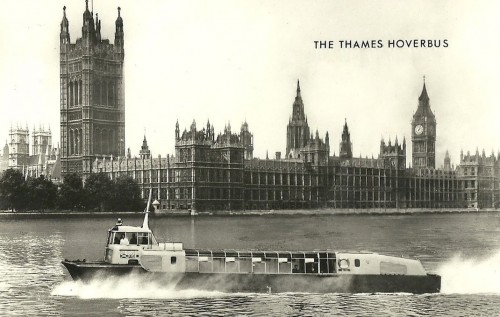 The Denny D2 Hoverbus could carry 70 passengers and speeds of up to 21 knots and the service was launched (if that is the right word) in early July 1963.

It was operated by Thames Launches, who planned to operate a service every day until that October with a schedule of 3 trips per hour. The fare was by, today’s standards, a paltry £1 for adults and 10 shillings for children.

Built in Dumbarton by Denny Hovercraft, the hoverbus travelled under its own power along the east coast, which was at the time the longest trip ever made by a hovercraft.

The hoverbus also required a permit to fly along the Thames, as they were officially classed as aircraft, under the Air Navigation Order 1960. As such, a Times newspaper report into the new service was written by the Aeronautical correspondent, not their shipping one.

The first passenger-carrying “flight” took place on 1st July, with some 500 customers on the first day.

A key advantage of the hoverbus over conventional boats was that it would race along the Thames at much higher speeds as it caused minimal disturbance to the river as it passed over the water, a problem that limits speeds on the Thames to this day.

Pathe News have their own jovial take on the news of the new service.

Sadly, the experiment was a failure, and the builders were forced into bankruptcy the following year. The hoverbus was eventually sold in 1970 to begin life on a new route in the Caribbean linking Kingston, Jamaica, with the island’s Palisadoes Airport.