This morning, roughly 500 members of the King’s Army of the English Civil War Society marched through Whitehall – in the footsteps of King Charles I in commemoration of ‘His Majestie’s Horrid Murder’ at the hands of the Parliament in 1649.

The soldiers of this modern re-creation of a Royalist Army of the Civil Wars are all volunteers and were clothed and equipped in the same manner as their forebears were 360 years ago – although the weapons are fake (alas!). This commemoration, the largest by the volunteer society during the winter months has been held by the Society for the past thirty years.

While the “main act” started on The Mall at 11am, there had actually been a small prelude earlier in the morning, when a group of the King’s Army laid a wreath by the statue of King Charles I on the south side of Trafalgar Sq. It seemed that I was the only bystander there, although I was joined by the Vicar (in casual attire) who would later hold the service in Whitehall. 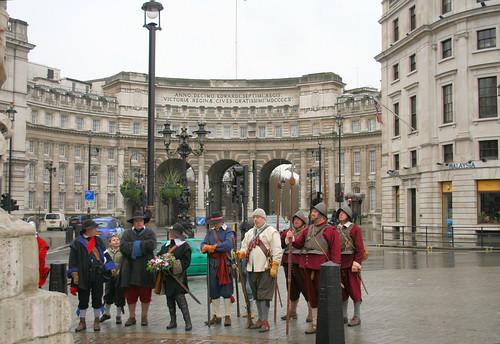 He is the vicar of the Holy Trinity Church in Berwick-upon-Tweed – and it is notable for being the only Parish Church built during The Commonwealth of Oliver Cromwell. 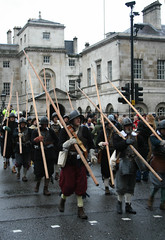 After stopping for a coffee – I wandered over to The Mall to watch the army form up – and then rather them watch the march down The Mall, I scooted off to Whitehall to try and get a better vantage point for the assembly and service (although I failed miserably as it happened).

The march down The Mall took about 15 minutes and then they appeared, marching through Horseguards – and following the footsteps of King Charles I, who walked the same route on the way to his execution. Incidentally, the English Civil War Society is the only civilian organisation permitted to march in formation through Horseguards.

After assembling in Horse Guards Avenue, a wreath was laid under the window in Banqueting House where King Charles stepped out onto a raised scaffold for the public beheading. The wreath laying was accompanied by a rolling of the drums and all staffs were lowered in salute.

The aforementioned vicar then read a service – using a Bible from the 17th century – although the microphone proved to be intermittent. 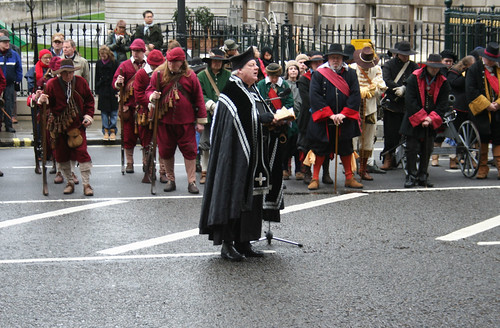 There is then a ceremony to hand out commendations and medals to long serving volunteers of the army – each only being greeted with a great cry of Huzzar! from the army – and then a march back up Whitehall and then down The Mall via Admiralty Arch. The whole thing finished about 12:30. 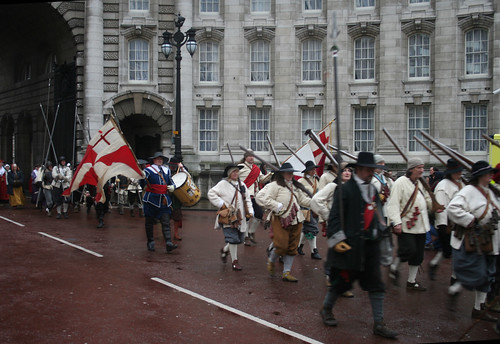 It’s a very impressive morning event, and I am slightly saddened at how few people seemed to be around to watch it. While there was a crowd, it did seem that a large percentage were random tourists who stopped to see what was going on.

The society itself holds mock battles against their arch-enemies, the Roundhead Association throughout the summer, mostly for charity.

A separate organisation, The Society of King Charles the Martyr will meet at Banqueting House on the exact anniversary of the execution – 30th Jan (this Friday) and will lay a wreath of their own at 11:40am followed by High Mass and sermon at noon within the Banqueting House itself. The Society’s relics of “Saint Charles” are placed upon the altar for the Mass and may be viewed after the service.

4 Pings/Trackbacks for "The Horrid Murder of His Majestie, King Charles I"