The History of Beeswax in London

Published 8 July 2010 by Events and Tours

As part of the soon to finish City of London Festival, there was a talk the other evening at the Wax Chandlers Hall all about their trade – bees and beeswax.

The hall itself isn’t one of the grand old city halls that some of the Livery Companies own – mainly as some Germans dropped a bomb on it in the 1940s. Rebuilt in 1958, this is now the sixth hall to have been built on the site, which the Wax Chandlers have occupied continuously since 1501.

As a talk, it was a swift run-through of the life of bees and how/why they make beeswax – and a side diversion into how they make honey which might put some people off the product, although in a way if you drink milk knowing where it comes from, then you can eat honey.

Bees and bee-keeping being an increasingly popular pastime (your correspondent is mulling the idea as well) the room which had evidently been set out for maybe 50 people was standing room only and they had to let people sit up on a high balcony to create space. 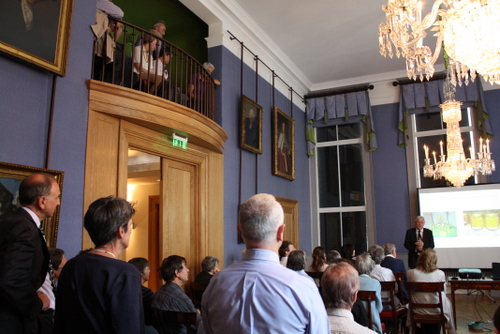 The earliest record of beeswax in the City comes from the 12th century, when a royal decree was promulgated, setting out rules governing German merchants trading in beeswax in London. That almost certainly relates to the Steelyard by today’s Cannon Street station.

The Wax Chandlers themselves received their first Royal Warrant from King Richard III in 1484, which makes them the only Livery Company to have been granted a Warrant by the ill-fated King.

A Candle, A Candle, My kingdom for a Candle!

Very curiously a brief mention was made of the remains of an old building, now underground just under a manhole cover in the courtyard of St Paul’s Cathedral which made up their earliest property. Must investigate further!

Each year though, on 14th Sept, the Wax Chandlers still present a pound of beeswax to St Paul’s Cathedral for use in their Great Taper.

I also tend to burn beeswax candles, and there is a nice stall in the Greenwich Market that sells them most weekends.

As mentioned above, the Wax Chandlers have never been a huge company, being made up of around 100-120 members at a time, although their wealth rose in the years following the Plague as people become obsessed with the cult of praying for dead relatives – each prayer needing a candle.

Today they still function as a charity and trade body – and are working to promote beekeeping in general.

The Hall is usually open for London Open House Weekend – now irritatingly renamed as Open City,  and if you are in the area is worth sticking your nose inside for a few minutes.

A long rambling exhortation from a member of the audience to plant nice plants was a bit wearing, but he did mention a rather interesting website hosted by the Natural History Museum – and it will tell you what plants are typically native to the area. Ideal if you are about to visit the garden centre and want to also look after local wildlife.