The hidden wonders behind closed doors and under streets

A lot of people have a fascination with the disused London Underground, London’s sewers or “secret” military bunkers, and I count myself amongst them, to the point of being a bit of a geek in my degree of interest.

However, even the average person will usually express a level of interest about such things, even if limited to casually reading a blog post or magazine article they come across, before moving onto other matters.

Why is it though that so many people can express an interest about the same topic? If walking down a street with friends, spot a large looking manhole cover and ponder aloud what lies beneath it, and I’ll bet that the conversation will, even if just for a short moment, drift into speculation.

We have an innate curiosity, not about the subterranean world itself – but for the hidden, the concealed, the mysterious.

Create a locked doorway and people will always wonder what lies behind it. Is it a cupboard, or the entrance to a hidden world that is normally only seen by technicians and engineers. Many years ago I persuaded a building services manager to have “Open Days” for the office workers to see the basement boilers and facilities. He was sceptical, but went ahead, and nearly half the building booked a tour.

People don’t think about how the air conditioners work, until you ask them – then watch as curiosity rears up, and watch the reaction if they are offered a chance to find the answer. The long running saga about what lies behind the Private Rod door at Embankment station being a good example.

Opening mystery doors takes you into a different world, as the clean environment we inhabit has a sudden transformation where bricks are unpainted, strange signs warn of unfamiliar issues and pipes carry otherwise ignored yet vital services around the building just as humans above walk around with sheets of paper to show people.

The curiosity about what lies behind closed doors is rewarded by seeing a very unusual environment that is totally different to anything we normally experience. We are thrilled by the experience.

This innate curiosity about the world on the other side of that Looking Glass has been used in fiction for almost as long as fiction has existed. Whether it Alice in Wonderland seeing whole lands of curiosities, and even dangers to the Stargate TV series, which is basically, just Alice in Wonderland for the Sci-Fi era. There is even the ultimate doorway, that of death, though which we all pass, and in our curiosity about the other side, create all sorts of fantastical myths about a world utterly different to the mortal lands we inhabit today.

This desire to create myths about what we can’t see leads people to engage in all sorts of conspiracy theories about what lies beneath the streets we walk. The oft-cited and totally implausible tube tunnel under Buckingham Palace (haven’t you heard of helicopters?) to the slightly more real tunnels under Whitehall, people feel compelled to imagine that mighty government is bigger and more ordered than it really is.

The belief in a powerful government that can build such marvels – even in London clay – is almost a replacement in our secular world for the beliefs in a powerful god who can offer the resurrection to a sunlit upland.

The rare chances to enter these strange other worlds excites such a wide spectrum of people that it is a fascination in its own right to people watch when such places are opened. The recent popularity of the Aldwych station tours being a case in point.

During Open House weekend, it’ll be the tours of the Neasden bunker, or sewer pumping stations that booked up first, and even building sites have learned to cut a viewing window into their wooden hoardings to let the hurrying hordes outside pause and stare for a moment.

The amount of excitement in Ajit Chambers attempts to open up some of the disused stations is a case in point, although in opening them up, I do worry if some of the magic will be lost. As an explorer of such places (when invited by the owners!), part of the appeal is the darkness, the hidden corridors that lead off who knows where, the dirt, the random bits of machinery that flash into existence for a few seconds as the torch alights on them and then fade back into the darkness.

To open up such tunnels you have to take away the magic, make it safe, bright, clean. The underground facilities will fascinate when opened up, but otherworldly atmosphere has by necessity to be pushed back behind doors that only staff will pass through.

We will be in a curious underground world – and yet will still hanker to wonder what lies behind that closed door. 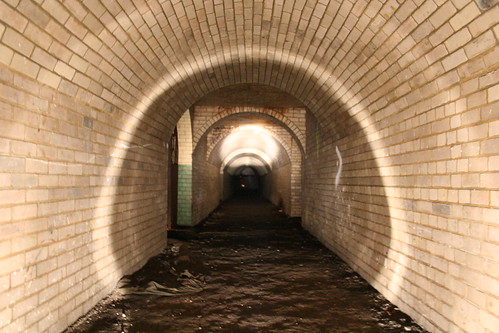