On this day, 492 years ago, the center of London was abandoned as some 20,000 people fled the arrival of a massive tidal wave that was to devastate the centre of the city.

But the flood never arrived.

So why did Londoners abandon their homes and workplaces with such a conviction that destruction was about to happen?

In the 1520s, astrologers were increasingly predicting that a mighty flood would rush up the Thames and destroy the city. And they put an exact date on when this calamity would occur — 1st February 1524.

It was claimed that “the waters of the Thames would swell to such a height as to overflow the whole city of London, and wash away ten thousand houses,”

The date was no idle whim though, for it marked a Grand Conjunction in astrological circles. The previous Grand Conjunction, of 1484 heralded the Reformation, so it seemed likely that the next one would be equally deadly to society.

In February 1524, all seven major planets would be in conjunction, and that would cause massive tides, so the astrologers claimed, which would inundate London.

Thus warned, an estimated 20,000 people fled the city on the days before the flood was expected, and made preparations. Many of the richer sort took up their abode on the heights of Highgate, Hampstead, and Blackheath; and some erected tents as far away as Waltham Abbey on the north, and Croydon on the south of the Thames.

For example, oft cited is the (disputed) story of William Bolton, prior of St Barts church who erected a tower at his home in Harrow as a refuge from the predicted floods. On the eve of the deluge, he took residence in the tower with his servants and stocked it with provisions to last out the disaster.

The mass awareness of the impending doom was aided by the then recent development of the printing press which made it easier to distribute seditious leaflets about the prediction, spreading the panic further than it might otherwise have reached.

The main protagonist was Luca Gaurico, who was an astrologer based at The Vatican — at a time when astrology was deemed to be perfectly sensible science — and it was his writings which were interpreted as predicting a flood.

Another astrologer, Johannes Carion published a pamphlet in 1521 showing the flood, followed by social breakdown as the peasants revolted and executed a clergyman.

Other pamphlets warned that the flood of 1524 was just the beginning of the end of days.

It’s estimated that more than 60 writers published predictions about the great deluge due to hit in 1524.

It wasn’t just London though, with most of Europe in an uproar, and reports of arks being built in Germany and Italy by the wealthy who were determined to ride out the storm.

Of course, as is often the case with the failure of an apocalypse to arrive, the prophets in this case blamed human error — their calculations were out, by a hundred years.

Following the failure of the flood to occur, rival astrologers accused Gaurico of exaggerating his findings, and censured him in the way that modern scientists are wont to do when faced with similar slights to their profession.

Weather wise, the year 1524 was actually dryer than usual. 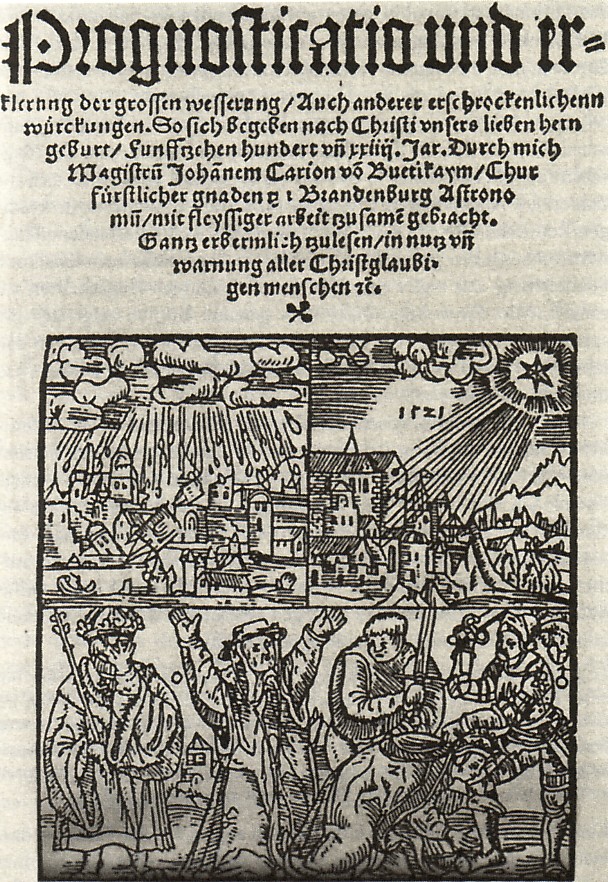 History of the Apocalypse, by Catalin Negru

Extraordinary Popular Delusions And The Madness Of Crowds, by Charles Mackey

The Environs of London: Kent, Essex, and Herts, by Daniel Lysons