The church can in fact trace its heritage back to the time of the Restoration when the Spanish Embassy was established in what is today the Wallace Collection museum and a suitably Catholic chapel was set up in a nearby street. 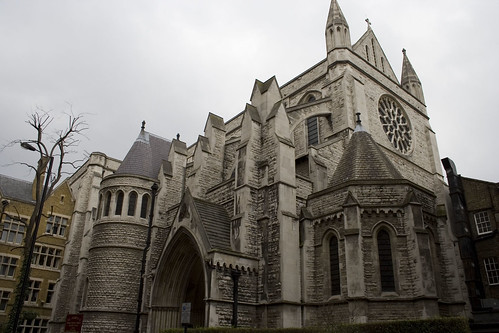 That chapel was on leased land so the congregation raised the money to buy their own plot of land – as it turned out, on the other side of the street. Designed by the father/son ecclesiastical architects, Edward and George Goldie, construction started in 1887 and the partially completed church that stands there today was opened in 1890.

It wasn’t consecrated until 1949 though due to some rude interruptions of previous attempts — such as the death of a Cardinal and the little matter of a world war.

Impressive looking from the outside, although more so from the back than the official entrance, the interior strongly resembles Medieval gothic with its tall stone nave and external buttresses. 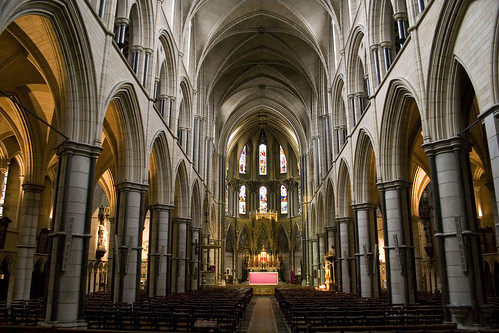 However, unlike its medieval ancestors, the walls are unadorned and retain their resolutely stoney appearance — which I personally prefer. Unlike some modern churches that appear old in design, but use modern building materials – this is is architecturally authentic. It is actually made from stone and brick, not steel covered facades.

Seating 800 people, the church is a shade under 200 feet long, and just under 70 feet high. The gloomy interior added to the atmosphere, and the eye is instantly drawn to the altar at the far end.

The heptagonal apse has sumptuous gilt decorated images of a suitably religious nature. This was not completed until 1899, nearly a decade after the church first opened for worship. 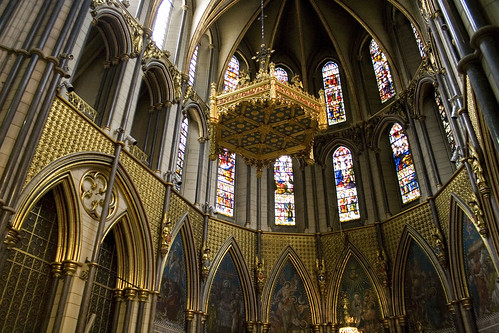 Much of the interior decoration is by John Francis Bentley, who had been the resident vicar’s first choice to design the entire church, but lost that commission and ended up with just the decoration instead. 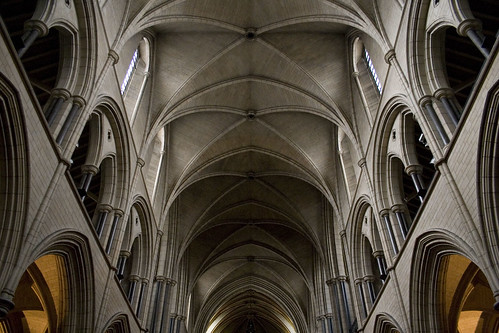 While I find catholic religious doctrine totally at odds with my rather more relaxed attitude to religion in general, I had to admit that they do have some pretty nifty churches.