The Destruction of London’s Newgate Prison

In a move which would impress George Orwell, the politicians of 1780 were seeking to change the above statement so that the British were no longer treating Catholics as second-class citizens, and in doing so would trigger what are probably the worst riots that London has seen for around 500 years.

In the process, not only would Catholic Churches be torched, Newgate prison would be totally destroyed, the Bank of England attacked and the Fleet and Clink prisons would be severely damaged.

The army would be called out and by the time things calmed down, nearly 300 people would be dead and many hundreds more injured.

The political temperature started rising in early 1780 when Lord George Gordon became the leader of the Protestant Association and strove to overturn the Papists Act, which had been passed a couple of years earlier in 1778.

This particular act had been designed to overturn the anti-catholic laws passed in 1698, which were frankly largely ignored anyway. However, the old adage about letting sleeping dragons lie applied more strongly here than at almost any time as the abolition itself became an opportunity to awaken dormant anti-catholic feelings in England.

Lord Gordon was a populist who made some completely outrageous claims, such as that there were 20,000 Jesuits hiding in tunnels under the River Thames waiting for an order from Rome to rise up and attack London. He was however widely believed and a mob formed to support his aims to introduce anti-catholic laws.

The destruction of Newgate Prison was the most egregious of the many acts of the rioters, and their actions have been recorded in the six-part series, Old and New London – of which I recently acquired three copies.

Exactly 230 years ago – on 2 June 1780 a huge crowd, estimated at 40,000 to 60,000 strong, assembled and marched on the Houses of Parliament, and attempted to force their way into the House of Commons, but without success. Lord Gordon, petition in hand, and wearing in his hat the blue cockade of the Protestant Association, entered the Commons and presented the petition.

Over the next few days, various acts of riotous behaviour occurred, including rampaging through the Irish Catholic slums in Moorfields.

The most significant attack though took place when the mob came pouring down Holborn on the evening of the 6th June 1780 bearing three prominent flags with Protestant slogans. A sailor named Jackson had just hoisted one of these banners in Palace Yard, when Justice Hyde unleashed horsemen to repel the rioters. Their failure lead to the sacking of the Justice’s house, and the mob moved on from the Old Bailey to Newgate Prison. 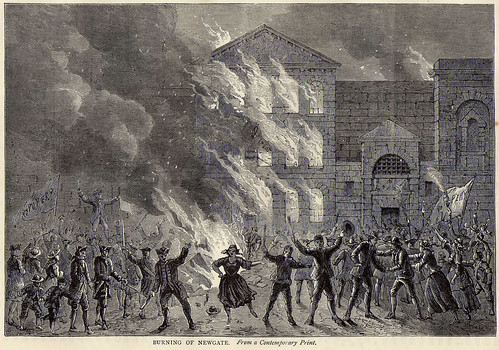 From New and Old London - my own copy

The mob attacked the prison gates using ironmongery stolen from blacksmiths in Dury Lane and Long Acre but were unable to penetrate the gates. They then piled up wood against the doors and despite the repeated efforts of the turnkeys inside to put the fires out, the heat eventually melted the lead solder than held the hinges in place.

The prisoners released, the mob then went down to attack the Fleet prison and later to burn the House of your correspondent’s namesake, Lord Mansfield in Bloomsbury Square.

Over the next few days, the mob variously sacked the Catholic chapel in Lincoln’s Inn Fields; the house of Sir George Saville in Leicester Square (next to the Empire today); the house of the blind magistrate, Sir John Fielding of Bow St Runners fame; various smaller “benches” where prisoners where held, and attacked, but were repelled at the Bank of England.

A slightly light-hearted moment occurred when a mob went to attack Kenwood House, the home of the Lord Chief Justice, the Earl of Mansfield, who was suspected to have Catholic sympathies. However, they stopped at the nearby Spaniard’s Inn where the innkeeper plied them with so much beer that they got drunk – and were subsequently arrested by the King’s Men.

The army was finally given orders to fire upon groups of four or more who refused to disperse on the 7th June. About 285 people were shot dead, and several hundred more were wounded. Of those arrested, about twenty or thirty were later tried and executed. Lord Gordon was arrested and charged with high treason, but was found not guilty.

The proclamation signed by The King is available on the London Gazette [pdf file] website.

It is estimated that the damage from the riots cost £180,000 to put right. That is equivalent to over £230 million in today’s money – based on purchasing power.

The riots had a profound impact across Europe which had always been wary of the English form of Parliamentary democracy and killed off English attempts to forge a European alliance against French assistance during the American War of Independence.

The riots also lead to calls for a formal police force, a radical concept at the time when police forces were seen as an arm of an absolutist state. The wariness of the idea lingered for many decades, and the Met Police were not finally formed until 1829, although local constables and a river police had existed before.

Lord Gordon was imprisoned in The Tower and later tried for his crimes, but found not guilty. In a bizarre twist though, a man who sacked London in support of the Protestant religion moved to Birmingham and converted to Judaism.

In 1787 he was convicted of defaming Marie Antoinette, and sentenced to five years in the very prison his mob had destroyed – the now rebuilt Newgate Prison. He died there in 1793.