An angry Londoner once wrote “The sudden resurrection of the Dead in Southwark is become the general Subject of Conversation, and has render’d Death far more frightful and Terrible,”

The unknown Londoner was writing in February 1718 and complaining about the habit of the bodysnatchers, criminals who dug up the dead from the City’s graveyards and sold their bodies to medical students for dissection.

At the time, very few dead bodies could be legally obtained for medical dissection and surgeons were restricted to those of executed criminals. By the early 18th century supply could not meet demand and a lucrative and flourishing illegal trade in corpses emerged in London. 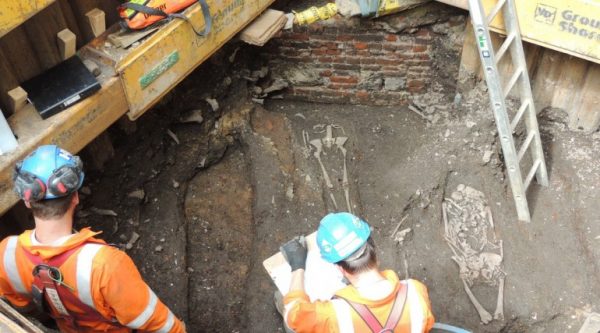 The New Churchyard was a municipal and non-parochial burial ground established in 1569 — where Liverpool Street station is today — to relieve existing churchyards. People from all walks of life were buried there but especially those at the margins of society, including religious dissenters, the poor and plague victims.

It is estimated that by the time it closed in 1739, 25,000 people had been buried there, making it a tempting target for the resurrectionists, as body snatchers were often called.

The burial ground was excavated in 2015 during Crossrail’s construction of the Broadgate station entrance.

MOLA’s research charts the rise of the so-called ‘Corporation of Corpse stealers’ – London’s gravediggers making a handsome profit from bodysnatching. One such character was Joseph Bowen. He was prosecuted 300 years ago, in 1717 for stealing a body from the New Churchyard and attempting to sell it on for dissection. Bowen probably received sixpence for digging the grave, but was promised one guinea for exhuming the body and delivering it to the surgeon.

While excavating the burial ground, archaeologists uncovered a sand-filled coffin topped with heavy stones. This discovery is rare archaeological evidence of the preventative measures taken to thwart bodysnatchers.

Robert Hartle, MOLA Archaeologist, said: “We realised immediately this burial was something highly unusual. Archaeological evidence associated with bodysnatching is extremely rare. Our subsequent historical research has exposed a truly fascinating and illicit side to this burial ground.”

Dating evidence suggests that this burial probably occurred during 1720–1739 and indicates that the citizens of London were deeply fearful of the bodysnatching by this time and the discovery adds to the understanding of how this fear was managed.

The graveyard was managed for just over 100 years by the Clitherow family, and while there is no evidence that they were complicit in bodysnatching, it is clear they operated various moneymaking schemes and ‘irregular practices’ throughout their tenure: they overcharged for burial, allowed locals to dry cloth in the burial ground, and disturbed burials to build themselves a house and outbuildings.

Archaeologists discovered over 4,000 pieces of bone turning waste in with burials that suggest that Clitherows were fly-tipping in the burial ground and perhaps even providing a waste disposal service for the neighbourhood. Today these discarded items offer unique insight into the local industries, market, fashions, tastes and trends of the time.

MOLA’s research also explores the histories of some of those buried at the New Churchyard which was especially popular with religious dissenters. One of the more eccentric people interred at the burial ground was Lodowicke Muggleton, self-proclaimed prophet and founder of ‘Muggletonianism’. His funeral was witnessed by thousands of spectators in 1698.

The New Churchyard was also strongly associated with the Leveller movement.

William Walwyn and John Lilburne, two prominent and oft-imprisoned Leveller leaders, were both buried at the New Churchyard. Lilburne was a Quaker and his corpse was placed in a plain wooden coffin which was carried head-first to the New Churchyard to be interred ‘without Christian burial, or any ceremony’.

The full findings are due to be published in a book, ‘The New Churchyard: from Moorfields marsh to Bethlem burial ground, Brokers Row and Liverpool Street’ later this year.