The future starts here? Or does it?

Published 15 May 2018 by London exhibitions, Museums

One thing anyone who has ever looked at visions of the future will be able to tell you, is that our predecessors were utterly wrong. So it takes some gumption for the V&A to repeat the same… mistake?

An exhibition about the future is big, bright colours and neon, in an age where most people see gadgets as white, small and austere.

Opening with a robot folding the clothes left behind by messy humans, it weaves a tale of how the future could be hyperconnected with everything monitored, and monetised. 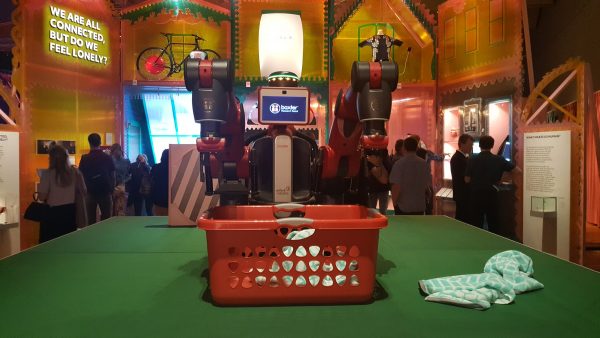 But its also a look at a future that is smaller in a financial sense. The future has always been expensive, whether it was the industrial revolution, or investing in new tech start ups. Increasingly the future is crowd-sourced, with the public able to dip in with their own modest investments, literally buying into the future.

A large section looks at how that shrinking of the barriers to entry is also opening up dialogue, with the walls of politics falling to hashtags and crowd-sourced apps.

It’s often said that direct democracy would see the worst of mankind turned into law that oppresses the minorities of the time, but the way twitter mobs can spring up faster than a Socialist Worker protest banner is changing democracy into direct action. Will people permit politicians to remain the gatekeepers to how laws are made, or will the laws of the future be driven by clicks of the like button?

The space that probably is closest to how the future will be, if not in how they show it, is in the medical sphere.

It’s not unreasonable to say that the next great revolution will be medical, extending lifespans and the quality of life through cures. But where the cryogenics shown here offer a chance of the resurrection, it’s akin to using a steam engine in the nuclear age — a very clumsy solution to a problem.

More realistically the bag of pills on display, to enhance life will be the future – small and expensive. And white. 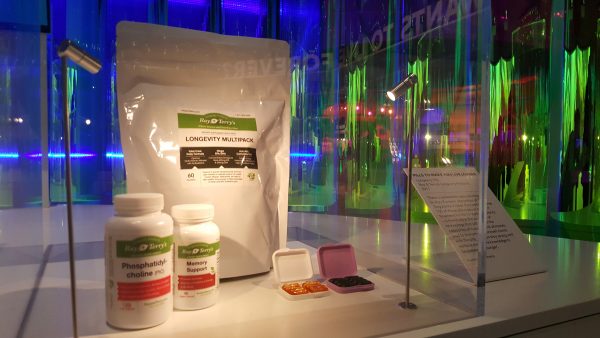 The exhibition is a colourful confection of ideas, and it can be a bit overwhelming at first, but it is divided into zones. Unfortunately, there seems to be a lack of a narrative between the zones and the objects – it’s a cluster of items put on display more to create an exhibition than to tell a story.

The exhibition, The Future Starts Here is at the V&A Museum until 4th November. Entry is £16.