The Fugitive Futurist – or how the Thames was drained of water

I am a bit of a fan of how people in the past thought the future would look like, and my memory was recently prompted to recall a short black&white film I saw for the first time last year – at an outdoor movie showing in Trafalgar Square.

The film is about a down on his luck gambler who meets up with a character who claims to have a box that predicts the future. We are shown various visions of the future – as imagined by someone in the 1920s.

While Trafalgar Square is now flooded by the river, The Strand next to it is still as busy as before – although strangely, we seem to still be using horses in this futurist vision. Maybe climate change makes the petrol engine illegal? 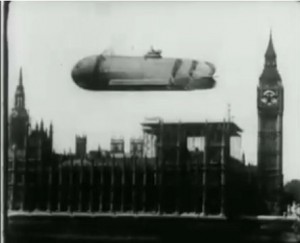 Most visionary though as the images of the future of transport with the Houses of Parliament turned into a passenger terminal for airships, and Tower bridge having trains running along the upper walkway.

Topical for this week though, was the fact that the Thames had been drained and turned into railway tracks – so that’s why the Thames was removed from the tube map! 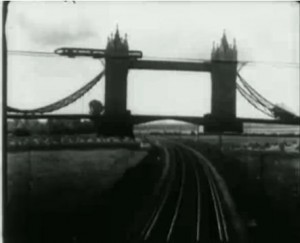 You can watch the short film over on YouTube (where else?).