I was going to take a slightly longer trip, but a mishap took place, which I will recount below.

I had planned to catch the very last trip ever, but some irritating blogger published the timetable, and it was becoming increasingly apparent that the last train would be PACKED, and hence a heightened risk of not getting on board resulted in an early afternoon trip instead.

The penultimate trip from Aldgate in fact. A station with four platforms can make it difficult to guess which platform the train will arrive at as it pulled in from its latest trip, but fortunately, the other platforms were filled with trains at the appointed arrival time, letting lots of suitably dressed train geeks get our treasured photos of the train arriving in the gloom. 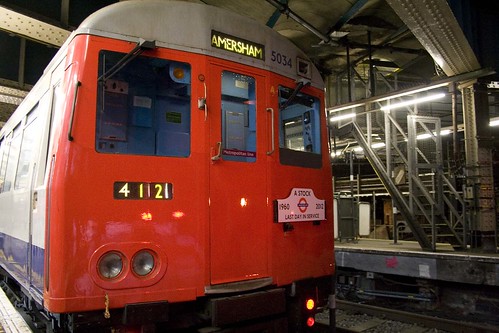 Also a chance to breach the do-not-pass barrier at the end of the platform to get that close up photo of the commemorative sign, which was almost certainly highly naughty, but no one minded. Not today at least.

This train may have had a commemorative sign on the front (and rear), but it was no commemorative trip – just a humdrum run for the last of the A Stocks along its normal routes. As such, lots of unknowing passengers trotted down the stairs to catch “any old train going where I want” only to be confronted with a train full of smiling faces. 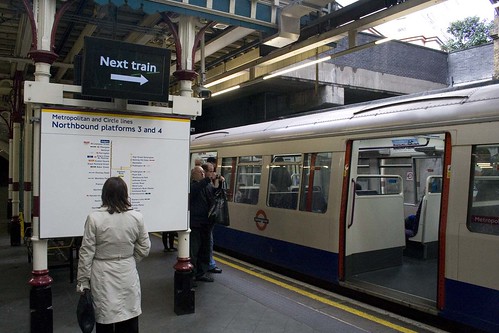 Next train – but also the last train

Yes, it was as if the Olympics had come back as the tube filled up with bored commuters, but also large numbers of happy smiley people out for an exciting time. Accompanying them could be seen a couple of film crews and a good number of LU managers.

A final chance to sit in the high-backed seats so beloved of long distance travellers on the line, but loathed by the person on the edge as they never seemed to quite fit three people on comfortably. 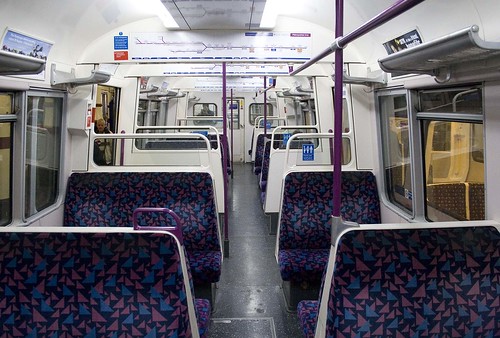 The train departed on its normal, yet oh so special trip, passing through stations manned by people holding cameras aloft as it approached. ITV’s film crew anguished about whether they could interview people in the train as it was too dark. A small group of young enthusiasts sellotaped hand-written notes on the windows and maps so that even the most ignorant of commuters might notice the significance of their trip. 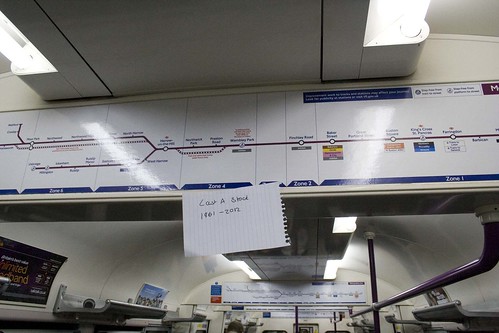 As the sellotape wielding fans worked their way along the carriages, I made my way backwards down the train. Hopping off at Euston Square to swap carriages, the doors closed and left me bereft on the platform.

Then my camera jammed as the train pulled away leaving me without a final photo, or farewell tap of the carriages. The fun atmosphere on the train had left me behind. I was mortified.

I had planned to get off at Baker Street and head home via another line, but as it was, I took one of the new shiny Met Line trains back whence I had came. 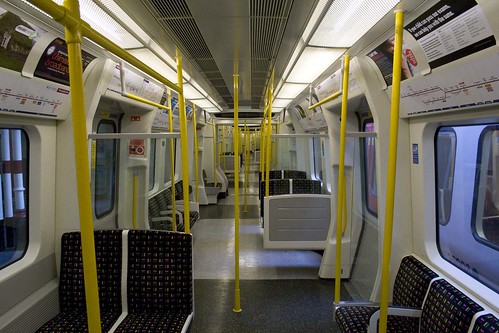 Of all the LU lines, the Met trains were always just that bit more special and different from the others. Even the same sized District/Circle line trains always felt more municipal than the Met. This was a line retained its aloof feel of something which deigned to visit London from the shires but would rather not hang around too long thank you very much.

Now, we have new bright shiny trains with air cooling, walk through carriages and lots of modern accessibility features. But they have lost the character. Understandably with so many trains being replaced across the country at the same time, there is a uniformity of design and aesthetic as we aren’t waiting a decade between upgrades to let fashions change.

The Met is now a bland municipal service which is undeniably vastly more suited to 21st century transport, but I think a lot of people will miss the differences the old trains exuded on their commute.

Diamond Geezer caught the train after me.