The Festival of Britain’s clock tower in East London

A remnant of the 1951 Festival of Britain can be found in East London far from the South Bank, but is, for locals, as vibrant a focal point. 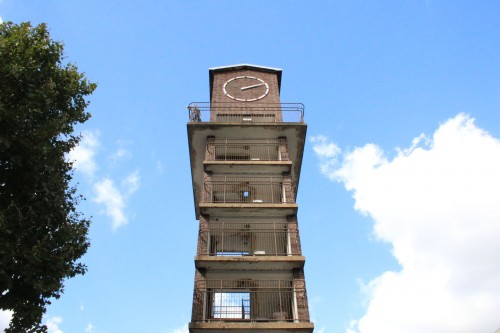 Chrisp Street Market was the first purpose-built pedestrian shopping area in the UK, and was designed as part of the Festival of Britain. As such, it has a similar, if cheaper, air of modern construction about it.

Where the South Bank got a Skylon, Chrisp Street Market got a clock tower. Guess which one still remains.

The shopping area was designed by Frederick Gibberd as part of the ‘living architecture’ element of the 1951 Festival of Britain. His architecture has been described as a softer version of modernism, and certainly, the design has a more human scale to it.

Even the lofty clock tower was designed in part as a local landmark and a local viewing platform.

Two staircases spiral upwards (or downwards if at the top) in a reculincular double-helix, with a narrow walkway around the top, and a now very weather-worn plaque which may once have pointed out the highlights of the then still bustling docklands. 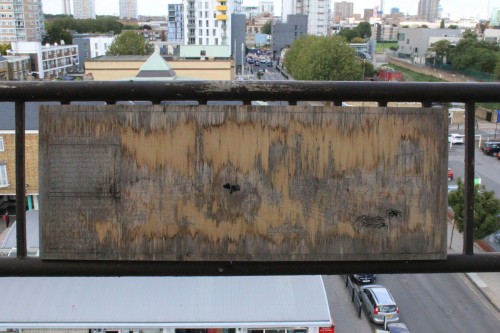 Today, the area is surrounded more by high residential towers than tower cranes, and the DLR trundles along a street away.

The clock tower is also showing its age. The electricity cables that are haphazardly strung between floodlights could do with being tidied up, and a modest touch of a scrubbing brush wouldn’t go amiss.

From within the lights and cables are ugly, but it looks rather pretty at night, from the outside. 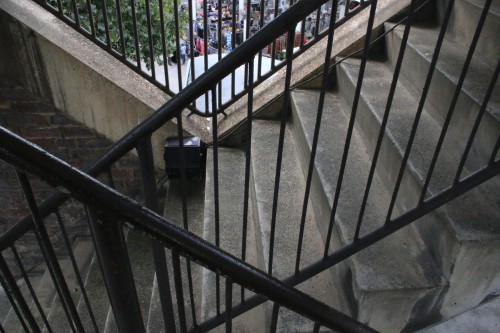 Two staircases were built, with two entrances, maybe one for up and one for down. But on this rare chance to use the stairs, only one was in use. The other is blocked by a locked door and a barrier at the top.

For all that, it’s a bracing walk up steps that are fractionally too small to be comfortable up to the walkway, with a handrail that is high and solid enough to be reassuring, without blocking the views. 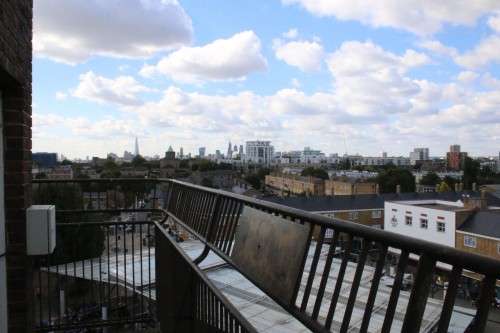 Sadly, the doors to the clock tower are usually kept locked shut. It may be that idealistic views about how people would use local amenities swiftly soured in the reality that sunk many post-war council estates.

It seemed modestly popular on my ascent, so could probably survive regular weekend openings, as a local counterpoint to the red olympian agglomeration just up the road.

The tower was open for Open House Weekend. Unsurprisingly, Diamond Geezer got up there before me. 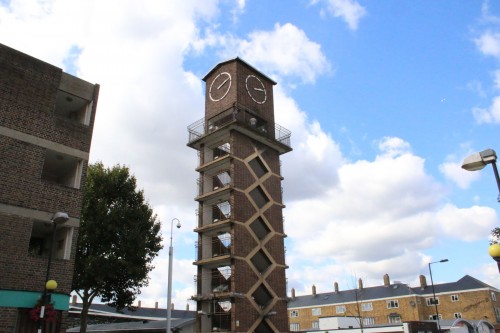