We’re approaching the Mayoral election season (already?), and the perennial issue of driverless trains on the London Underground has reared its head once more.

Politicians of most colours and experiences will talk about their plans to improve London’s transport, and some, with more of an eye for a sound bite than real understanding of the issues, will talk about driverless trains.

After all, the DLR is driverless, so it can’t be that difficult. Can it?

Firstly, lets set one thing straight — it’s pretty much a certainty that at some point, the tube will be driverless.

However, no grandstanding by a politician will make it happen. Even with all the pieces in place, it’s a decades long project, and the most optimistic projections will see another six mayoral elections pass before the first driverless tube train carries passengers.

Also, as with the DLR, driverless doesn’t mean unstaffed.

So if your political goal is to ban tube strikes, then going driverless wont prevent that happening, as anyone who has experienced a strike on the driverless DLR will confirm.

The DLR was built to be driverless, but very nearly wasn’t, and could be driverless thanks to being essentially a brand new railway, with small trains that travelled comparatively slowly. It was also able to push through the driverless aspect as a technology show-off for British industry.

The DLR has been around for 30 years, so why isn’t the tube driverless yet?

To put one issue to bed, yes, the unions would kick up an almighty fuss. A test of a Jubilee line train using Willesden Green sidings under automatic control in October 2016 didn’t go down well with the unions.

But, London Underground’s planning runs into the decades in some places, and the unions concerns about loss of drivers wouldn’t prevent the sort of very long term thinking that would be needed if driverless trains were to be introduced.

And London Underground is moving in that direction already. It doesn’t matter what Mayoral hopefuls say, TfL is already working on it.

The technical specifications for the New Tube for London, which will start to arrive on the Piccadilly line from 2023, includes an option for driverless operations — in the future. 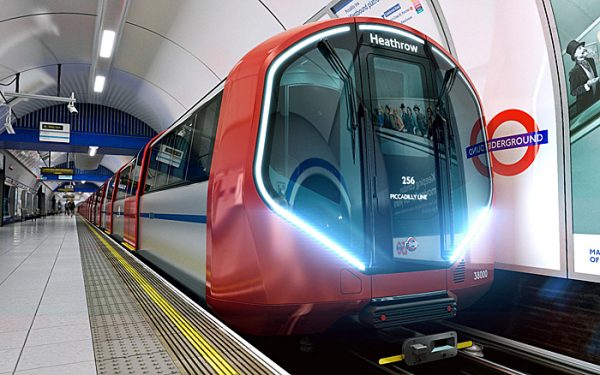 Whoever is elected Mayor in 2020 will see the introduction of those new trains, and there will be a driver in every single one of them. It’s simply not possible for an incoming Mayor to change that.

So when someone says they’ll introduce driverless trains, they mean they’ll do no such thing whatsoever.

They might be able to nudge TfL a bit in that direction, but that’s the best that can happen.

As the new tube trains for the Piccadilly (and other lines) will have the option to go driverless, what is holding them back?

The rest of the tube infrastructure is the main issue, not the trains. The signalling will be upgraded for the new trains, and to replace worn out systems, but it would need an almighty overhaul to bring it even close to the requirements for driverless trains to work.

Back in 2014, it was suggested that if works began in 2016 to add platform edge doors to the Piccadilly line platforms, then along with everything else, it might, just be possible to have driverless trains on that one line in 2027.

As you can guess, we’re already a long way off that target, and if a new Mayor were to demand it, it’ll be their successor who cuts the ribbon, in the mid to late 2030s, at the earliest.

All this costs a vast amount of money, and unless Mayoral hopefuls are sitting on a mystery pot of cash, that’s not going to happen either.

But would it be worth spending that money?

It depends on your aim.

If it’s simply to banish tube strikes, then it’s a total waste of money. The DLR still has strikes after all, and there’s no way that the tube trains would run without onboard attendants, who can go on strike.

To spend billions just to prevent the occasional, if very annoying, tube strike would be the height of folly.

The main reason for doing it though is to increase the number of passengers the tube can carry.

Computers are, generally, more reliable than humans — even in as hostile an environment as a tube tunnel with all that grease and oil and moving parts just waiting to confuse a binary thinker — and one huge advantage of driverless is to run existing timetables more reliably, not to mention a nice feature of being able to ramp up capacity at short notice when needed

A computer system should be able to run trains closer together safely and that means more trains per hour, so they can carry more passengers.

With London’s population surging — that’s not immigration by the way, just London’s young doing what young people do — increasing the transport network capacity is vital.

Hence the imminent arrival of the Elizabeth line and in the 2030s probably Crossrail 2.

So driverless trains are possible, if very expensive, and will probably arrive, in a few decades time, but only because they’re the solution to a capacity problem, not because a politician made an expensive promise several decades earlier.

However, it’s not the trains or the tunnels or the computers that would be the biggest cause of a delay in going driverless.

If you have the trains running closer and dropping off more passengers onto narrow platforms ever more often, you reach a point where the station itself can’t get them off the platform fast enough before the next train arrives.

Even with drivers onboard, by the end of the 2020s an additional 21,000 customers will be able to board Piccadilly line trains every hour during peak times.

If the aim of driverless trains is to increase the number of passengers that can be carried in the rush hour, then the stations need upgrading to cope with the extra people arriving.

Even with platform edge doors, crowds remaining on the platform waiting for space to leave is unwise.

Pretty much every rationale for tube station upgrades over the past decades has been based on coping with overcrowding. The works at Victoria, Kings Cross, TCR, ongoing at Bank, soon at Holborn and Camden are all about having more tunnels to absorb the crowds so they don’t wait on platforms, and more escalators to get them out of those new tunnels.

The recent trial of standing on the escalators at Holborn didn’t get any individual person out quicker, it increased the carrying capacity of the escalators so they could soak up more people waiting at the bottom to leave. That marginally increased the station’s ability to deal with more trains.

On the Piccadilly line, you could need to look at substantial upgrade works at Hammermsith, Earl’s Court, South Kensington, Green Park, Piccadilly Circus, Kings Cross, Arsenal and Finsbury Park. Minor works, mostly to do with ticket hall expansion and additional staircases at the regional stations can also be expected.

There’s even very long term thinking about how to do away with ticket barriers, so that they can remove that bottleneck in getting people out of stations faster.

If planning for that started today, and the billions it will cost was available, it’s still at least a couple of decades of work to carry out.

The trains may go driverless eventually, but it’ll be the stations that determine when.

So if someone says they’ll push for driverless trains when elected Mayor of London… shake your head in despair and move further down the carriage.