Built as a folly, the Great Pagoda was as much a hit as an eyesore when it was completed in 1762, but until now has rarely been open to the public.

Originally in the private gardens of Kew Palace, it was never intended to be for the public, just the King and his friends. Even after Queen Victoria opened the gardens to the public as Kew Gardens, the public were rarely allowed into the Pagoda. This is a pity as it is nine storeys high, and the views from the top are spectacular.

From this weekend though, it’ll be open to the public on a permanent basis, during the summer months.

The opening of the Pagoda followed a 6-year restoration, which saw the legendary, and in some cases, controversial dragons restored to the outside, and the revelation of a secret WW2 research project that had implications for D-Day.

Although very occasionally opened to the public in recent decades, the Pagoda was falling into the at-risk category of old buildings, and it was given to Historic Royal Palaces (who already maintain two buildings in the gardens) to undertake the restoration.

The building revealed some pleasing details, such as the brickwork was in very good condition and only 60 replacement bricks were needed throughout the restoration.

The archives had also revealed a dispute about the use of expensive copper for the roof instead of cheaper lead, but it turned out that underneath the red paint, the architect had evidently prevailed when sheets of copper we found.

Inside, they’ve largely preserved the interior as it was, which is rather spartan. The ground floor though has been given a makeover, as much to host the new ticket sales booth — with staff in full Georgian attire — and some information graphics that tell the tale of the Pagoda.

And two delightful animatronics which has a very Rowland Emmett aesthetic to them. 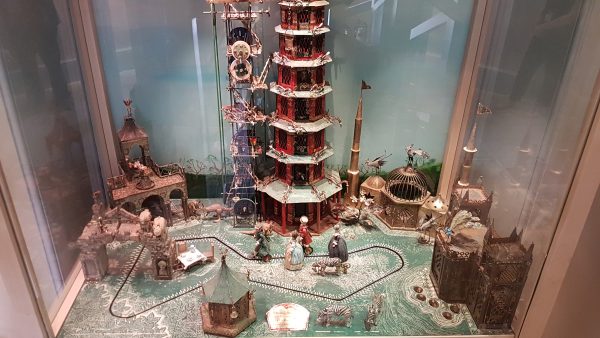 The original wooden staircase has been repainted leaving the telltale marks of long years of weathering and repainting still intact and giving the bannisters a much-loved feel.

Heading up, there are such large windows that it’s difficult to avoid the temptation to peer out as the landscape falls away. As we are walking up a lot of stairs, there are places to sit and rest. Some brand new benches have been commissioned and made from a number of different woods from trees found in Kew Gardens. 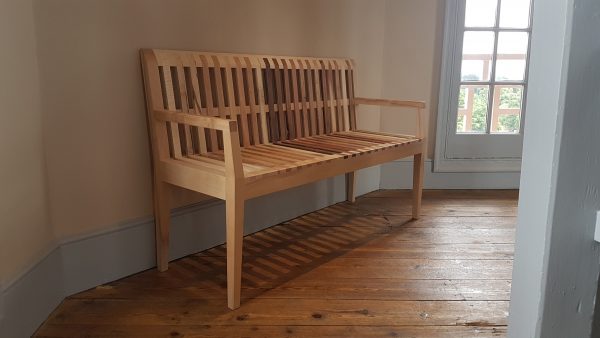 Look carefully at the side of the different coloured woods and the name of the tree used has been added, which is a nice touch. 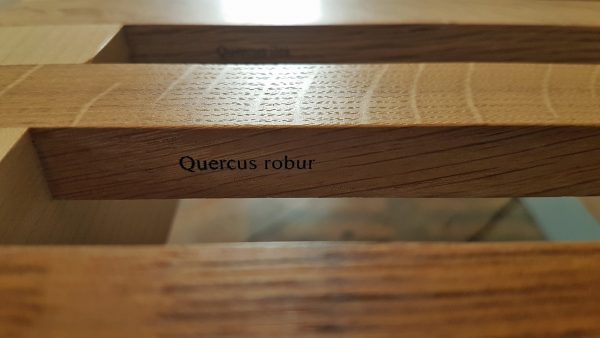 Another feature is a glass floor added on the 3rd floor to look down to the second. But, this isn’t just a fancy put in by the restorers, for if you look carefully, most of the floors have the marks of a trapdoor of some sort.

This is the recently discovered WW2 secret. 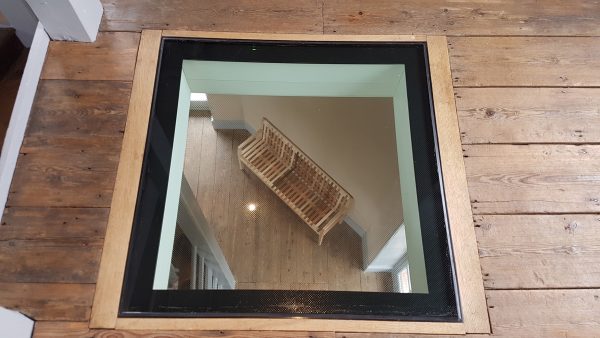 During WW2, scientists commandeered the tower for some secret experiments. They cut holes in the floors and from near the top dropped smoke bombs down to the bottom, to test how dense the smoke was as it dispersed. Sometimes the smoke must have been visible coming out of gaps in the windows of the Pagoda, but it was wartime, and people didn’t ask questions.

And just as well they didn’t, for the smoke was to be used during the D-Day landings to create smoke screens that could hide Allied forces as they attacked the Germans. The Douglas Boston planes that dropped the smoke curtains flew at around 50 feet above the waters — exactly the same height as the smoke was tested inside the Pagoda.

Carry on up the stairs. For the record, there are 253 steps to the top.

Of course, what you’re here for is the view from the top, and with a pant (or several), the top space offers the reward of looking over the treetops to the far distance. On a good day, the view reaches from Windsor Castle to the Shard. 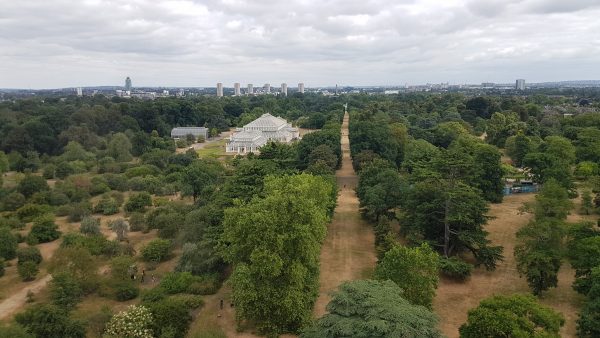 Rather than showing off what you can see today, they’ve put up signs showing what the King could have seen when looking out across the realm he ruled. One sign points to China, the inspiration for the design of the Pagoda, and rather earlier than the Brits would eventually end up ruling Hong Kong. Fortunately, with only one narrow staircase to use, the Pagoda is limited to just 35 people in at any one time, so the top shouldn’t be crowded either. 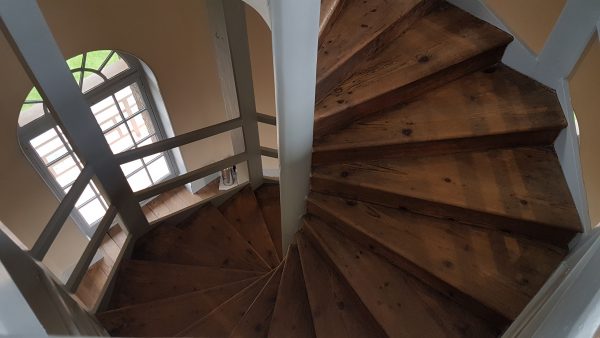 The most dramatic change to the Pagoda is however outside, with the dragons.

The dragons are a contentious subject and even though they appear in contemporary accounts and two paintings, there was some doubt about whether they ever existed. Fortunately, researchers found an invoice to the Royal Household relating to the dragons, and as swindling the King would have been a terminal affair, it’s reasonable to say the dragons existed.

In fact, the dragons were to prove to be the most challenging aspect of any structural changes to the Pagoda.

When the Pagoda was built, it seems that the wooden dragons were simply nailed to the outside. Heavy wooden dragons in the British weather were held up by just a few nails.

The myth that King George IV sold the dragons to pay a debt is just a myth. The reality is that they were rotting, and even in a private garden, lots of rotting dragons hanging on in the wind and rain by a thin iron nail isn’t a good idea.

The dragons were removed, presumed burnt on a fire as unwanted rubbish.

The difficulty facing the restorers is that heavy wooden dragons would need a bit more than a few nails to hold them in place today, but to add the necessary reinforcement would cost a lot, and involve considerable alterations to the building. These days, restorers experienced in trying to undo the damage of past restorations try not to add anything to a building that can’t be removed by later historians, so it was unthinkable that loads of extra steel would be bolted into the structure.

It seemed that the dragons couldn’t return.

What was needed was a way of not damaging the building by putting lightweight dragons on the outside.

Apart from the lower level, with much larger 1/4 ton dragons, all the rest running up the outside of the building have been 3D printed by 3D Systems, so their weight is a fraction of what it would have been in the past.

The problem solved, the dragons have returned to Kew once more.

And with their resplendent colours and golden wings, they really do add a Chinese sparkle to the building as the sun hits it. 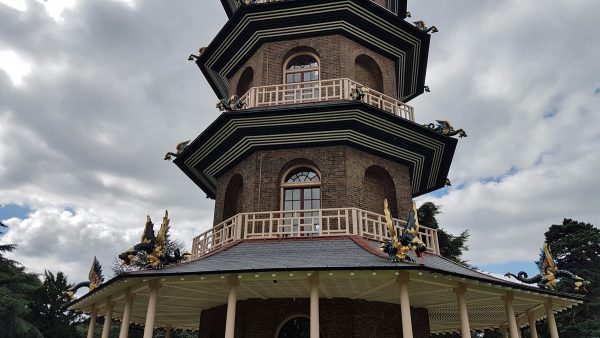 Without the dragons, the restoration would be worthy, and the views from the top outstanding, but the dragons elevate the building from simply interesting to exciting. 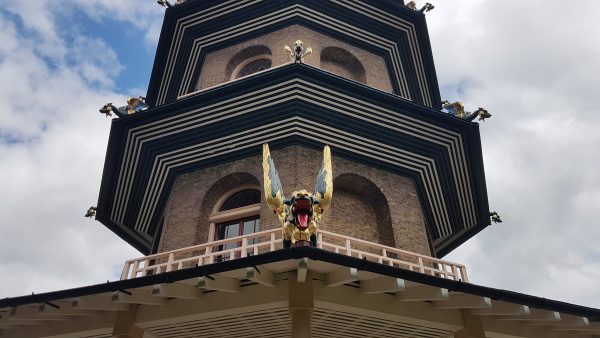 The Great Pagoda opens to the public this weekend. Entry is in addition to the usual entry fee to Kew Gardens. If you are a member of Historic Royal Palaces, then entry to the Pagoda is free, and you get 10% off the Kew Gardens entry fee. 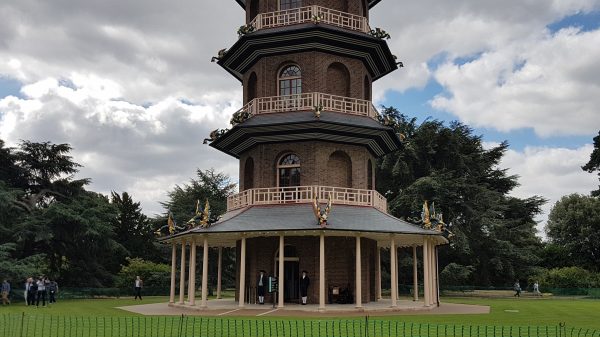