The Dr Who branded £10 bank note

There sits inside the British Museum a collection of banknotes and coinage — and an exceptionally rare Doctor Who branded banknote. 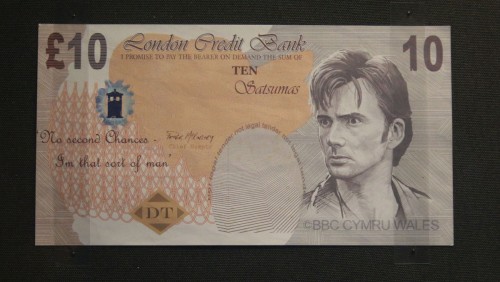 Sadly, never formally issued by any real bank, it was one of a batch made to deal with the legal ban on producing fake banknotes. In the 2006 Christmas special episode, a scene called for a cashpoint to spit out a load of banknotes.

To use real banknotes would be too risky with an audience of low-paid actors in the street, but it’s illegal to print fake banknotes that look real, and the Bank of England has strict rules about how to print fakes for TV shows.

Hence, a fakish banknote, one that would probably look like a banknote on TV, but would never be accepted as real in a shop.

Promising to pay the bearer upon demand ten satsumas, the ten-pound note is decorated with the face of the then Doctor, as played by David Tennant.

If you look very carefully, where the signature of the governor of the Bank would usually go, in this case, it has been signed by Peter McKinstry, Chief Numpty. He is a real person, and less a numpty than an artist who worked on Dr Who for five years. 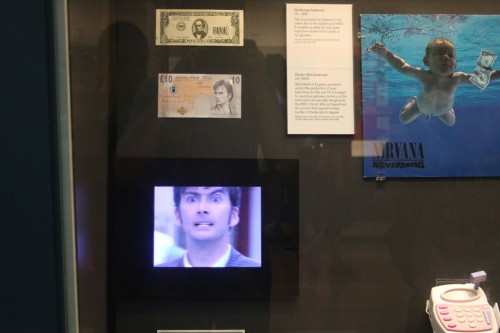 It’s a curiosity that the fake £10 note is probably worth vastly more than a real one. They literally printed money.