The day Londoners rioted against foreigners

Exactly 500 years ago today — on the 1st May 1517, a mass riot took place protesting against foreign people living in London.

The Evil May Day riot saw foreign residents being attacked by apprentices who were increasingly resenting the influx from mainland Europe, at both ends of the social spectrum, the Flemish workers and bankers.

The riot on the 1st May 1517 wasn’t unexpected, and indeed, the City authorities had ordered a curfew the night before to try and quell growing anger towards the foreign merchants.

The anger was fueled by an inflammatory speech given at Easter a few weeks earlier by a priest standing just outside St Paul’s Cathedral who called upon “Englishmen to cherish and defend themselves, and to hurt and grieve aliens for the common weal”

The priest, Dr Beal of St Mary’s Spitalfields said that “even birds expelled interlopers from their nests, and that men were entitled to fight for their country against foreigners.”

There were also allegations that the King gave too much favour to these foreign traders. A student of the time, Edward Hall wrote that the traders “boasted themselves to be in such favour with the king and his council that they set naught by the rulers of the city”

There were the usual claims that foreigners had preferential access to housing, that they stole English men’s women, and jobs, and ignored good English customs. All too familiar to modern ears listening to right-wing commentators, yet they are 500 year old allegations.

Over the next couple of weeks there were sporadic attacks on foreign merchants, but rumours were rife of a planned mass attack on May Day, where the city would rise up and kill all the foreigners.

The Thames would run red with the blood of foreigners.

With the situation tense, the curfew was announced and when a gang of youths were stopped at night by a City Alderman, John Mundy, he was forced to flee in peril of his life having failed to arrest the men.

It’s notable that the riot was reported to be an all-male affair, and one order from the time had required men to keep their women at home as the women’s gossip was fueling the rumours.

The following morning, a mob of young men, reputed to be a thousand strong gathered in Cheapside where they broke into jails and released prisoners who had been arrested for attacking foreigners.

It’s said that the mob was cooled by mollifying comments by King Henry VIII’s councillor, Thomas More, but when some stones hit an official, he reputedly screamed “Down with them”, sparking panic, and the mob started attacking any home or business that looked foreign to them.

Amazingly, no one was actually killed in the riot, and later that evening, the Duke of Norfolk entered the city with his army and put down the riot.

Several hundred people were arrested, but the King ordered a pardon for most of them following pleading from The Queen, Catherine of Aragon who was concerned for their families.

An unlucky thirteen were sentenced to death for treason — which will likely have meant being hanged, drawn and quartered, as was a financier, John Lincoln who was thought to have been the hidden instigator of the inflammatory speech back in Easter.

To keep the peace, within the week, some 5,000 armed troops from the army were patrolling the city, which we should remember was far smaller then than today, so that’s practically a solder on every single street corner.

Although the King had pardoned most of those arrested, the execution of some, and the heavy presence of the army fueled more resentment for a time, although it was now impossible to express it.

Many lessons can be learned from the Evil May Day riots, and over the centuries there have been allegations, often unfounded against foreigners working in London.

From the protestants fleeing mainland Europe, to Jews from Eastern Europe in the 18th century, and more recently the arrival of migrants from across the former British Empire, London has always been multi-cultural, but beset by tensions about strange people.

Almost every economist will tell you that immigration boosts the wider economy and supports job creation, but its difficult to explain that to people who are individually affected by cuts to wages from increased competition in their own particular trade.

Five hundred years ago London rioted against the foreigners.

Humanity hasn’t evolved far enough yet. It could happen again. 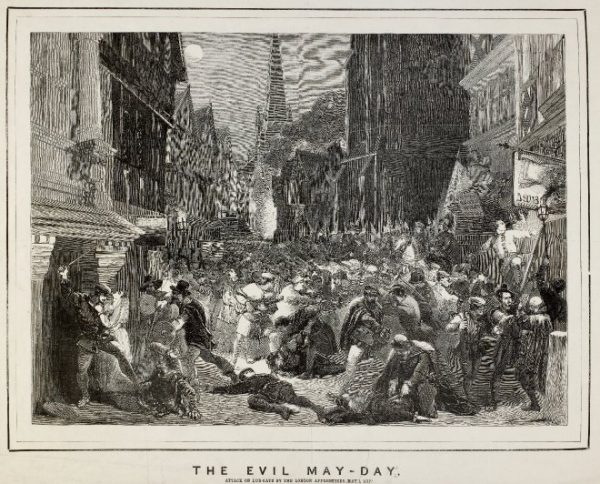