The danger of ladies hatpins on the London Underground

TO THE EDITOR OF THE TIMES

Sir, It is almost a daily occurrence that some accident of one kind or another has to be reported through the negligent way in which ladies wear hat-pins.

Last night about 6 o’clock I entered the tube lift at Post Office station, just at the time time when the crush of the people homewards bound is at its height when I saw two young ladies entering the lift just in front of me, both wearing two or three hatpins protruding about three or four inches.

While I was still contemplating on the very evident danger and trying in a pure sense of self-preservation not to come into touch with these uninviting necessities or the otherwise attractive toilette of the woman of to-day, one of the young ladies moved, in conversation with her friend, her head to one side, and one of her hat-pins went right into the eye of a gentleman standing next to me. It was quite a miracle that he was not seriously hurt or blinded in one eye, perhaps for a lifetime. He only complained of a momentary pain and, evidently no harm being done, very little further notice was taken of this incident.

But what would have happened if the man had lost his eyesight which after all was only saved by a fraction of an inch? Would he have been able to get adequate compensation?

As it was, the girl seemed to belong to the poor class, and shw could have hardly been expected to pay any damages, as in a case in the Law Courts a few weeks ago when a lady was fined £3 for having inadvertently scratches the face of another lady with her hatpin.

Besides, any monetary compensation would have been only a very poor consolation and both parties can be jolly glad that nothing serious had come of it.

But this is only one case, one case out of many. As a daily user of the tube, and the congested lifts in the morning and evening, I can invariably see people dodging protruding hatpins. There you stand in the lift, cramped in fro all sides, no room to move even your arm, and there in front of you, only a few inches away, a well-pointed hatpin is blinking at you, only waiting for the fair owner standing with her back to you and quite unaware of it, it move her head in order to give you a little souvenir.

Who has not experienced the same feeling? And who has not asked himself the question of how this nuisance can be done away with?

…he spoke about European laws that demand hatpins be of the safety variety, signing off…

Yours faithfully, ONE FOR ALL. 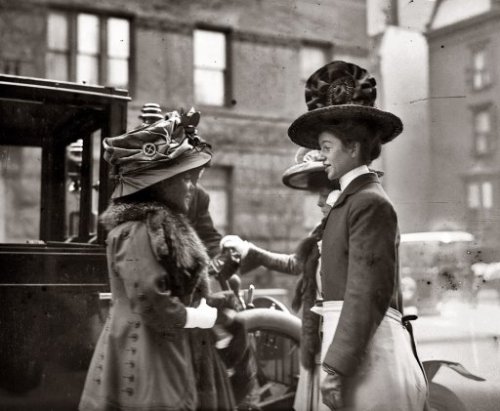