If you’ve ever noticed an odd disused railway bridge just to the west of Hammersmith station, it’s a curious legacy of a railway line that closed down exactly 100 years ago, and took with it two stations in one of the more complex patches of London’s railways. 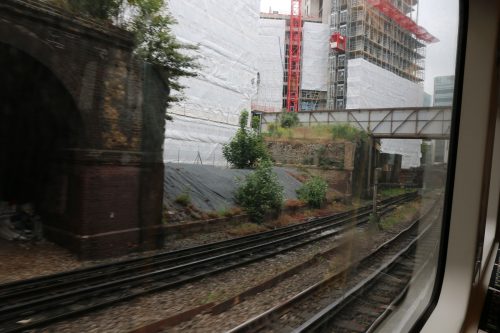 But it left behind echoes of its existence, including the almost famous bit of odd railway track by Hamersmith, and some strange building layouts to the north.

To the north is Shepherd’s Bush, and this railway line served the area — creating a link from the District line to what is today’s London Overground, and they also put a station on the link, called unsurprisingly, but confusingly, Shepherd’s Bush.

Over the years, there have in fact been a total of five stations all called Shepherds Bush, often at the same time.

The first Shepherds Bush station opened in 1864 on what is today the Hammersmith & City line half way between today’s Goldhawk Road and Shepherds Bush Market.

Just a few years later, in 1869, the now disused length of railway was built between Hammersmith and Kensington, and another Shepherds Bush station opened.

In 1900, the Central Line opened its own Shepherds Bush station. We now had three stations all with the same name within walking distance of each other.

Then, more recently, in 2008, the site of a disused station on the old Silverlink railway was rebuilt, also to be called Shepherds Bush — this time for the London Overground. That would have taken us back to three stations with the same name.

So, the Hamersmith & City line’s Shepherds Bush station was renamed Shepherds Bush Market, leaving two adjacent, but technically separate stations both called Shepherd’s Bush next to each other.

But back to when that other little known railway link was built.

It’s also a very confusing tale, but to simplify it greatly…

Back in the 1860s, the London and South Western Railway (LSWR) owned a number of railway lines running into London, and in order to improve connections with Richmond, it secured permission for a railway line running from Richmond via Hounslow and then to connect with the newish line today known as the London Overground at Kensington Olympia.

Just north of Kensington Olympia a junction, unsurprisingly called the Kensington North Richmond Junction lead to a curving railway line which looped back to the south and then continued past Hammersmith to run over new lines, which are today the District line tracks.

It’s easier to understand by looking at this map of the loop. The map doesn’t show Shepherds Bush station, but it sat where the OND of Richmond is on the map.

The short curve of track had the aforementioned Shepherds Bush station, but at Hammersmith, there was also Hammersmith (Grove Road) station which was just behind the current Hammersmith & City line station.

So in addition the complex of Shepherd’s Bush stations, we also had three Hammersmith stations sitting next to each other!

And, that is why there is a seeming curve of track on a viaduct from the District line at Hammersmith heading northwards — it’s the remains of that old curve line.

Sadly for the LSWR though, competition was fast arriving. What is today the District line came along and secured permission in 1877 to run trains over the same tracks from Richmond, but bypassed the Shepherd’s Bush loop by constructing their own tracks between Hammersmith and Earl’s Court.

Passengers naturally switched to this faster service. Finally, the arrival of the central line at Shepherds Bush in 1900 sucked customers away from its own station in the area.

Faced with a short length of track that was generally putting customers off than attracting them, the line was closed on the 5th June 1916 — one hundred years ago today.

The tracks almost came back into life in the 1920s though, as the Central line secured permission to extend its line via a tunnel to the tracks and also thence to Richmond. For some reason, a lot of railway companies (far more than mentioned here) had a curious obsession with running trains to Richmond.

Anyway, the Central line’s own plans fell through, and they eventually stuck with the extension to Ealing Broadway.

Any hope of doing something with this empty curve of railway was finally killed off in the 1930s as the Picadilly line extension required that it would take over the track between Ravenscourt Park and Turnham Green.

With no more use for the curve, the railway land was slowly sold off bit by bit. However, by the time this happened, most of the land around the railway had been built on as well, so rather than laying out a new housing estate, what has happened is that a curious curve of later buildings exists amongst the older estate. A curve that is noticable on maps.

Map curiosities aside, the last visible section that that lingering stump of a brick viaduct that sits next to the Picadilly and District lines next to Hammersmith station, and has been a topic of curiosity to commuters ever since.

Apart from the very obvious and to many, curious viaduct just outside Hammersmith Station, there are still signs of how the old railway affected later construction works.

Starting just outside Hammersmith, there are a number of roads passing under the railway, where you can see the remains of the viaduct sitting between the two other lines.

Here, a nicely repainted set of bridges sit either side of the remains of the brick railway arches. 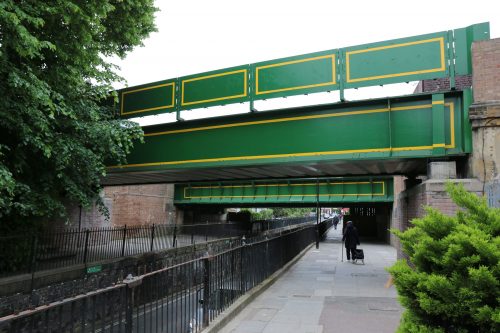 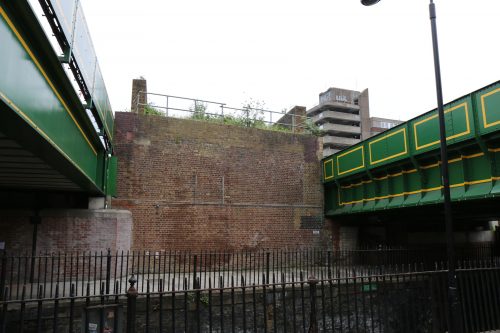 On a passing train, you can see the viaduct’s remains clearly.

At Hammersmith, you can see how the viaduct curves northwards away from Hammersmith towards Shepherd’s Bush 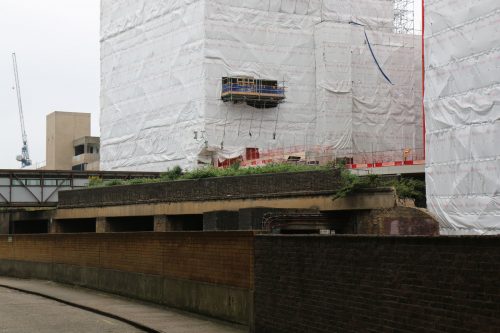 This monumental building sits on the site of the old Hammersmith (Grove Road) station. Although the station was actually set a bit further back, so was probably underneath what is now the office block’s car park. 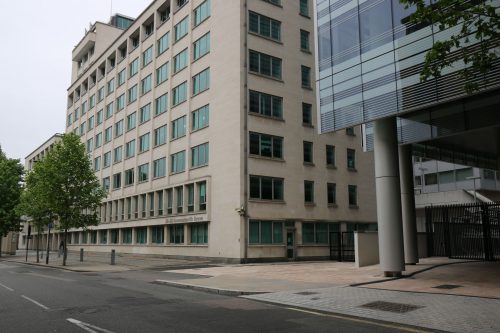 The railway then carried on northwards, where all sign of it has long since vanished other than this scary looking site covered in barbed wire, which is still owned by London Transport. 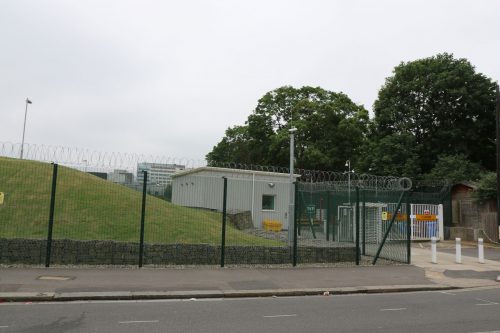 Further north, it passed underneath the Hammersmith and City line, though this now bricked up archway. 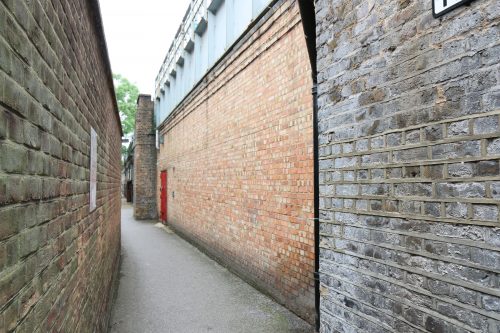 Here, the line passed through a cutting, and that has significantly affected how the area looks today.

On this road, the Victorian era houses would have looked over the railway, which is now marked by the row of much younger buildings on the opposite side of the road. 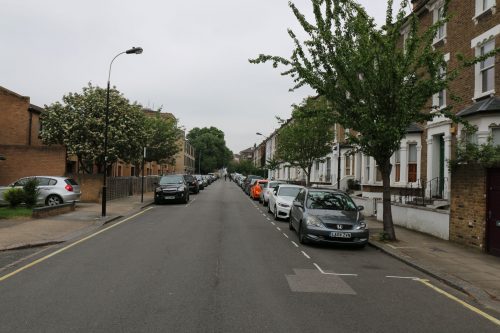 A bit further along, the the railway darted under a main road, and you can see in the end the arch — held up by iron beams — which is now a garage. 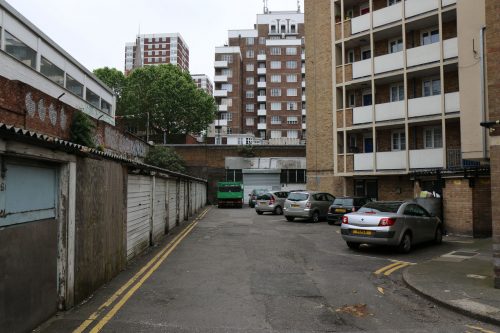 Behind the photographer, once stood Shepherd’s Bush railway station, and is now a newish block of flats. One occupant who spied my photo antics seemed fascinated to learn that her home sat pretty much right on top of where the old station platforms once were.

In fact, the road lines up perfectly with the old railway tracks. 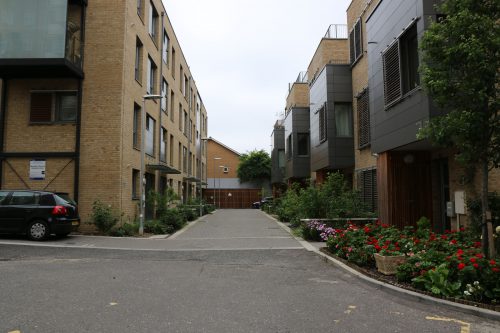 All along this route, the line of the old railway can be spied by a row of buildings all who sit a couple of stories below the road level in the area.

The next road along has a tower block on one side, and if you peer through the glass shutters in the lower level next to the road, you can just about make out the gap under the road which would once have carried the railway. A nicer view is available on the other side of the road of the bricked up archway. 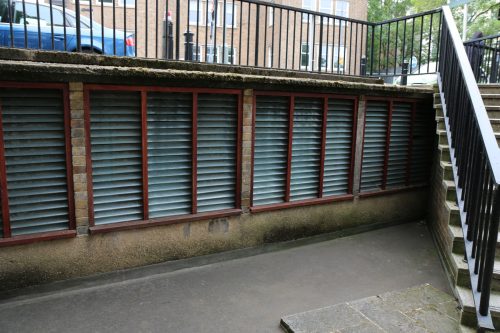 This huge long building occupies the entire length of railway line between two crossing roads, and eventually you get to a bridge that runs over the London Overground railway, and the junction of the long lost railway.

Here, the orange curving block of flats sits directly on top of the line of the old railway. 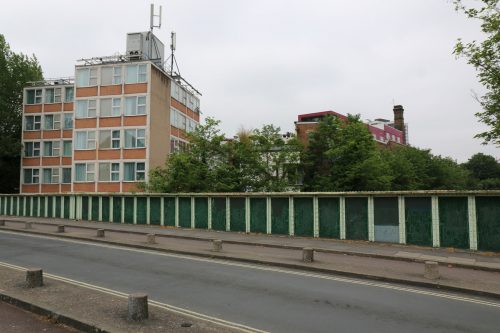 The old railway junction is no more, having presumably long since been ripped up.

So, that’s the story of how Shepherd’s Bush had five stations with the same name, and Hammersmith got a rather odd brick viaduct between it’s tube train tracks.

NB: There is a confusion about the closure date — some reporting 3rd June and others the 5th June. I’ve stuck to today, for the simple reason that I had put the 4th in my diary to take photos before my research uncovered the potential alternative closure date.