It’s actually a very short tunnel, being more of a subway under the double-carriageway road above, but it is historically significant, and very heavily decorated. The tunnel linked, for a very short period of time, a railway station and the Crystal Palace – but when that burnt down, traffic to the area dropped, and eventually the station was closed, torn down and is now a rather nondescript housing estate next to a medical centre.

The entrance to the tunnel from the housing estate side has been bricked up in the same style as the brick vaulting that supports the road above and is essentially invisible to the naked eye now.

As one side is a housing estate, it is unlikely that it could be reopened as a tunnel/tourist attraction, so the plans are to turn the rest space into an arts venue (why are they always arts venues?) and open it up to the public. 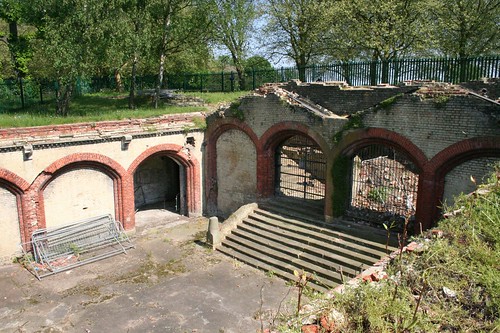 At the very least, they will open the tunnel to the public to have a look at – if they can get approval from the owners/councils/whomever to do so.

I think I’ll be up there like a shot for a look around if they manage that.

However, as a tunnel enthusiast, what excites me rather more about the area is a considerably longer tunnel that was also sealed off when the station closed down. 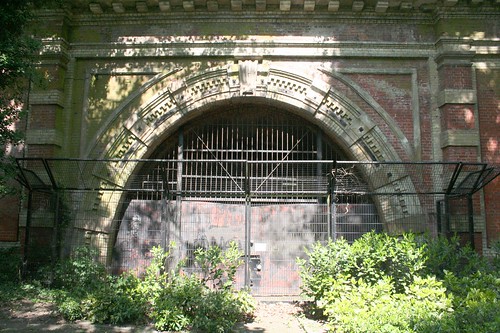 Here is the entrance portal to the Paxton Tunnel that runs around the North West edge of Crystal Palace park to the former Upper Sydenham Station. Although blocked off with metal gates, the tunnel still runs to the far end where it is solidly bricked up.

Standing next to the portal and letting out a wistful sigh, the extent of the tunnel could be felt thanks to a cool miasma drifting out of the tunnels. In fact, I am rather surprised that the houses sitting right next to the tunnel hadn’t used the cold air as a cheap air conditioner (it was a very hot day when I visited).

While everyone else wants to look in the small subway – I want to go into the much bigger Paxton Tunnel.