The Church of St Charles Borromeo

Wandering around the back streets near the BT Tower, I noticed an interesting looking Church and wandered over for a closer look. This is the Church of St Charles Borromeo on Ogle Street – named after Charles Borromeo, a 16th century Italian saint and cardinal of the Roman Catholic Church. 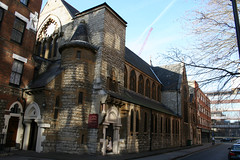 This is a Catholic Church – and despite its early English gothic appearance it is actually fairly modern – with construction starting in 1862 under the auspices of Fr J C Keens, who had earlier set up the parish of St Patrick’s, Soho. The cost of the building work was put at $4,600 and the land was donated by an anonymous benefactor. The size of the parish at the time was about 2,000 Catholics. The Church was completed, and then sanctified in May 1863, by Cardinal Wiseman.

The Church was very nearly demolished in 1905 and replaced with a factory as the lease had expired and the increasing commercial use of the surrounding land was forcing up the cost of land. After dragging on for some 16 years, Madame Meschini and her son Arturo brought the land and donated it to the diocese of Westminster.

The Church was damaged during the war. 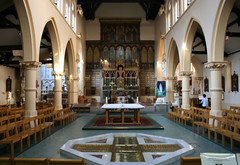 Thanks to buildings squashing the church somewhat, the entrance is by a less than impressive side door and into the usual small entrance hallway. Once through that, you are into the main Church itself, which is decorated in the gold and marble so favoured by Catholic Churches. It has a quite modern feel to it, no doubt enhanced by the many restorations and updates to the fabric of the building itself.

I personally prefer more gothic churches, so the interior of this one was a bit of a disappointment compared to what I expected based on the exterior design. Still, its not too bad and the colour is very dramatic.