We may live in an age where trains are bland tubes with garish colours and an announcement every 30 seconds, but there are still some good old fashioned steam trains in use on the UK’s railways. Not just confined to distant heritage routes, but some actually run right through central London.

It was to see one of these majestic metal beasts that had me up early on a Saturday morning to head over to Kennsington Olympia where I knew The Cathedral Express was due to charge through at 9:30am. The train actually runs from Waterloo station, but I thought it would be better to get photos away from the main station.

Alas, my morning was not a good one as I had forgotten that the Jubilee Line was out of action today, so I made my way over towards Earl’s Court convinced that I would probably miss the train as I hadn’t allowed extra time for the delays. I got to Earl’s Court and decided to take the next train to West Brompton station, which was easier to get to from there, and would still give me a view. The tube train stuck at the station for probably only a few minutes, but when you are up against the clock to get to your destination, it is incredible how it aches as you mentally beg the tube train to get a move on!

Anyhow, got to West Brompton and ran across the footbridge to the overland train side, hoping that I hadn’t missed the steam train. Saw a chap there with camera and tripod, and as he could only be there for one thing – I asked if I had missed the train.

Nope – got about 5 minutes he said, and my heart was able to calm down somewhat.

Alas, the sun was right in our faces so it was tempting to go down onto the opposite platform to get better photos – however I usually find that when I do that, one of those modern carbuncles comes along and gets in the way – ruining the photo.

Today though – I stayed on the footbridge and after a few minutes, you could hear that wonderfully nostalgic sound of a steam train in the distance and shortly afterwards white smoke was seen coming over the trees. 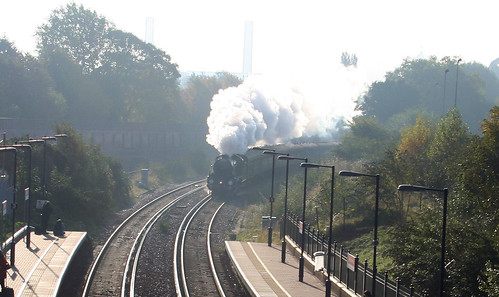 Then it arrived, charging through the station at full speed with the thundering roar of the engines and a massive blast on the whistle – almost as a tribute to the small gang of enthusiasts on the platforms taking photos.

As it past under the footbridge, we were enveloped for a moment in the warm embrace of the smoke from its chimney and we gasped on that memorable burnt flinty smell that can only come from the coal burner flaming away below us. 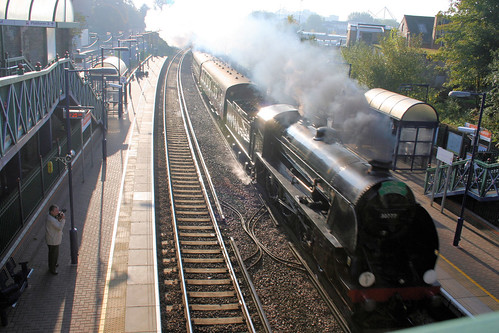 It took an hour to get there, in some panic – and the event lasted maybe 30 seconds. But what a wonderful 30 seconds it was.

There are a few steam trains which run from London mainline stations, but you have to be careful as they are often diesel hauled to somewhere outside the city, then hooked up to a steam engine.

There is a website – UK Steam Info, which maintains a list of steam train tours, and where possible also puts up the timetable so you can work out when to be at a spot along the route if you want to see them charge past.