The cartoons of Maggie Thatcher

Published 23 May 2009 by London exhibitions

Wandered along to the Cartoon Museum, which is conveniently close to the much larger British Museum. Like a fusion of the memes though, the Cartoon Museum focuses on British cartoons, going right back to the 18th century. 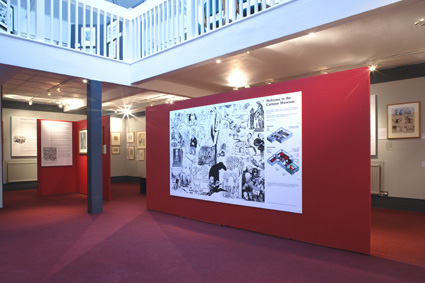 Right now, there is much more modern topic on display – an exhibition of about 100 political cartoons covering the Thatcher years, from the milk snatcher days to the time when David Cameron disavowed being a Thatcherite. The topics range from the obvious key topics of the recession, miners strike, Falklands, and downfall – but also included snippets about her as housewife, Victorian monarch and Britannia.

The display is curated by former government minister and Thatcher fan, Kenneth Baker and by Steve Bell of the Guardian, who is – to put it mildly – rather less of a fan. The combination of the two works well so you get a good range of cartoons and commentary which doesn’t shy from pointing out the divisive policies of the Thatcher era, particularly in the early 80’s recession.

I am quite a fan of political cartoons as it happens as I feel they convey something which is missed by the print and broadcast media – and that is a prevalent emotion of the time. The news is good at the facts (tabloids excepted of course), but the cartoons seem to add to the narrative in a manner which is often overlooked, but I feel very important to understanding social history.

Each cartoon comes with a few paragraphs of text to explain what was going on at the time and put the image into context. Although the Prime Minister herself was said to be disinterested in how the cartoonists drew her, one of the display cards noted that she did hate one oft-repeated drawn image of her in a blue and white hat, which apparently she only wore a couple of times.

Thatcher was one of those people who seemed to symbolise an entire government and era, and even today, people who weren’t even born when she came to power seem to have strong emotions about her, both as a person and a politician – presumably induced by proxy by their parents.

Whatever your opinions, there is enough on display to confirm your opinion (and prejudices) about her, regardless of which side of the political tracks you happen to stand on.

The exhibition is on until 26th July, and entry is Â£5.50. The Thatcher exhibition took about an hour to work around, and there is about an hour’s worth of other displays if you haven’t been before.

As an aside, I am quite excited about their next exhibition, which is the works of Rowland Emmett – a designer of wacky engines and flying machines with a particular and distinctive style. I am quite proud to own one of his signed prints (the original being in The Tate) and it hangs as one of two main paintings in my living room.

The images accompanying this blog posting were kindly supplied by The Cartoon Museum.

Another venue is The Political Cartoon Gallery which is within a short walk, and also worth a visit.