Four years ago a new form of street furniture started to appear in London, the Camden Bench, a specially commissioned piece of amorphous concrete designed to deter anti-social behaviour.

Quite what is anti-social will vary depending on the person, but Camden Council needed new seats for its streets, but also wanted to ensure they were for use by the correct sort of people.

So they commissioned the Camden Bench. 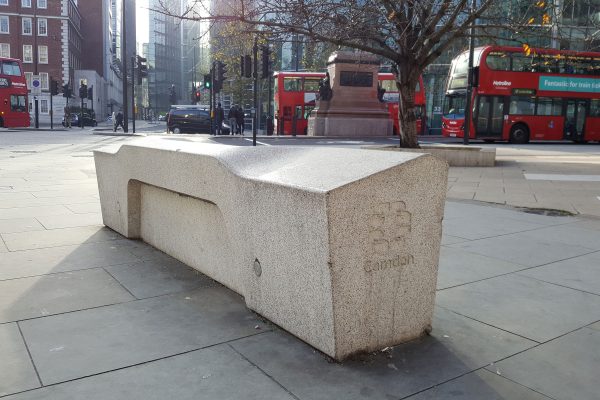 It’s a lump of aggregate concrete with just enough shape to suggest it might be a bench for sitting on, but none of the normal indicators that it is indeed, a bench.

In a land of mostly wooden benches, it’s a modern reinterpretation of the park bench for an urban setting.

While seemingly a utility for footsore Londoners, it’s primary design aim is to discourage the wrong sort of use. It offers rest to weary office bums, but offers no respite for homeless bums.

The slight angles on the top seem designed to make sitting more confortable, but actually make sleeping very difficult. In this regard, the Camden Bench is not unique, as many benches have arm rests, not for comfort but to ensure there isn’t enough space to sleep on them.

However, these lumps of municipal concrete go further, they are covered in a waterproof anti-graffiti coating. They lack any nooks and crannies for lazy people to stuff empty food packets – or drugs – into.

The irregular shape even makes them unusable for skateboarders who like to skim along surface edges. 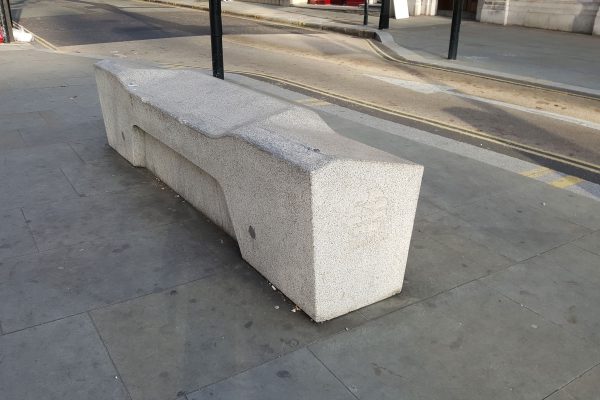 The aim to dissuade the wrong sort of use, or user, is not entirely unlaudable, but this rather ugly lump of concrete seems to have taken utility to the extreme and put municipal demands ahead of decorative pleasures.

It is possible to design things that encourage a certain sort of behaviour without looking ugly.

A good example are the “pig ears” — small inserts of metal in the edges of stone walls and benches, that look modest, but are deliberate, as they deter skateboarders.

Maybe skateboarders are not a menace to be controlled, but if they are, at least the control is aesthetically acceptable.

Anti-homeless spikes gained a lot of publicity in recent years, even though they have been around for centuries, but anyone ever complain about buildings with decorative stones embedded into the floor? Probably not, but they serve the same function — to deter people from sleeping there.

The issue is, if a council wants to nudge people’s behaviour, at least do so decoratively.

Not by using lumps of concrete, which while cleverly designed, are about as decorative as the urine filled corner of a council estate tower block.