The British flag flying on the moon

Over the weekend, over on another private website the old chestnut of the fake moon landings was raised, and sensibly put in the bin where it belongs. 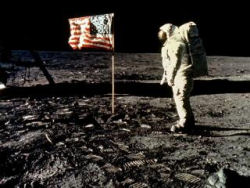 As part of the discussion, I mentioned one of the things I learnt when I was able to go on a tour of 10 Downing Street in 2006 and that is in the waiting area at the top of the famous staircase is a small Union Jack Flag along with a few pieces of moon rock – and the sign next to it said that the flag had been taken up on that famous Apollo 11 mission and been on the moon.

Blimy I thought at the time, the British Flag has been to the moon and back – and now sits in a small display case inside 10 Downing Street.

In an odd way – it was actually one of the most notable things for me of the entire visit around the place.

Anyhow, I realised that next year will be the 40th anniversary of the lunar landings, and considering that the UK government recently signed a deal to develop and send probes to the moon – wouldn’t it be an ideal opportunity to put the flag and moon rocks on display for everyone to see?

It could be quite an inspirational thing to show to school children – to say that, even if as just a passenger, the Union Flag has also been to the moon.

If you agree, then why not sign this petition I set up on the Number 10 website and lets see if we can get that display case out into the public – after all, it was a gift to the British people, so let some Brits see it!

..and tell your friends as well.