I have a small hobby of collecting old copies of the Illustrated London News – a venerable newspaper which was first published n 1842. I acquired a few more copies last week and scanning through the collection this weekend, came across a short news article about the infamous Big Ben bell and its arrival at Parliament. Although the news item was small, it was accompanied with one of the newspapers iconic large drawings of the event.

While the history of how the bell got its nickname of Big Ben is not entirely clear, the bell was never formally named and it is thought that the bell was to be called the Victoria Bell – and indeed, the caption accompanying the picture does call it the Bell Victoria. Proof at last?

The news item is dated Saturday June 5th, 1858 – and the bell was first chimed in position the following year, in July 1859. Just two months later though, the bell cracked as the clapper was too heavy and was taken out of commission and the hours were struck on the lowest of the quarter bells until it was reinstalled. To make the repair, a square piece of metal was chipped out from the rim around the crack, and the bell given an eighth of a turn so the new hammer struck in a different place.

If indeed the bell could be rung with a mere rap of the knuckles as was claimed, then it seems odd that the clapper was so heavy. Personally, I tend to suspect the news item follows the trend of the time, which is to over-state engineering efforts and make them sound better than they really were in truth.

In contradiction to the glowing report in the news item below, Big Ben has chimed with an odd twang ever since that repair and is still in use today complete with the crack.

I’ve taken a photo of the illustration from the newspaper (click for larger version) and transcribed the article below. My long term aim is to scan the newspapers with a decent scanner and archive them somewhere. Incidentally, note how the road and bridge names are spelt with a hyphen and lower cased second word – somewhat different to how we tend to write them today. 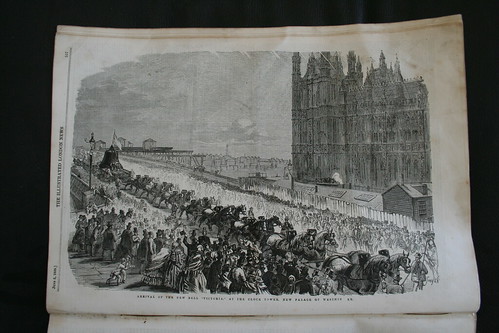