Published 8 July 2009 by Events and Tours

Another old City of London tradition occurred today as the Company of Vintners carried out their ancient procession to a local church following the inauguration of a new Master. The procession’s path is swept clean by a Wine Porter using a birch broom, while the Master and Wardens wear furred gowns, Tudor caps and carry posies. 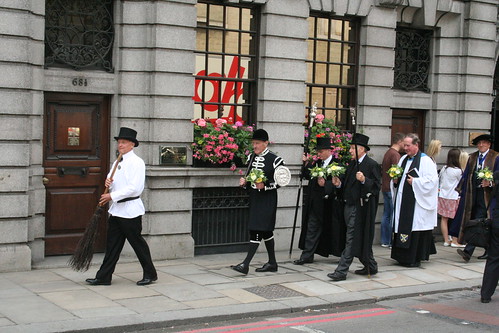 The procession is fairly short, from the Livery Hall, over the road and down a side street to the Church for a service. As the time approached, the police arrived and stopped the traffic (memo to other Livery companies doing processions – get the police involved!) so that they could pass over without being held up by indifferent motorists. As expected, the Wine Porter lead the way sweeping the street clear.

A small throng of photographers, your correspondent included darted hither and thither to get suitable shots and as we turned into the cobbled side street, there was quite a crowd waiting by the church.

The Company went in for their annual service and a few posed for us photographers. A tour guide had cleverly turned up with a gaggle of tourists to watch and was heard to loudly exclaim about the event, to some amusement from the rest of us.

They repeat the process going back to the hall after the Church service, but I didn’t hang around for that.

The Company itself can trace its heritage back at least as far as 1363, when its first formal charter was signed – although anecdotal evidence suggests that predecessors existed as far back as the Norman Conquest. The wine trade was of immense importance to the medieval economy – between 1446 and 1448, wine made up nearly one-third of England’s entire import trade. Since their first charter in 1363, it was the Vintners who presided over this trade. The Company lost a lot of its power and wealth during the civil war period and later the Victorians curtailed its monopolies as they did with the other guilds. Today it is largely a charity and educational organisation, although it still has some powers to grant liquor trading licenses without needing a local Magistrate.

Within the rankings of the Twelve Great Livery Companies of the City, The Vintners’ Company was placed eleventh in the order of precedence of 1515.

Like most of the City’s Livery Companies, the Vintners have their own Hall, and although the building is not the original, it has been on the same spot ever since 1446 – making it one of the longer continuous occupants of land within the City. The Hall itself was burnt down in the Great Fire of London. Rebuilding began almost immediately and the Court held its first meeting in the new building in 1671. 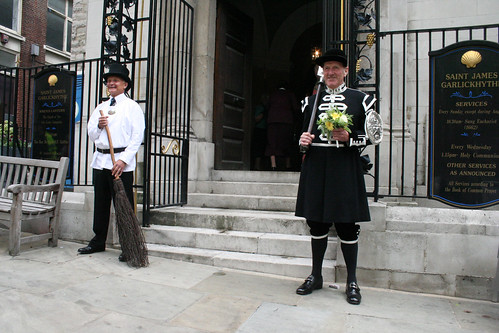 The Vintners are also important participants in the annual Swan Upping that will be carried out along the Thames in a couple of weeks time.