Long hidden behind other buildings, Stationers’ Hall is one of the largest and most opulent of City livery halls, and they’ve just started holding regular public tours. 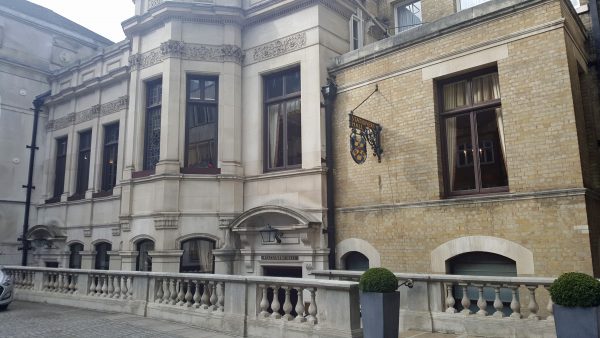 The livery hall has been sort of open to the public, if you hire it, or go in on Open House Weekend, but a few weeks ago, they started what aims to be regular weekly openings, with a tour guide.

For reasons which become clear later, tours do not start in the livery hall, but in the church next door, St Martin within Ludgate, one of Sir Christopher Wren’s designs. This is a church that, despite rebuilding in 1894 still has the original altar, a very fine font, and most curiously, a double width chair for the priest to sit on. Jokes about being for a fat friar don’t work though, as while the chair is wide, it’s also very narrow so wouldn’t have been comfortable to sit on.

The church is also unusual in that it doesn’t have a parish, and is formally a Guild Church, so serves the many livery companies in London instead.

The reason for starting the tour in the church becomes apparent though, as they have their own private back-door from the church into their garden. Stationers’ Hall is one of the very few livery halls in London to have a garden.

The huge plane tree in the centre, reputed to be over 200 years old is on the site of a dark period in English history, for which we need to look at who the Stationers were.

The Stationers’ Company was formed in 1403 and received its first Royal Charter in 1557, which granted it a monopoly on printing within the City of London.

Anyone who wanted to print something had to go to a member of the Company, and only they could print books or pamphlets. Most lucratively, they held the monopoly on printing Almanacs, for which there used to be a huge market.

During the religiously tempestuous periods of the Tudors and Stuarts, when printing seditious leaflets was rife, the Company had the power to seize and destroy unauthorised printed documents. It was in their garden next to the livery hall that seditious texts would often be burnt. Rather later, the huge plane tree that now stands in the garden was planted on the same spot.

The Company was also the first to issue copyright — in that the first printer to print a document held monopoly on the right to print copies — copyright. Although it was much later that authors were also granted copyright over their own works.

All these monopoly rights meant that the Company became very rich. So much so that in 1606, they bought a plot of land near St Paul’s Cathedral that is now home to one of the largest livery halls in the City.

That original hall, Abergavenny House was destroyed, as so many were, during the Great Fire of London, so what stands here today dates from around 1670, making it around 350 years old.

There are two entrances to the livery hall, the one we all use, which is actually in the basement level, and around the side under a covered entrance, a small door that is only used by royalty or the Lord Mayor of London. It was felt that such distinguished guests shouldn’t have to go down to the basement, so they have their own private door. 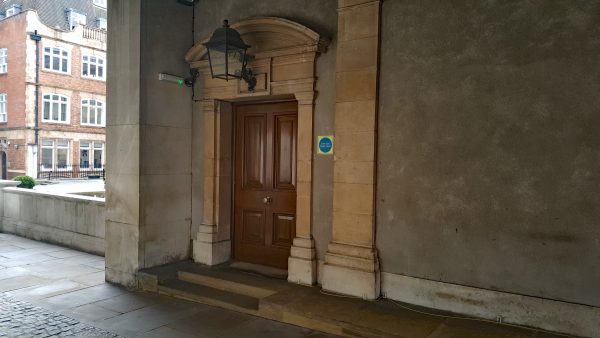 Inside, it’s lots of rich carpets and paintings and a series of large meeting rooms that once served for managing the monopolies on printing, and these days more often hired out for city folk to discuss city things.

A marvelously wooden paneled room has a German portrait of Bloody Mary on the wall, which seems apt as she was probably responsible for the Company doing its most prolific book burning activities.

If you’re the sort of printer who also has a coat of arms, then you can have a shield on display. It was pointed out that the curved hole in the shields are for jousting, and some are on the left, or the right, depending in whether the person is left or right handed.

A painting of a past master of rather modern design was gifted by a particularly rich newspaper publisher, but it’s the only painting given to the Company with a plain wooden frame instead of gilt with gold. 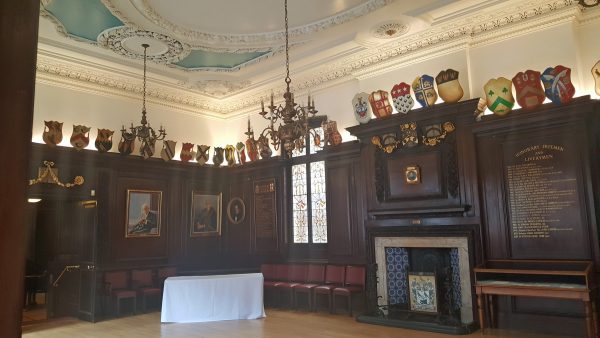 The main star of the hall is, well, the hall, with massive stained glass windows (added later). 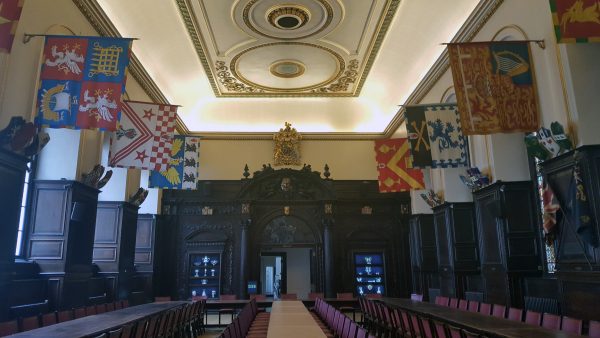 The long list of past Masters on the wall was pointed out, including one notorious name, R Baker, the printer of the Wicked Bible. This infamous edition missed out one rather critical word.

The word was “not”. Which made the commandment, Thou Shalt Not Commit Adultery rather more enjoyable to obey.

Unfortunately, the King did not enjoy the oversight, so the printer was fined a staggering £300 and banned from printing again. He died in a debtors prison, most of the copies of the Bible destroyed, and even today the few survivors are very rarely put on display.

Amusingly, there’s another typo in some of the decoration panels. Unless Jesus was a time traveller, he didn’t appear in the Bible during King David’s time. And that’s your next Dr Who storyline sorted out.

From mock-medieval, we go into gilt overload, with a fine court room for Company meetings with a lot of decorations around the walls and ceilings.

Do sit in the comfortable Master’s chair, even if it’s quite high and you feel like a child dangling feet over the edge. 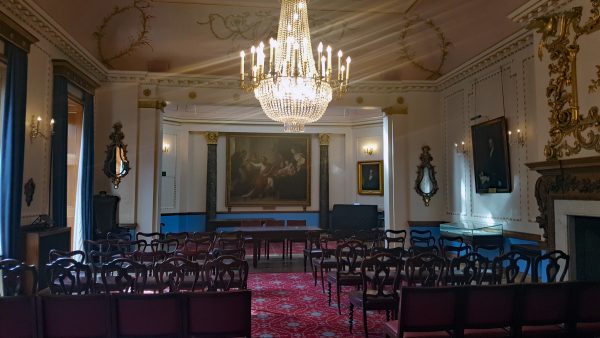 Tours end with tea in one of the main guild rooms.

Overall, there’s a lot of facts given out, loads of history as befits an ancient livery company and I barely touched on them. If you’re into City history or livery companies, then the tour, weekdays only at the moment, is one to add to your list of places to visit.

Tours of Stationers’ Hall cost £10, and take place on various days through the week. For details and bookings, go here.