Published 4 October 2011 by By Ian Mansfield Churches, Events and Tours

If you’ve never been inside Westminster Cathedral near Victoria train station, then you are likely to be in for a bit of a surprise, for despite being over 100 years old, they still haven’t finished decorating it.

And I hope they never do – as the contrast it generates between gaudy Catholic decoration and the unfinished brickwork above is amazing. 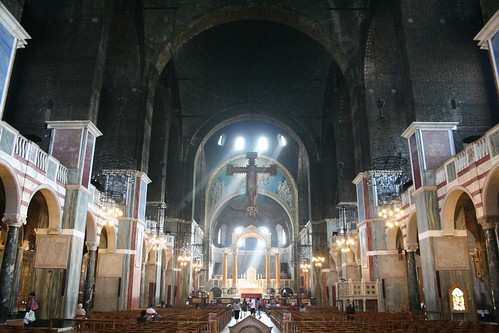 I went in a few years ago for a quick look when in the area for a meeting and had time to waste and have meant to go back for ages to take some photos. Which I finally did at the weekend.

The history of the building can easily be found elsewhere, but it seems that when Catholicism was restored to the UK, if they made an attempt to ask for their former Abbey back, it was declined. So they bought a plot of land from the Benedictine monks who established the Abbey and plonked a big Byzantine style Cathedral on that instead.

Unlike its gothic neighbour, entry to the Cathedral is free of charge, except for the tower tour or the exhibition area, which makes a pleasant change from the tendency to charge to look around big religious buildings.

What I love about the building is that in a way the upper half reminds me somehow of vast Victorian brick arches for railway tunnels, blackened by soot from passing trains. Yet, the lower half is a magnificent display of marble and gold which not only contrasts with the rest, but to my mind, works really well with the plain upper areas. If the whole building was covered with mosaic, it would be too much.

The gloomy interior also works well on sunny days to give the bright shafts of light that stand out strongly thanks to the recently finished service pumping loads of incense into the air. A very different effect to that offered by Gothic Cathedrals with their walls of stained glass, but no less mystical. 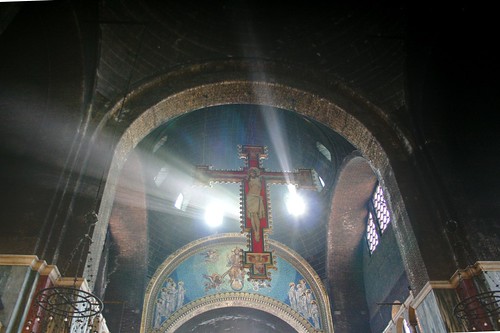 The Treasures of Westminster Cathedral exhibition is a newish display made up partly of a the history of the building, including an impressive wooden model and a side room filled with the sort of gold trinkets that seem to dominate churches for the poor. 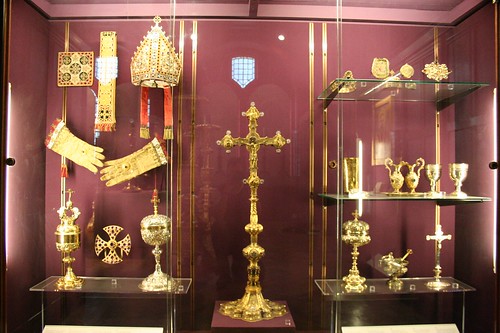 Dotted around the display are the usual cabinets with gold crosses, crowns and bits of religious iconography. A big case with some robes seemed more important to them than I would personally have thought, but they looked very Catholic and suitable for the display. 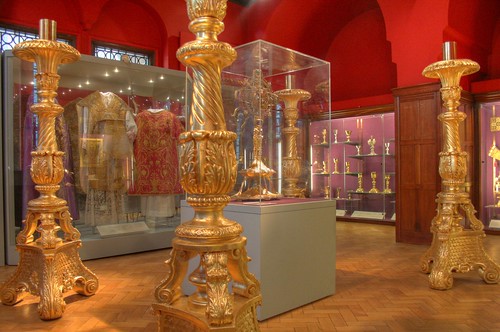 One case full of saintly relics seemed odd in here, as I would have thought they would have been downstairs for worshippers, or maybe relics are not venerated quite so strongly any more?

I went up during a service, so couldn’t (and frankly wouldn’t) take a photo in the open area with the wooden model as that is open to the parishioners below, but irritatingly the chap said the service would last at least half an hour more so I decided to leave. The service finished a few minutes later.

Time it right, and you’ll get some excellent views of the Cathedral from an higher level than most people normally see it.

Like most big church buildings, this one has set aside some space in the basement to sit and eat. The Cathedral Canteen is most certainly a canteen though – not a cafe or restaurant.

But where else in Westminster can you get a coffee and scone for £2?

1 Pings/Trackbacks for "The amazingly gloomy interior of Westminster Cathedral"