A water pump on the edge of the City of London that was praised for its clean clear water, that killed hundreds of Londoners.

This is the Aldgate Pump.

A water pump at Aldgate can be traced back to at least the time of King John, and such was its importance that it was considered to be the point that roads from London were measured from. But don’t try that today as the pump was moved in 1876 from its original location.

It was mentioned in John Stow’s 1598 survey of London, which described the execution of the Bailiff of Romford on the gibbet “near the well within Aldgate.”

In “The Uncommercial Traveller,” Charles Dickens wrote, “My day’s business beckoned me to the East End of London; I had turned my face to that part of the compass… and had got past Aldgate Pump.”

The pump used to be famed for its water, which was described in 1868 as being of “bright, sparkling,, and cool, and of an agreeable taste”. This was at a time when water wasn’t judged by whether it was dangerous to drink, but whether it was pleasant to drink. The dangerous water – small beer story is largely a myth.

But back to the pump, and its delightful water. Experiments found that the pleasant taste came in fact from calcium in the water, leaching out from bones of the dead the nearby graveyards.

The dead are tasty it seems. Dead tasty, for many were to die..

There came a period in the mid-1870s when the water became fouled and organic matter from the dead was now being added to the water, which flowed in streams from as far away as Hampstead.

Despite reports being filed of problems with the water, such was its reputation for goodly drinking, that many refused to believe them. In October 1875 though, a local vicar took samples and sent them for analysis, and the Sanitary Record described the war as “positively impure, contaminated, and dangerous”.

The polluted organic matter killed several hundred people until an investigation by the Medical Offer of Health for the City closed the pump.

A popular song of the time:

Flow down, false rivulet, to the sea,
Thy sewage wave deliver;
No longer will I quaff from thee,
Forever and forever.

The dust of citizens of yore,
Who dwelt beside the river,
And leakages of sewers pour,
Into thy stream forever.

A thousand hands may pump from thee,
A thousand pails deliver,
Their sparking draughts, but not to me,
Forever and forever.

Oh, let them lock thy nozzle up,
And drain thee to the river;
Nor any mortal fill his cup
Again from thee forever.

The replacement in its new location was connected to the mains water supply by the New River Company, and its safety assured, even if the bright clean taste was no longer improved by the bones of the dead. 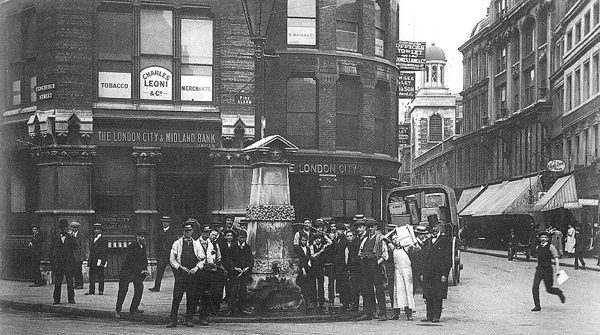 The current pump is made from a type of Limestone, which is rather ironic, as limestone is largely made from calcium carbonate, the very material that gave its waters such a refreshing taste.

One the front is a brass wolves head, as the site is claimed, if not proven, to be the location where the last wolf in London was slain. 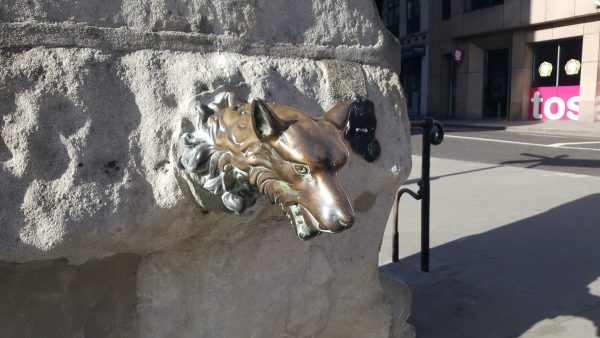 The pumping handle is now locked in place, and the large basin that once sat in front has been replaced with a small modern drain, which seems more optimistic of the pump returning to use than of practical application.

There is the crest of the City of London at the top, with the flag of St George and the Sword. It used to have a gas lamp on the top as well, but that has long since vanished, possibly in 1927 when a bus hit the pump and nearly destroyed it. 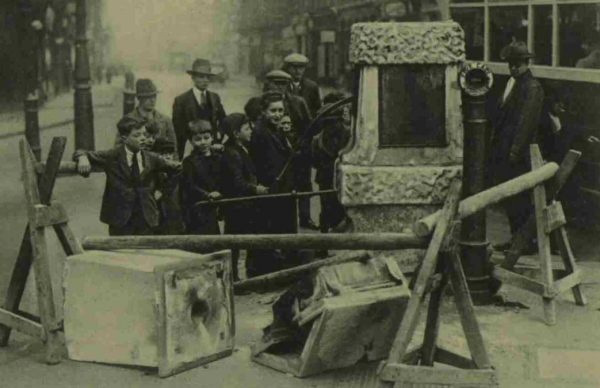 A curiosity that I have not been able to prove is that a dispute arose in July 1908, when the Water Board increased the cost of piped water, so people started to take water from the Aldgate Pump in large quantities, for free, claiming that an Act of Parliament permitted free water from the pump, for personal use. 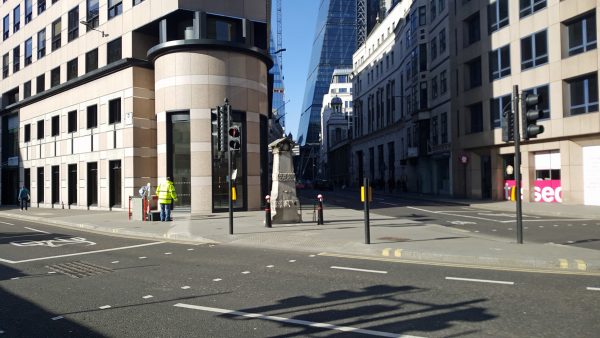 Today, the pump in all its faded glory sits on the corner of the road junction between Leadenhall Street and Fenchurch Street, an old curiosity surrounded by modern buildings.

UPDATE – the pump is now being restored to working order by the City of London. Details here.