I was walking home along the south bank in the mid afternoon when I suddenly spotted a number of huge airships in the distance flying over London.

A quick shout to whomever it was I was with at the time and we all pulled out our cameras to take photos and slowly the crowd around joined in as the fleet of airships became more noticable.

Planes joined them, some small, some larger more obvious, but all a bit too far away to see which sorts. I swapped over to the zoom lens, which then started to jam and stick in a most frustrating manner making taking a photo of a bubble-helicopter that flew really close as difficult as the target was close.

Suddenly in the distance we could see what appeared to be the colours of the red arrows, but a long way away and unusually high up in the sky.

By now someone had found out that this huge armada of planes and zeppelins was a flypast going over the Oval cricket ground, which was by now inexplicably directly ahead of me, on the south bank, facing east.

A fellow blogger turned up and we chatted for a bit while trying to find a better vantage point as the crowds grew, and wandered over to a bridge which seemed to offer a direct line of sight down a narrow alley way towards the cricket grounds.

Sadly the close buildings made getting photos very difficult, but a massive airship could be clearly seen hovering over the Oval.

A builder was working on a building site close to us, and suddenly a valuable violin fell through a hole in the floor on the building site and smashed to pieces on the scaffolding.

Then I woke up and the dream ended.

Not often, but just occasionally, my dreams are unusually vivid, and surreal. A medieval IanVisits might have called it a religious vision. The modern day one is less superstitious, but still awed at they mysterious processes at work while we sleep.

The brain is a strange thing at times. 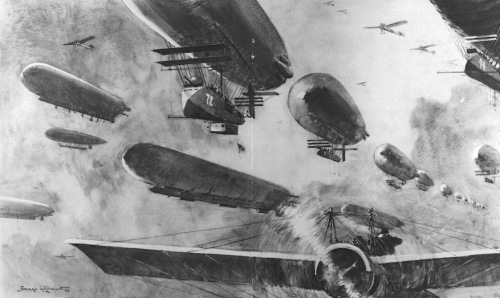 A warning from the Illustrated London News during WW1