Unbuilt London: A travolator on top of London Bridge

When London Bridge was being shipped off the to USA, one of the ideas mooted for its modern replacement was a high level, covered travolator to help speed pedestrians from the railway station to the City. It fitted in with the notion of separating pedestrians from motor vehicles by more than a simple kerb, and elevated the pedestrian to a dedicated private walkway, as is still found dotted around parts of the City of London today. 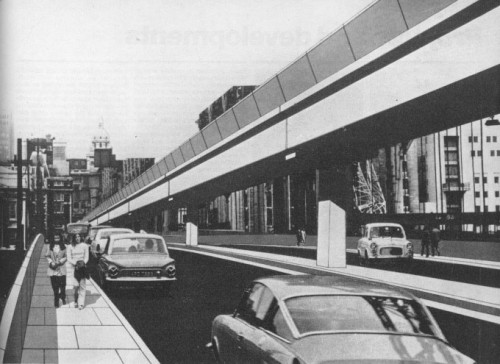 However, while those are simple elevated paths, the impressive looking structure for London Bridge would have also included an experimental high-speed travolator, known as the Speedaway.

This was developed by Dunlop, who built a demonstration model in Geneva in 1972. 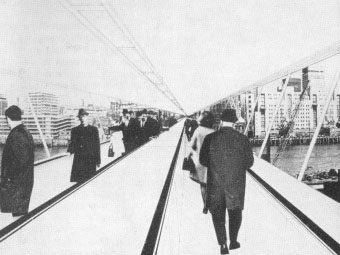 The Speedaway was a combination of the familiar ribbed rubber moving belt Starglide system and the Integrator, a pavement of moving aluminium treads having a peculiar geometry that permits access at walking pace and gentle acceleration up to 12 kmh.

That is considerably faster than the 3kmh usually found on travolators, which is also the fastest it is felt that people can comfortably enter and leave the moving walkway.

Dunlop’s design either had two walkways, with a slower one feeding sideways to a faster moving line, or more intriguingly, a curved approach, which could accelerate the speed by twisting the plates that people stood on.

In London Dunlop talked up the possibility of linking north and south banks of the Thames by a Speedaway across London Bridge which could later have been extended north to Liverpool Street station. They also proposed a 2p fare for the service, to fund its construction, which was estimated at around £1.5 million per km. 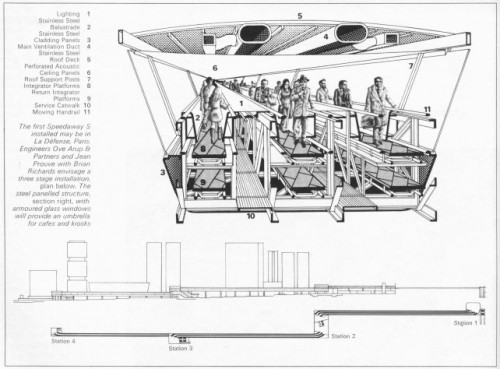 Costs aside, one of the biggest concerns about a high-speed travolator was in case of accidents. People stopping suddenly on a normal travolator are going to be thrown around violently, but at 12kph?

Obviously, the travolator was never built, which in this case, as anyone who has crossed the bridge on foot in the middle of winter will confirm, was a mistake.

It needs to be looked at again.